Frustratingly Awful Wave a Waste of Potential, Talent and Time

Normal everyday American teenager Cassie Sullivan (Chloë Grace Moretz) has been witness to the end of the world. When visitors from another galaxy arrived, she and her family suffered through the worldwide blackout, the torrential floods and terrifying bird flu pandemic, all of which combined to wipe out the majority of the Earth’s population. Separated from her parents, her only concern now is to protect her little brother Sam (Zackary Arthur). But when he’s spirited away by soldiers claiming to be ushering him away to the safety of a military base, Cassie becomes obsessed with tracking him down, doing her best to avoid alien assassins as she makes her way cross-country to be reunited with her younger sibling. 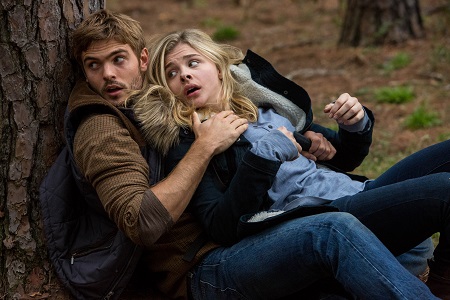 I’ve not read Rick Yancey’s The 5th Wave, a best-selling piece of young adult fiction that spawned an equally successful pair of sequels, but I feel pretty safe in saying fans of the trilogy likely won’t be all that excited about director J Blakeson’s film version. The man has talent, anyone who has seen his striking, unsettlingly perverse 2009 debut The Disappearance of Alice Creed knows that, and by and large this is an exceedingly well-constructed motion picture made by someone who knows what he is doing. Problem is, the script as credited to Susannah Grant (Erin Brockovich), Akiva Goldsman (A Beautiful Mind) and Jeff Pinkner (The Amazing Spider-Man 2) grows increasingly silly as it moves along, becoming an unintentionally hilarious piece of idiotic dreck that’s nothing short of a complete waste of time.

Pity, because as much as the film is pulling from the Independence Day, Maze Runner, Invasion of the Body Snatchers and Hunger Games playbook, the initial setup that sets things in motion is moderately intriguing. Watching events play out, seeing how the world descends into chaos, there’s something fascinating here, the level of suspenseful intrigue more than enough to pique my interest. Additionally, Blakeson has cast things exceedingly well, the mixture of young talent (Moretz, It Follows sensation Maika Monroe, Jurassic World newcomer Nick Robinson and British heartthrob Alex Roe) and established veterans (Liev Schreiber, Maria Bello and Ron Livingston) strong.

Moretz is the focal point, Cassie a fairly obvious Katniss Everdeen meets Tris Prior meet Ellen Ripley clone that the talented actress manages to make worthy of staying interested in even when the scenario itself runs wildly off a cliff into stupefying nonsense. Somehow she is able to establish a bewildered emotional tone that’s invigorating, seeing her transform into a driven freedom fighter for the human race wonderful throughout. She is the one that makes the movie something close to passable, and without her I imagine I’d be hard-pressed to come up with a single solitary reason potential viewers should give it even a passing thought.

After the initial four alien attacks on the planet, nicknamed “waves” (thus the title), two competing storylines takes shape. One involves Cassie traveling to find her brother, hooking up with a mysterious survivor named Evan Walker (Roe) who knows far more about what is going on and why than he probably should. The other involves one of her former high school classmates, Ben Parish (Robinson), transported to one of the last surviving military bases and tasked with helping lead a cadre of fellow child soldiers to fight against the invasion by an uncompromising Army Colonel (Schreiber) whose bloodlust to kill aliens seemingly knows no bounds. These two narrative tangents run on parallel paths, ultimately combining in a way designed to bring events to culmination yet also set the table for events hopefully to come. 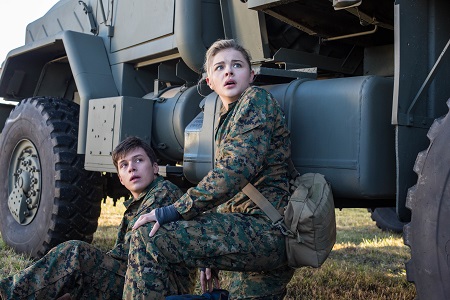 Not that sequels are likely to see the light of day. As charming as Roe might be and as menacing as Schreiber undeniably is, when both actors enter into the picture things begin a slide into ineptitude that would be impressive if it wasn’t so all-encompassing and disastrous. Maybe this is a problem with Yancey’s source material, maybe it’s just that the screenwriters collectively ran out of ideas and didn’t know what to do, but either way you look at it none of the big reveals are even moderately shocking. More, the supposedly thrilling dramatics that fuel the final third are so insultingly stupid all they do is provoke cavalcades of laughter out of the mouth of the viewer. It’s downright terrible, and for a movie that had me initially engaged on so many levels, to call this disappointing would be an insult to most things that disappoint.

I won’t say The 5th Wave is the worst thing I’ll see this year, but it might be one of the films that ends up wasting the most inherent potential. With a terrific cast and a director who at least is making an attempt to shake up the literary dystopian status quo, there’s really no reason for this one to be as outright terrible as it ultimately proves to be. But that tends to be January for you, and anyone expecting anything different should probably avoid buying a ticket and instead pin their hopes on something, anything else hitting theaters over the next couple of weeks other than this.