It is 2008. The housing crisis is slowly strangling the economic the lifeblood out of American citizens rich, poor and everywhere in-between. Dennis Nash (Andrew Garfield) should be a shimmering example of what the Middle Class can be, a hard-working carpenter and tradesman lauded for his skill. But as no one is building houses he’s been unemployed far longer than anyone of his talents should be, and even with his driven, equally industrious mother Lynn (Laura Dern) bringing in extra dollars as a neighborhood hairdresser the single father is still in court arguing against a bank attempting to foreclose on his family’s home.

The man in charge of the foreclosure is Rick Carver (Michael Shannon), a local realtor who has found economic salvation in taking care of these sorts of situations for the banks turning a tidy profit in the process. While holding no sympathy for Nash or his situation, he still sees something in the family man that he thinks he can both exploit and nurture, tutoring him in his business discovering has a real talent for it. It’s a deal with a devil, something the hardworking everyman knows yet allows himself to get into business with even with anyhow, the determined father only concerned for the welfare of his mother and son (Noah Lomax) and little else.

Considering the subject matter, no one going into a screening of 99 Homes should be anticipating light, frothy entertainment. Director Ramin Bahrani  (At Any Price, Goodbye Solo), working from a script he co-wrote with collaborators Amir Naderi (The Runner) and Bahareh Azimi (Chop Shop), isn’t known for composing light pieces of fiction. Instead he’s intent to tackle tough, complicated topics looking at things from the point-of-view of those hardest hit by the social and economic cataclysms assaulting them. There are no easy way outs in Bahrani’s world view, fewer happy endings, and even when the right thing is done and the soul’s salvation is achieved the likely outcome is still littered with tragedy and emotional ruination.

That being that case, anyone who tries to say this movie isn’t terrific hasn’t the first clue what they are talking about. While not perfect, even with an ending that’s far too preordained and contrived than it needs to be, this is still an authentically realized stunner that packs a mean wallop, analyzing the financial crisis and the housing collapse in ways that feel intimately genuine. There is a purity to Nash’s journey that, as difficult and as catastrophic as it might be, is innately universal, and considering we’re in the early stages of a new Presidential contest this unquestionably is a story everyone, everywhere owes it to themselves to hear.

Shannon dominates, commandeering every scene he’s in with a confidently snarky bravado that’s all-encompassing. You can tell he’s shut down so many pieces of his own humanity to do the job he’s now doing he’s not moderately certain how to turn them back on again. More, he’s not sure he wants to. While he longs to be a good father to his daughters, while he wants to be a loving husband to his wife, his newfound largess allows him pleasures he can’t help but indulge. Truly, the only thing that matters is getting bigger, accumulating more properties, more influence, Shannon showcasing brilliantly how a man can become a living, breathing shell even if his initial intentions might have been pure.

But the greatest thing Bahrani does is remind the world of Garfield’s talents. While his performance might not be as expressive or as flamboyant as his costar’s that does not, however, make it any less superb. After spinning his wheels doing the charming thing (quite well, it should be stated) in a pair of lackluster comic book adventures, to see him throw himself inside such a complex, decisively dreary drama is a real treat. Even if what ends up happening to Nash isn’t a shock, the way Garfield gets there is masterful, a scene standing in the middle of a swanky new house all alone, one he thought his family would be ecstatic to own only to discover the exact opposite was true, poignantly shattering thanks to the actor’s stark, internalized subtlety. 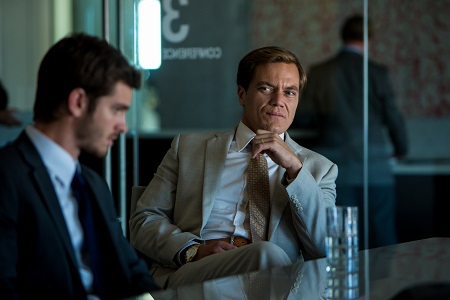 Bahrani and his creative team almost can’t help themselves at times, bending towards melodramatic convention in order to make sure Nash’s narrative arc runs the way it needs to in order for audiences to get a full idea of what it is the filmmaker is talking about. Problem is, these last few scenes are much too contrived, much too forced, robbing the picture of some of its power and diluting its emotional effectiveness. There’s a level of didacticism that’s annoying, and even if Garfield and Shannon are both sensational during this sequence the contrived artificiality of what’s transpiring isn’t helpful.

The fact 99 Homes remains as magnetic and as enthralling as it does is a testament to just how phenomenal the remaining components, as well as the entire cast’s collective performances, prove to be. Bahrani doesn’t mince words, leaves little unsaid, ultimately crafting a timely drama of turmoil and circumstance that if people can’t learn lessons from they might as well as dig a hole in sand and fill it with the entirety of their ignorant empty head.