A dog (voiced by Josh Gad) is born and begins to wonder why it is here. Eat? Sleep? Run? Play? Is that all there is? Maybe it’s about making friends with these “people” things running around on two legs? Are they important? One of these creatures takes particular interest in the Golden Retriever, an 8-year-old boy named Ethan Montgomery (Bryce Gheisar). He loves the dog, even gives him his own name, calling him Bailey, and for the fluffy four-legged mammal being with this kid, loving him dearly, that’s exactly what he’s been put here on this Earth to do. 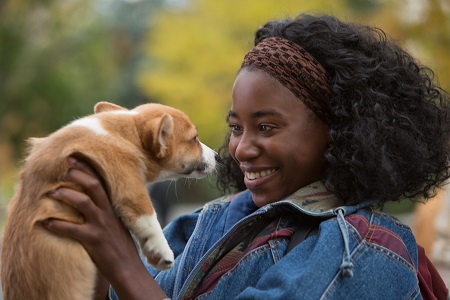 Years pass. The dog gets older and, after a decade of faithful and loving friendship sadly dies, only to be reincarnated as a female German Shepherd working for a courageous Chicago police officer named Carlos (John Ortiz). After that life ends, the dog returns again, this time as a cute Corgi adopted by kindhearted academic Maya (Kirby Howell-Baptiste), watching her go from struggling college student, to doe-eyed girlfriend, to confident wife and mother in the blink of an eye. The dog comes back once again, this time as a giant Australian Shepherd/St. Bernard mix who is mistreated horribly by its owners. But, released into the wild to figure out how to get by all on its own, the animal comes across a peculiarly familiar farmer (Dennis Quaid), the smell coming off this kind gentleman unmistakably recognizable.

Okay. So as far as the new movie A Dog’s Purpose from three-time Academy Award nominee Lasse Hallström (My Life as a Dog, The Cider House Rules) is concerned, there’s obviously one heck of a lot to unpack here. Based on the best-selling book by author W. Bruce Cameron, who is just one of the five screenwriters credited with the adaptation, the story is a canine-view of life and its myriad of mysteries. It’s a metaphorical tale of friendship, heroism, forgiveness and fate that travels through roughly a half-century only to arrive back where it started, it’s themes as obvious and as ham-fisted as they are oddly affecting and sincere. In short, those that choose to go with the flow and let the not-so-subtle emotional charms fueling things work their magic are likely to come out of the theatre sobbing in heartfelt joy. Everyone else? Well, they’ll have a bone to pick with the film, and it’s likely they won’t be able to stop barking about their issues.

Another item to keep in mind? Unlike Marley & Me or Old Yeller, the latter of which is the far superior motion picture even if both tend to get mentioned in the same sentence, the dog at the center of all this fantastical melodrama doesn’t meet its end in some climactic way designed to resolve the story and tug at the heartstrings. No, this dog dies a good half-dozen times, only to return in a new form to live a supposedly different life. That means the viewer has to watch the pooch go into the Great Beyond again and again and again and again. Hallström does what he can to not make each death an assault on the emotions, using a variety of camera tricks combined with Gad’s calming voiceover to help him do it, but these are still images of sadness involving a cute, cuddly dog, and as such they can feel more than a little assaultive and supercilious just by their very nature.

That’s all that. As far as the overarching story is concerned, as my synopsis should have made clear, this is an episodic tale that plays as a series of shorts. Each reincarnation is attached to its own tale, and while the one concerning young Ethan (who eventually matures into an 18-year-old young man portrayed by K.J. Apa) is the main one all roads emanate from and eventually return to, Hallström and the writers do their best to give each short at least a semblance of complexity and depth. Some are noticeably better than others, the one involving Howell-Baptiste and her romantic insecurities easily the most interesting and thoughtful of the bunch.

As well made and as lovingly shot by cinematographer Terry Stacey (Elvis & Nixon) as all of this might be, I’m still hard-pressed to figure out what the point is. Having not read Cameron’s novel, I can only imagine that it goes even further inside the thought process and mental meanderings of the frequently reincarnated hero. I can also only think that the segments that don’t play particularly well here, most notably the one involving Ortiz’s police officer. Not because the veteran character actor is bad, he’s terrific, but more because it’s impossible to ascertain why anyone would want to watch his segment. It’s like someone inserted some unrelentingly depressing short about how crummy life is and that you shouldn’t fall in love with a single darn thing because it will only be taken away from you, and while I’m certain there’s something commendable about showcasing such doom and gloom, in this instance I’m not sure I, or for that matter the filmmakers, know what that is. 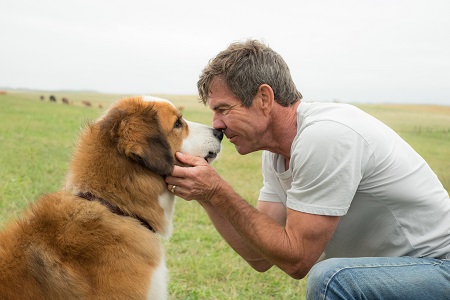 On the flipside, Gad’s voiceover work is surprisingly restrained, never becoming as maudlin or as syrupy as it easily could have been. Additionally, there’s a terrific supporting performance form Britt Robertson, portraying Ethan’s teenage girlfriend Hannah, the young actress conveying oceans of emotional information in a single glance. There is also a beautiful climactic moment between Quaid and his version of the reincarnated animal that brought a smile to my face, leading to a couple of final images that I hit the exact note Hallström was likely going for.

Even so, the just wasn’t my thing. Watching the title character die, come back, die, come back and then die and come back again and again, it’s so blatantly manipulative that no matter how sincere the intentions of the filmmakers might be I just couldn’t deal with it all for the entire length of the film’s two-hour running time. Couple in the bizarrely unpleasant segments where misery rules the day and redemption appears impossible, A Dog’s Purpose left me stuck in emotional quicksand, escaping not so much impossible as it felt like a waste of my time.