Bob Muldoon (Casey Affleck) has broken out of prison. His sweetheart Ruth Guthrie (Rooney Mara) still resides in the same small Texas town in which four years prior the two of them robbed a local bank. He went to jail, extra time added because he took the blame for shooting deputy sheriff Patrick Wheeler (Ben Foster). She’s more or less cleared of all charges even though her involvement is far more heinous then most realize, this treatment in large part due to the intervention of father figure, friend and local criminal ringleader Skerritt (Keith Carradine). He’s good at keeping his hands clean, by all accounts a trusted and valued part of the community, and even though he’s as dirty a player as anyone his words go a long way meaning Ruth comes out of this mess relatively unscathed. 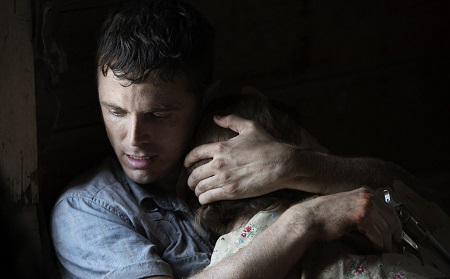 Why has Bob broken out of prison? What’s taking him back to Ruth and his hometown? Will Skerritt allow him to return? And what of Patrick? He’s been looking out for Ruth, keeping track of both her and her four-year-old daughter for reasons he can’t quite comprehend, his attachment to the young woman more intimate, and in many ways life-altering, than he initially realizes. It’s a bit of a mess, and as much as Ruth still loves Bob she’s not sure she wants him back in either her or their child’s lives, the world changing in so many ways since the last time they were together.

For fans of ‘70s style Midwestern criminal noirs like Thieves Like Us, Badlands and McCabe & Mrs. Miller, writer/director David Lowery’s Ain’t Them Bodies Saints is borderline essential. Stripped down, playing in a world Cormac McCarthy or Elmore Leonard would happily call home, the movie is a quietly devastating journey into heartbreak, crime, family and redemption that had me immediately captivated. It is a moody morality play where what goes unsaid is every bit as important, many times more so, as the actual spoken dialogue is.

I could eat films like this up by the gallon. Lowery’s follow-up to his 2009 debut St. Nick following a familiar, well-worn path but doing it with style, vitality, emotion and panache. The director doesn’t spell things out, playing things as close to the vest as possible. He lets events happen naturally, without any extra incentives, everything moving with the simple eloquence of a soft summer’s breeze rustling through the Texas hill country. These are complex, intricately detailed characters, yet ones that also follow extremely familiar archetypes, making them continually fascinating yet also intimately relatable.

It helps that all four of the leads, especially Mara and Foster, are superb, the former delivering her second, award-worthy performance of 2013 (the first coming in Side Effects). She really goes all out, investing so much of herself inside Ruth it’s hard to know where the performance begins and the character ends. She disappears within the woman’s worries, insecurities and desires, her love for her child all-encompassing even though her longing for Bob’s caresses hasn’t subsided one single bit in the four years since the two were separated. 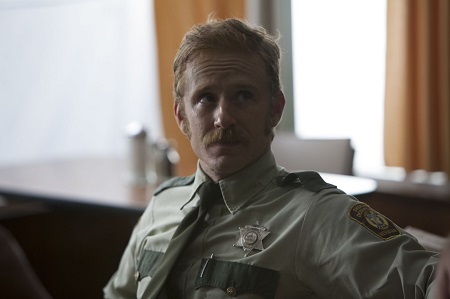 Foster is also excellent, his work as Sheriff Wheeler a lesson in subtle dexterity that defies easy descriptors. He shares a sensational climactic scene with Mara that’s extraordinary, the pair showcasing an uneasy symmetry and a hardscrabble chemistry that ends up bringing forth all the film’s themes and ideas with visceral emotional electricity. Affleck also soars, and even though Bob is without question the most archetypal of all the characters, he manages to imbue him with depths and passions Lowery’s script only hint at.

Then there’s Carradine. His presence almost feels essential, his connection to the material apparent immediately. There’s not a lot on the page as far as Skerritt is concerned, and in many ways we know all we need to about him the moment it is revealed he’s the criminal power working these small town Texas streets. He adds a needed gravitas, and while he knows what is going to happen and why he never once allows that information to cloud his judgment or keep him from doing what he feels is in the best interest of Ruth and her child.

There are a few hiccups. A cadre of heavies show up halfway through and aren’t exactly well developed, while the reasons behind Bob’s escape from prison aren’t exactly shocking. There are some major coincidences at the end which, in some ways, are admittedly silly, a climactic shootout extremely well staged, photographed and choreographed even if in all actuality it doesn’t make much in the way of logical sense.

At the same time, Lowery has done a tremendous job bringing this to life. Bradford Young’s (Pariah) cinematography is top notch, while the editing by Craig McKay (The Silence of the Lambs) and Jane Rizzo (Compliance) has a lyrical quality that’s undeniable. Daniel Hart’s (St. Nick) score is something else, his eerily quiet cadences adding just the right touch, magnifying the mood and the ambiance Lowery is working overtime to create. Ain’t Them Bodies Saints doesn’t rewrite the rule book or transform the genre in any way that’s new or different and that’s okay. When a movie is as close to perfectly constructed as this, when the acting is this universally excellent, not being the most original noir in the backwoods Texas hill country is just fine with me.