There’s a moment in American Assassin that’s perfect. The film’s villain, a renegade former U.S. Navy officer known only by his nickname “Ghost” and portrayed by John Carter and Lone Survivor star Taylor Kitsch, has captured clandestine CIA operative, and his former superior, Stan Hurley and is using every interrogative torture tool at his disposal in order to find out some key information. Hurley is played by Michael Keaton, and what starts out as a somewhat quiet confrontation quickly escalates into something extraordinary. The Academy Award-nominated actor pulls out all the stops, returning to his Night Shift / Beetlejuice / Batman bag of tricks in order to go bug-eyed, unhinged, excitedly angry crazy and it’s absolutely glorious, this five minutes scene breathing life into a movie that, up until then, had found it to be in frustratingly short supply. 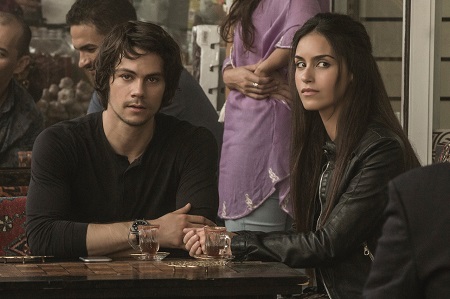 Based on the best-selling book by Vince Flynn, with a script credited to four different writers and direction by Michael Cuesta (Kill the Messenger, 12 and Holding), American Assassin is the story of Mitch Rapp (Dylan O’Brien). A Typical all-American college kid, after a vacation with his girlfriend on the Spanish beaches of Ibiza becomes the site of a deadly terrorist massacre, he spends the next 18 months tracking down the cell of cutthroats responsible for planning and orchestrating the attack. Unbeknownst to him, Rapp has been under surveillance by CIA assistant director of covert operations Irene Kennedy (Sanaa Lathan), and she’s been impressed by what this revenge-seeking youngster has been able to accomplish in so little time.

After scuttling his amateur efforts, she gets permission from CIA Director Stansfield (David Suchet) to send the vigilante to a facility run by the secretive Hurley. Kennedy wants him to train Rapp how to be a spy, believing the kid’s got what it takes to be a top-notch covert operative. But before he can finish training, an international incident involving stolen Russian plutonium has espionage agencies all around the globe on high alert, including those in Iran. When it becomes clear that the infamous Ghost is responsible for all this chaos, Kennedy drops Hurley and Rapp smack-dab in the middle of the carnage, the two men forced to figure out how to work together if they’re going to stop this homegrown terrorist from detonating a nuclear device.

The plot is basically a Jack Ryan thriller that combines facets of Patriot Games, Clear and Present Danger and The Sum of All Fears and crosses them with any of the Jason Bourne films, including the one without Matt Damon The Bourne Legacy, but with the violence amplified to the same level as something like John Wick or Atomic Blonde. All of which would be fine if the film wasn’t so consistently stupid. Rapp is a super spy seemingly overnight. The training sequences are over even before they have a chance to begin. Character complexity is apparently based entirely on just how steely a stare one actor can direct at another. Other than the obvious gut punch of the opening Ibiza massacre, there’s very little that tugs on a single emotional heartstring, and even the introduction of another covert agent named Annika (played exceedingly well by Iranian actress Shiva Negar) with her own reasons for wanting to hunt down Ghost can’t add a single thing substantive to the proceedings.

Cuesta admittedly does his best. His staging of a climactic fight on a runaway speedboat is exemplary, as is a mid-movie assault on the penthouse stronghold of an international arms dealer. I also liked how nasty the movie proved to be, the cutthroat nature of it all impressively surprising. Few thrillers are as willing to kill off characters, including random civilians, as cavalierly as this one does, and in that light it did remind me somewhat of John Frankenheimer’s final classic, the 1998 Robert De Niro barnburner Ronin, a comparison I do not make lightly.

But none of that matters. Rapp is a weak hero, and as much as I’ve liked O’Brien in both Maze Runner adventures, watching him in this is like sitting in an empty room with no windows watching the paint dry while wearing a blindfold. While he looks the part, the performance itself never connects, the fresh-faced rising star delivering a one-dimensional portrait of revenge-fueled determination that’s as obvious as it is tiresome. It does not help that Kitsch, other than in that one scene with Keaton, is an even weaker villain, and if not for his athletic physicality there would be little to nothing imposing about Ghost whatsoever. 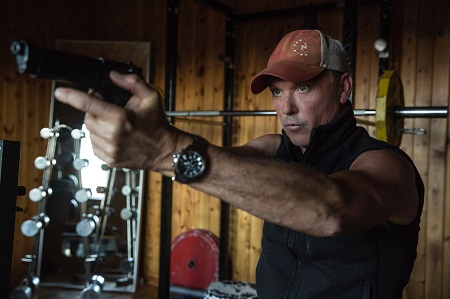 Luckily, what the movie does have is Keaton, and while he’s not asked to do a lot (it’s pretty similar to what Kevin Costner was tasked with doing in 2014’s Jack Ryan: Shadow Recruit), the veteran actor certainly makes the most of every scene he’s involved with. He is an imposing presence, both physically and mentally, making his vicious verbal explosion when Hurley comes face-to-face with Ghost have a weighty impact nothing else inside the film comes close to matching. He elevates the material to a different place each time his character is on the screen, Keaton proving once again just how underappreciated a talent he’s consistently been for going on four decades now.

Which makes it even more of a pity that American Assassin is as forgettable and disposable as it proves to be, the finished film a nondescript action frolic that goes nowhere of any interest no matter how timely certain elements fueling the narrative undeniably are. It’s an exercise in violently boring cinematic extremism, and while the volume of the patriotic rah-rah histrionics might please some, as far as I was concerned the jingoistic stupidity of this particular movie proved to be nothing more than an unremarkable waste of time.