Crack MI6 secret agent Lorraine Broughton (Charlize Theron) has been sent to Berlin ostensibly to collect the body of deceased co-worker James Gasciogne (Sam Hargrave). In reality, she is there to recover a piece of microfilm stolen by a wannabe West German defector given the codename Spyglass (Eddie Marsan). It contains the real identities of British, French, Russian and American spies the world over, giving the holder of this information immense power as the Cold War comes to an end and the espionage playfield transforms into something new.

Lorraine is the best of the best, and if anyone can grab this vital piece of intelligence it is her. Ordered by her superiors, most notably MI6 chief “C” (James Faulkner) and his second-in-command Eric Gray (Toby Jones), to work with embedded East German department head David Percival (James McAvoy) but she’s immediately suspicious of this uncouth slob who appears to be playing his own personal spy game. She’s also being followed by a shadowy French woman (Sofia Boutella) who is obsessed with chronicling her every move, while a seemingly unending series of Russian agents appear to know every step Lorraine is going to take even before she does.

Based on the acclaimed graphic novel The Coldest City written by Antony Johnston and illustrated by Sam Hart and set right before the fall of the Berlin Wall in November of 1989, the Cold War thriller Atomic Blonde is the first solo effort for veteran stuntman and John Wick co-director David Leitch. From an action standpoint, the filmmaker does not disappoint. Starting with a crackerjack escape from a speeding car after Lorraine first steps foot in West Berlin, featuring a pair of wonderful fight sequences and shootouts between the spy and a variety of assailants, the filmmaker shows a magnetic ability to stage adrenaline-fueled pyrotechnics that are downright awe-inspiring. But it is a ten minute, seemingly one-take chase-fight-shoot-escape-fight again set piece beginning inside a high-rise stairwell and culminating in a speeding car that is the true show-stopper, and without a doubt it is one of the best sequences of its type I’ve frankly ever seen.

If only Kurt Johnstad’s (300) rather rote and blasé script rose to the same heights. Having never read Johnston and Hart’s source material, I have no idea if the central flaws here appeared there as well. What I will say is that calling this scenario John le Carré-light would be doing the masterful The Spy Who Came in from the Cold and The Russia House author a massive disservice. The mystery at the heart of this particular story is obnoxiously complex and even more annoyingly obvious, everything building to a pair of climactic reveals that are frankly ponderous. For a film that purports to be so sharp and intelligent, there’s honestly precious little to challenge the intellect, and by the time the final bit of masquerade and concealment is done with I let out a quiet, indifferently bemused sigh in reaction to where things ultimately ended up.

Even so, when it’s clicking Atomic Blonde is kind of a magnetic blast. Theron was born to play a character like Lorraine Broughton, bringing a level of gravitas, acumen and charisma to the veteran spy that’s only made more impressive thanks to her lethally authentic physical abilities. More importantly, the Oscar-winning actress never loses an ounce of all the varying internal dynamics that make this woman who she is, her femininity, her sexuality, her confidence, her refusal to abide by societal norms, all of it comes together in a fascinating, deeply invigorating fashion that’s continually astonishing. This is a performance that’s right up there with Theron’s work in Monster, Mad Max: Fury Road, North Country and Young Adult, watching her here a rollicking, free-wheeling, ultra-violent joy that never grows tiresome even if the film itself sometimes does.

As to that amazing action sequence near the end of the film, it’s glorious. Leitch orchestrates things as if he were the love child of John Woo and Gene Kelly, the aggressively pugnacious viciousness of the entire scene only made more incredible because of its balletic grace. Choreographed to feel utterly realistic, culminating with all involved physically exhausted to the point of near incapacitation, the director, along with cinematographer Jonathan Sela (Transformers: The Last Knight), manufactures the type of massive, instantly classic set piece the type of which we’ll be talking about for some time to come. It’s worth the price of a matinee ticket all by itself, coming incredibly close to making the movie essential all on its lonesome. 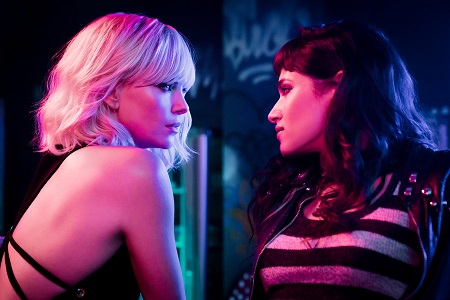 But that script, while not terrible, just isn’t anywhere near as interesting as I kept hoping it would be. John Goodman, Bill Skarsgård and Til Schweiger are all more or less wasted in nothing roles that, save for that first member of the trio, end up going pretty much nowhere interesting. As for Jones, Marsan and Faulkner, none are utilized anywhere near to their potential, each wearing the shoes of moderately forgettable characters each could portray in their sleep. Only McAvoy and Boutella make lasting impressions, the former because of his unhinged, over-the-top unconstrained cartoonishness and the latter for a haunting trepidation I personally found captivating.

Still, I want people to see Atomic Blonde. Theron is wonderful and Leitch proves he’s got impressive directorial chops. As dopey as the central mystery at the heart of this Cold War spy-versus-spy tale might be, I was never bored for a single second as I watched things play themselves. More importantly, the action sequences achieve a magical eloquence that had me grinning ear-to-ear in perpetual glee. While the movie never lives up to its potential, it’s still a heck of a lot of fun to watch nonetheless, and if Theron had the desire to bring Lorraine back to the screen for a second adventure I guarantee I’d be first in line to find out what it is she might be up to next.