“We’re not gonna see anything bigger than a chipmunk…” 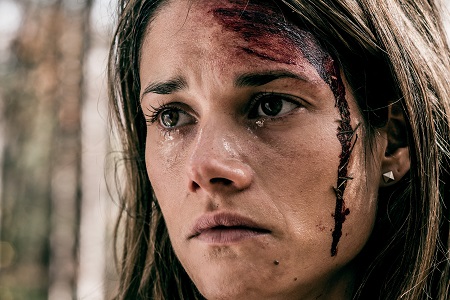 “Corporate lawyer Jenn (Missy Peregrym) is not a fan of the outdoors. But when her longtime boyfriend Alex (Jeff Roop) insists they go camping, hiking his favorite trail deep within the secluded confines of the stark Canadian wilderness, she can’t really come up with a reason to decline, and as such heads off into the unknown apprehensive yet also marginally excited about what the weekend might have in store.

That’s really all there is as far as the basics driving writer/director Adam MacDonald’s stripped-down, existential deep woods thriller Backcountry is concerned, and in all honesty I can’t say there’s anything more a viewer needs to know before stepping into the theatre. Let’s just say that, in his zest, in his zeal, Alex makes a critical error and inadvertently leads the two of them off of the trail and into an area of the forest he’s never been before. In the attempt to get back on track and return to where they started the pair happen to stumble into the path of an extremely hungry Black Bear and a desperate fight for survival ensues.

A veteran character actor who has appeared in everything from the low budget indie horror-thriller Wolves, to the long-running television show ‘Rookie Blue,’ MacDonald makes the leap to directing but he does so in somewhat surprising, stripped-down fashion. What could have been some sort of adrenalized cross between the Anthony Hopkins-Alec Baldwin survival yarn The Edge and last year’s Academy Award-nominated female-driven isolationist saga Wild ultimately proves to be anything but. Keeping the focus on the characters, making sure Jenn is front and center at all times as her evolution is key to the film’s ultimate failure or success, MacDonald shows a delicate touch that’s surprising, proving to be in no hurry to get to the horror that must inescapably come.

This proves to be a good thing. Much like Bobcat Goldthwait’s found footage Big Foot opus Willow Creek, MacDonald is unafraid of the slow burn, allowing Jenn and Alex’s relationship to matter so when chaos strikes there is a weighty emotional investment in the both of them making the question as to whether or not one or both of them will survive mean more than it would have otherwise. He takes side trips, like an early sojourn into the company of guide, survivalist and all-around cad Brad (Eric Balfour), letting the fangs of jealousy sink their teeth into the central duo’s flesh in a fashion that is both amusing and unsettling. More than that, MacDonald allows these characters to have a sense of humor, to understand hardship and levity can oftentimes go hand-in-hand, so when Alex’s ego ends up getting the better of him these moments bristle with an absurdist authenticity that’s endearing.

Only then, after I’d gotten to know Jenn so well, felt embarrassed for Alex as he mucked things up in a way that, almost inadvertently, solidified his love for his girlfriend even more, does the bear enter the picture and, when it happens, all bets are instantaneously off. Things go from reserved, borderline playful, to carnivorously lethal in the manner of seconds, MacDonald staging the initial attack with a ferocious malevolence that had me staring at the screen in openmouthed dread.

It’s a shame more people won’t see this film, that they’ll immediately dismiss it as some B-grade horror enterprise when in reality it’s anything but, more so because they won’t get the chance to experience the full breadth, power and tenacity of Peregrym’s performance. She’s every bit as stupendous as Mia Wasikowska was in Tracks, equal to all that Reese Witherspoon achieved with her Oscar-nominated turn in Wild, the actress delivering such a complicated, full-bodied portrait of a woman in constant emotional flux trapped in nature’s awesome expanse the overall effect is startling. 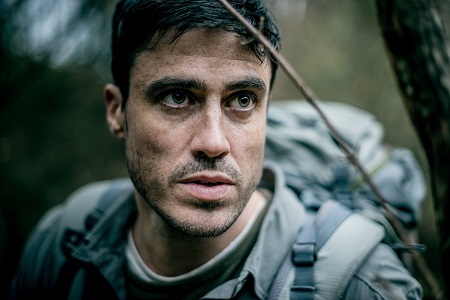 MacDonald doesn’t break convention. The movie hardly ends up doing anything I didn’t see coming. It just does all it sets out to do very, very well, never taking the audience or their intelligence for granted as it does so. Additionally, it is strikingly well shot by Christian Bielz, his use of close-ups adding a level of familiarity that grabbed me by throat and refused to let go. Best of all is the startling, effectively disquieting score by Frères Lumières, and much like It Follows and Ex Machina the group’s music augments the onscreen action so perfectly it’s impossible to imagine what the film would have been like without it. Backcountry devours terror, chews it up and spits it back out at the audience as if it were a gourmet meal, all of which makes it a dinner I can’t wait to partake from again.”

Backcountry is growing on me to the point I find myself feeling it’s one of 2015’s most unheralded gems. It’s mesmerizing and unsettling, both in equal measure, slowly building tension and suspense until terror is the only logical outcome for everything that has meticulously transpired. Additionally, it is anchored by a performance from Peregrym that’s easily one of the best I’ve seen all year, and while it’s doubtful she’ll garner anything even close to resembling award’s consideration that doesn’t make what she does as Jenn any less magnificent. 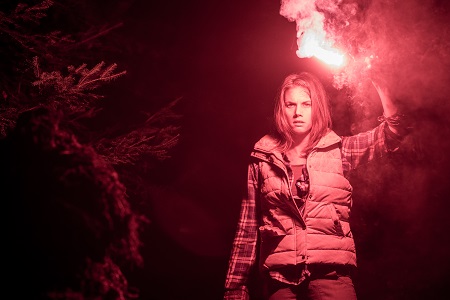 Audio Commentary with director Adam MacDonald and actors Jeff Roop and Missy Peregrym – Excellent, congenial commentary track with all three of the film’s principal players engaging in a lot of friendly banter while also offering up lots of interesting facts regarding the difficulties in bringing things to life. The stuff involving the on-set antics of the bear and how close both actors were to the animal is particularly interesting.

Behind the Scenes (17:25) – A nice, somewhat extended EPK-style piece filled with solid cast and crew interviews offering up tons of solid insight into the film’s creation.

Bear Shots (2:01) – When bear wranglers ask for a sequence or a series of notes and/or images detailing what you are going to want their animal to be doing over the course of a film, here’s hoping you’ll have the same ingenuity to send over something equally imaginative as director Adam MacDonald did when he was given this task during preproduction work on Backcountry.

Backcountry just gets better and better with each viewing, the film a shockingly terrific thriller that has burrowed its way under my skin quite nicely at this point. Scream! Factory’s presentation of this IFC Midnight release is topnotch, and as such is a disc I happily and heartily recommends fans of the picture snatch up as soon as they can.