On the border of California and Nevada sits the El Royale, a rundown hotel where guests can choose to stay in whichever state that suits their sensibilities. On a cold January night in 1969 a group of disparate characters find themselves at this perpetually empty locale. There’s the cocksure vacuum salesman Laramie Seymour Sullivan (Jon Hamm), eager to use his expense account to stay in the swanky bridal suite on the California side of the hotel. Also there is the friendly Father Daniel Flynn (Jeff Bridges), interested in staying in the Nevada section but unable to choose which cabin, four or five, that he would prefer. Also joining him in the Battle Born State are the quiet R&B singer Darlene Sweet (Cynthia Erivo) as well as an angrily aggressive woman (Dakota Johnson) who refuses to write her name in the registry. All together it’s the largest group of customers hotel clerk Miles Miller (Lewis Pullman) has seen in quite some time, and to say they have him jittery would be understating the obvious. 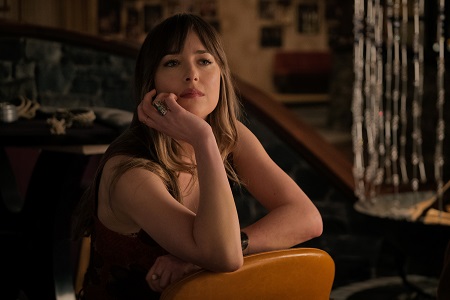 Nothing is what it seems. Father Daniel wants to find a specific room for a reason. Laramie Seymour Sullivan’s gigantic vacuum case doesn’t actually contain a display model but only the facsimile of one. The nameless visitor has another, slightly younger woman she keeps referring to as “Ruth” (Cailee Spaeny) tied to a chair in her room. As for Darlene, she’s really the only one content to be who she actually is, transforming her own room into a makeshift studio in order to practice for an upcoming show in Reno. But even she has a secret hiding in her past, one that she’s worried if anyone were to find out about she’d potentially never work as a singer ever again.

This is only the tip of the iceberg as far as the convoluted pulp fiction noir aesthetics of writer/director Drew Goddard’s Bad Times at the El Royale are concerned. A follow-up to The Martian and Cloverfield screenwriter’s 2012 directorial debut The Cabin in the Woods, this change of pace effort is a convoluted tale of moral and societal degradation only told at epic length yet still primarily set inside one isolated central locale. It is a treatise on what people are willing to do to survive, what they will give up to get ahead and the sacrifices they will make in order to do the right thing. It is a story of forgiveness and faith, of resilience and honesty. Most of all it is just a giant mélange of human wreckage attempting to either repair itself or tear additional limbs off of an already mutilated torso, the physical and psychological scars of violence begetting more of the same as events spiral out of control.

It’s a cruel movie. There’s no denying that. Goddard takes no prisoners, and just as soon as I was starting to become curious about a character or wonder what it was they were going to try and do next suddenly they would be dispatched with a cold, almost callous indifference that left me gasping for air. Just as suddenly the director would circle around and view important events from an entirely different point of view. Almost as quickly he would do so again, in a way crafting a circular Rashomon where the truth of a situation can only be surmised after viewing every angle of the event in as meticulous a fashion as possible. It’s masterfully executed, Goddard handling it all with an assured confidence that’s astonishing.

But this also means the story can be painfully drawn out. It takes time to look at so many various events from multiple points of view, even more so when the director allows each scene to move at its own individualistic pace. Goddard and cinematographer Seamus McGarvey (Anna Karenina, Atonement) stage a plethora of exquisitely intimate tracking shots that, as masterful as they might be, also call attention to themselves for their inherent theatricality. It’s a double-edged sword, this technical virtuosity also stalling out the narrative on more than one occasion.

Yet, when Bad Times at the El Royale is glorious it is magnificently so. The story weaves in and out in ways that combine the best of Quentin Tarantino, Samuel Fuller, Robert Altman, Dashiell Hammett, Mickey Spillane and Raymond Chandler with absurdist aplomb. Better, Goddard allows his talented cast the freedom to explore their characters in any number of wildly eccentric and morally complicated ways. As such, by the time the survivors make it to the final act, even if they were beyond salvation I still found myself caring about whether they would live or die, the emotional investment I felt as the story went down the home stretch well beyond my initial expectations.

Bridges is his superlative self, allowing the secrets Father Flynn is trying to hide to rise to the surface with an intuitive mutability that suits his character perfectly. Erivo is even better. Her Darlene is a determinedly soulful iconoclast who is filled with far more inner strength, and even more innate goodness, then she realizes. The way the singer responds to Father Flynn’s truths when they are revealed to her captured my attentions in their entirety, Erivo giving these moments an arresting authenticity that knocked me cold. Johnson is also wonderful, but the less said about her mysterious character the better, while Pullman is close to spectacular as Miller searches for salvation and absolution while at the same time trying to put his actions on the ground in Vietnam far behind him as he does so.

Then there is Chris Hemsworth. He’s playing a charismatic California cult leader known as Billy Lee, and while Goddard shows glimpses of him throughout the first two-thirds, one can’t help but wait in constant anticipation eager for this man to arrive at the El Royale and become an actual physical presence inside the story. When he finally does materialize it proves to have been well worth the wait. Hemsworth saunters and slinks his way into the center of the frame, his masculine gravitas oozing a type of dangerous magnetism that I couldn’t ignore. He takes over so completely he almost cripples the film as it’s hard to maintain interest in anyone else whenever he’s on the screen. And yet, Billy Lee is just another piece of the puzzle, and when things finally explode seeing the carnage he’s left in his wake one of the major points of emphasis Goddard has been so carefully building towards. 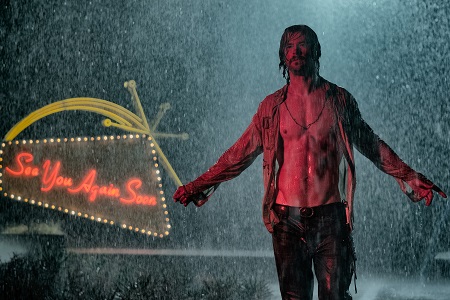 I’m admittedly being vague about a lot of this on purpose. I don’t want to talk about the secrets of the hotel or the things that have made Miller such a shell of a person. I’m not speaking about the marvelous prologue that sets the template for much of what is to follow, and I’m not about to reveal who Johnson’s character is and why Ruth means so much to her. Goddard has a lot going on and for the most part he’s able to keep all of these varying dramatic balls in the air successfully, rarely losing sight of where he wants to go while at the same time serving up an engaging and entertaining story audiences will hopefully thrill over.

If they will or not I have no idea. The marketing for the film has sold Goddard’s opus as some sort of lean, mean noir-drenched suspense flick filled with pulpy mayhem and bloody chaos, and while those last two items certainly exist, they do so in the context of a character-driven opus unafraid to take its time and develop things slowly. For my part, I really enjoyed Bad Times at the El Royale even when I got angry at it for callously killing off a character or two that I’d started to have affection for. But this is still a nifty little ultraviolent throwback I’m eager for audiences to get a look at, their various reactions, whether they be positive, negative or somewhere in-between, certain to provoke wildly divergent discussions worthy of further conversation.