I never watched “Baywatch,” the long-running syndicated television show that proved to be star David Hasselhoff’s crowning achievement and made Pamela Anderson a worldwide sensation. I’m pretty certain I’ve never seen a single solitary episode, and other than those famous slow-motion shots of the cast running along sandy beaches there’s precious little I can tell you about the program, its characters or why it became such a phenomenon. 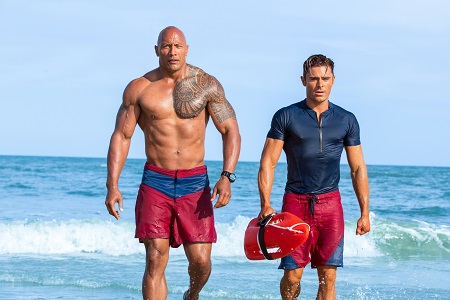 Even so, I was willing to give director Seth Gordon’s (Horrible Bosses) movie version of Baywatch the benefit of the doubt. The reasons? For one thing, there’s the little matter of a comedic sensation from 2012 entitled 21 Jump Street, a feat of hilarity, imagination, intelligence and flat-out fun that took just about everyone, everywhere by surprise. Additionally, I honestly just liked the idea of superstars Dwayne Johnson and Zac Efron teaming up inside a movie like this. Both have shown a knack for this sort of funny business under the right circumstances, and if the tone was right, the direction consistent and the script in decent enough shape, it was easy to think this could potentially be something worthy of a look just for them alone.

And, for almost the entire length of the opening act, that’s exactly what this new interpretation of Baywatch proves to be. It introduces a fun collection of characters portrayed by the likes of Johnson, Efron, Alexandra Daddario, Kelly Rohrbach, Ilfenesh Hadera, Jon Bass and Yahya Abdul-Mateen II, the byplay between them all sharp and winning, and the mixture of vulgarity to sincerity to absurdism is reasonably well balanced. I sincerely liked what this movie was up to and was genuinely interested to discover what would happen next, the potential of this opening section enough to raise my excitement level considerably.

I wish that wouldn’t have been the case, because once the actual plot kicks in, once the pieces are put in place for the madness and mayhem to begin, Gordon’s latest proves to be a massive waste of time. Had it just been terrible from the jump, had I not liked it from the very first frame, I seriously doubt I’d be annoyed as I am. After all, a harmless bad movie is still nothing more than a harmless bad movie, thus forgetting about it afterwards is a remarkably easy thing to do.

But a relatively harmless bad movie that has the temerity to pretend to be a good one? That sting lingers, and Baywatch has just enough going for it to make its ultimate failure feel like a botched attempt at C.P.R. Coming from a plethora of writers, including screenwriters Damian Shannon and Mark Swift, the two minds behind Freddy vs. Jason and the 2009 reboot of Friday the 13th, this film has no idea what it is, the tone it would like to strike or who it has even been made for. It offers up one of the worst screen comedy villains in the form of land usurper and malevolent developer Victoria Leeds (Priyanka Chopra) in recent memory, while the partnership between Baywatch veteran Lt. Mitch Buchannon (Johnson) and self-centered rookie (and two-time Olympic Gold Medalist) Matt Brody (Efron) begins promisingly enough only to go nowhere worthwhile.

The story revolves around Buchannon’s belief that someone is out to destroy the Bay by turning it into an exclusive, upscale locale only the super rich can afford to visit, and they’re doing it by decreasing land values via the import of a lethal narcotic as well as by paying off the entire city council to go along with their nefarious plans. While his team of driven lifeguards, stoic second-in-command Stephanie Holden (Hadera), bubbly do-gooder CJ Parker (Rohrbach) and trainees Summer Quinn (Daddario) and Ronnie Greenbaum (Bass), are all ready to assist in whatever plan their leader might use to uncover the truth, newcomer Brody thinks this is a job for the police and not a cadre of exceedingly fit swimmers in tiny red swimsuits.

Chopra, apparently a sensation on the television series “Quantico,” is moderately terrible as the villainous Leeds. Other than a clever early scene where her character encounters Buchannon on the beach, getting out of her car to stand on a little pink stepping stool so she doesn’t get her designer heels dirty, she just doesn’t manage to generate any charisma. It’s almost as if she decided to show up, pick up her paycheck and then head back home, and while everyone else in the cast seems to be having a grand time going a little crazy, Chopra looks as if she’d rather be doing anything else other than acting inside this movie. 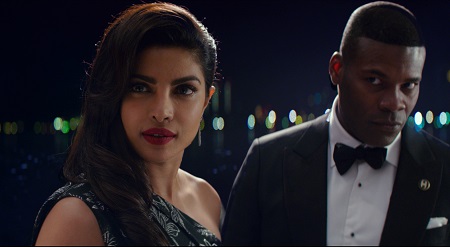 Not that I’m sure any of that is wholly her fault. Gordon’s direction is haphazard to say the least, going for broad comedy one moment, straightforward action-comedy at another, vulgar comedy a few beats after that and total The Naked Gun style joke-a-second parody comedy right after that. He plays up the buddy cop dynamics between Buchannon and Brody only to drop those concepts and tendencies in short order, while the influx of sexual comedy into the proceedings is tiredly rote to the point it’s more embarrassing than it is amusing.

Still, Johnson and Efron give it their all, while Daddario proves to be far more adept at this sort of thing than appearances in San Andreas, Texas Chainsaw and Burying the Ex had led me to believe. I also really did dig that opening section, while a running gag involving Buchannon’s refusal to call Brody by his name and instead choosing to refer to him via a variety of Boy Band monikers (like NSYNC and the Backstreet Boys) is continually amusing. There’s also some decent stuff that happens between Rohrbach and Bass, especially early on, the payoff to their continuous byplay a bit more innocent and sweet than I was anticipating.

Not that it matters. Nothing holds together, the shifts in tone so wildly slapdash it’s as if the entire production team, Gordon included, were making it all up via improvisation from the instant the shoot began. The movie even wastes its cameo appearances by the show’s signature stars, Hasselhoff and Anderson, the jokes involving them so benign it’s a wonder why either of them decided it would be anything close to fun to be even a small part of this imbecilic mayhem. Baywatch treads water for two-thirds of its unwieldy 116 minutes, maybe even more than that, the comedy drowning in its own mediocrity and as such is undeserving of mouth-to-mouth resuscitation.