Beauty and the Beast Sings Back into Theatres

It’s been two decades since Disney’s Beauty and the Beast became the first animated film to be nominated for the Academy Award for Best Picture, a feat only equaled by Up and Toy Story 3, and a strong case can be made the only reason they found themselves up for Oscar’s top prize was due to the expansion of the nominee list from five to ten. While The Silence of the Lambs went on to be the big winner that year, many consider this adaptation of the timeless Jeanne-Marie Leprince de Beaumont tale to be an even more magnificent achievement, and while comparing the two is impossible I’m hard-pressed to disagree with anyone who might believe that to be true. 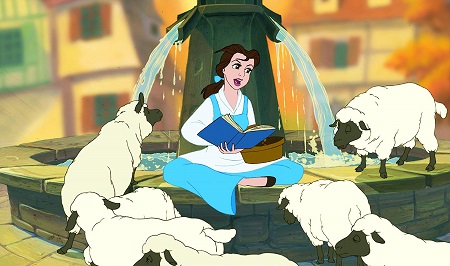 I’m not entirely sure a 3-D Beauty and the Beast was entirely necessary. I also felt the same way about the theatrical re-release of The Lion King last September so this shouldn’t come as a shock to anyone who reads my reviews on a regular basis. But what will likely be even less of one is my enthusiasm as it pertains to this re-release. Make no bones about it, of the animated films crafted and released by Disney post-1980 (heck, probably post-1960), this is my favorite, and the opportunity for a new generation of audiences to experience it in a theatre is one that should not be missed.

The film hasn’t lost an ounce of its charm. Disney’s Blu-ray release last February was cause for celebration in and of itself, but seeing it again for the first time in a theatre, for the first time since high school, was something else entirely. The textures, the colors, the music, all of it swirled around me again as if it were the very first time I’d seen the picture, and I was reminded once again just how timeless and brilliant this adaptation truly is.

It begins with the writing. While the script is credited to a number of writers (as are a number of Disney animated classics, so that’s not necessarily a bad thing), the literate nature of the plot mechanics and the dialogue is nothing short of extraordinary. While following the template of the de Beaumont fairy tale, the film still manages to tread down its own distinctive path. Additionally, while countless subsequent animated spectaculars have liberally borrowed from this Disney effort it still remains an unmatched classic every similar piece of family-friendly entertainment will be judged against for generations to come.

There’s also the music, Alan Menken and Howard Ashman’s iconic score and songs so perfectly realized I can’t begin to imagine the film without them. One part Gilbert and Sullivan, another Rodgers and Hammerstein, from the opening arias to the climactic title track all of it works splendidly. It’s one of the all-time great musical songbooks, and there were moments I found myself happily singing along with the film without even realizing I was doing so. 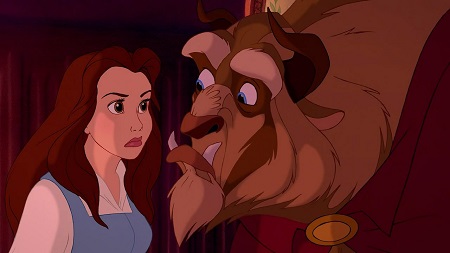 But who am I kidding? It’s all magnificent. I’ve always adored the lush, sometimes gothic nature of the animation as well as how the movie pays such subtle homage to Jean Cocteau’s 1946 black and white masterpiece. Directors Gary Trousdale and Kirk Wise do a magnificent job of keeping things focused, of maintaining a central point of view. They build the drama with precision, and those who don’t find themselves tearing up during the magnificently beautiful finale might need to go to the doctor and verify their heart is actually beating.

The movie doesn’t need to be in 3-D, and I can’t say the process adds or subtracts anything one way or the other. But the bottom line is that Beauty and the Beast, as good as it looks on Blu-ray, as superbly as it plays at home, deserves to be seen in a movie theatre. Like all Disney animated classics, from Snow White and the Seven Dwarves to Sleeping Beauty to The Jungle Book to The Little Mermaid to The Lion King, this one should be showcased in a darkened auditorium to an awestruck audience filled with young and old alike on a more regular basis. To say I’m happy it’s getting such a showcase would be an obvious understatement. To say I’m going to be heading back to the theatre to see it again before its limited run comes to an end would be an even bigger one.