Disney has had a pretty good run of late taking their animated classics and transforming them into live action box office smashes. Last year both Pete’s Dragon and The Jungle Book, the latter winning the Academy Award for Best Visual Effects, sold a high volume of tickets and set critical hearts aflutter. In 2015, Cinderella was a massive success, earning an Oscar nomination for its rich, luxuriously imaginative costumes, rave reviews and over $540-million at the global turnstiles. Then there is 2010’s Alice in Wonderland, and while critics were hardly kind to Tim Burton’s take on the Lewis Carroll literary classic, that didn’t stop the 3-D spectacular from earning over a billion dollars worldwide. 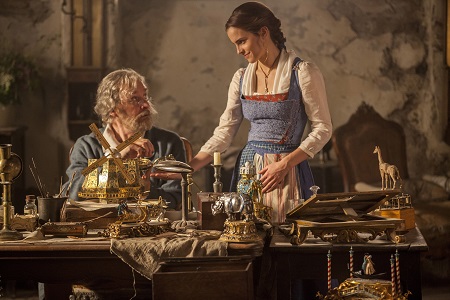 The one thing all of them have in common is that they all aspired to be more than just scene-for-scene retreads of their animated (or, in the case of Pete’s Dragon, live action-animated hybrid) namesakes. While some of these have been more successful at doing this than others, all of them still made a clear case for their existence outside of their predecessors, and as a result audiences have warmly and enthusiastically responded to them all. As business models go, for Disney this has been unquestionably a good one, the fact they’ve at least made something of an effort to allow their filmmakers the freedom to make each story their own an additional positive worthy of appreciation.

All of which makes director Bill Condon’s (Gods and Monsters, Mr. Holmes) takes on the studio’s 1991 animated classic Beauty and the Beast monstrously perplexing. While that Best Picture nominee, the first ever animated feature to be so honored and the only one to do it when there were only five contenders, obviously owed a huge debt to Jean Cocteau’s landmark 1946 adaptation of the classic Jeanne-Marie Leprince de Beaumont fairy tale, thanks to lush characterizations, superb animation, brilliant set pieces and a marvelous soundtrack it instantaneously entered the pantheon of all-time great Disney classics. It transcended the art form and showed that the studio was ready to charge into a new era of storytelling, offering up a heroine who was strong, smart and willing to forge her own way into the world without the aid of a man.

Condon’s film, save for a handful of new songs and one key moment near the end that grants a heartsick Beast (Dan Stevens) a moment to individually shine, essentially duplicates the animated film in the same way Gus Van Sant’s 1998 version of Psycho was a shot-for-shot remake of Alfred Hitchcock’s 1960 horror classic. The best moments, the ones that jump off the screen and force the viewer to sit up straight in their seat and revel in their awe-inspiring glory, are direct pulls from the 1991 Academy Award-nominee, straight-up reenactments that are, if not duplicated exactly, close enough so to feel like they are. As such, the movie never takes on a life of its own, it’s pulse stranded at middling for almost the entirety of its obscene 129-minute running time, all of which makes the watching of it far more of a frustrating chore than it by any and all rights should have been.

The story remains the same. After her eccentric father Maurice (Kevin Kline) goes missing in the woods, headstrong Belle (Emma Watson) heads out into the unknown to find him, discovering the hiding place of the palace of the monstrous Beast. Giving her word to remain with the creature as his guest if he lets her father go, the pair slowly get to know one another, the enchanted knickknacks and objects, led by the gentlemanly candlestick Lumière (Ewan McGregor), the authoritative clock Cogsworth (Ian McKellen) and the kindly tea kettle Mrs. Potts (Emma Thompson), going out of their way to lend support to this blossoming friendship. Meanwhile, back in town, the pompous and self-possessed Gaston (Luke Evans) conspires to figure out a way to make Belle his bride, his sniveling compatriot LeFou (Josh Gad) inadvertently fanning the brute’s ego with every word he says in support. 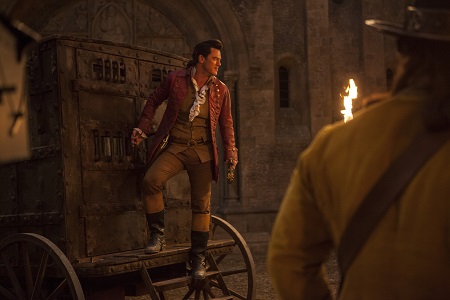 All of composer Alan Menken (Tangled) and the late lyricist Howard Ashman’s (The Little Mermaid) songs are here, including the Oscar-winning title track, while the composer teams up with frequent collaborator Tim Rice (Aladdin) for a handful of new ones that help pad out the film’s running time. The best moment in the entire motion picture is a spectacular reenactment of the “Be Our Guest” number, McGregor throwing himself into the performance with wild, giddy abandon, while Condon’s orchestrates some Busby Berkeley-like visuals that are beyond fantastic. It was the only time in the movie where I sat up in my seat and peered at the screen in childlike awe, the filmmaker both capturing the spirit of the animated original while also making a signature mark upon the material that is winningly his own.

In regards to positives, that’s the best I’ve got. Featuring inconsistent visual effects and spotty motion capture work that goes from being brilliant (all of the stuff with Cogsworth, Lumière, Mrs. Potts and the majority of the animate inanimate objects is exemplary), to good (the Beast’s icy battle with the wolves is wonderful, as are any of the moments where he and Belle try and slurp soup together), to borderline terrible (the film’s signature sequence, the dance between Beast and Belle in the grand ballroom, is awful, looking like a cut scene from a subpar, under-produced video game), not all of the film’s guestimated $200-million or so budget appearing to have made its way up onto the screen. There is an unnerving artificiality that never allows this fantasy fairy tale world to come to life, a mechanically lifeless sheen smothering things, all of which continually kept me at arm’s length.

But that’s not the worst of it. As nice as Watson is as Belle, as much effort as Stevens puts into his performance as the Beast, there just isn’t any emotion traveling between the two of them, their blossoming love never coming to life in the same way it does in the best adaptations of the De Beaumont story. There just isn’t any heart, no soul, Condon so busy trying to manufacture the world the two live within he for some reason forgets to give the audience a reason to care about whether or not they end up living happily ever after. Screenwriters Stephen Chbosky (The Perks of Being a Wallflower) and Evan Spiliotopoulos (The Huntsman: Winter’s War) struggle to do anything other than copy almost word-for-word what had been done before, and other than a slight tweak here and there the screenplay oftentimes comes across as an almost exact facsimile of its far superior 1991 predecessor. 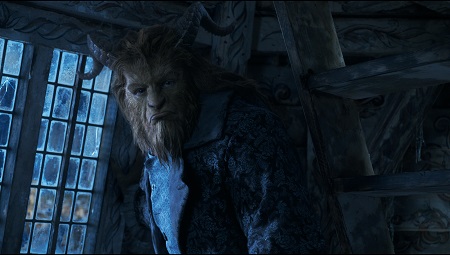 It isn’t a total loss. Evans is magnificent as the villain Gaston, his scene-stealing turn a resplendently haughty bit of cinematic excess that had me grinning ear-to-ear every time he appeared on-screen. Stevens also is very good, nailing his early scenes with a morosely downtrodden belligerence that’s agreeably unsettling, while his delivery of a new song, the poignantly tragic “Evermore,” is sensational. There are also some nice character beats from Kline, McKellen, McGregor and Thompson, each having a moment to make their mark, doing it with feisty brio.

Even so, I can’t bring myself to get all that excited about watching this version of Beauty and the Beast a second time anytime soon. While an almost certain Academy Award contender for Sarah Greenwood’s (Anna Karenina) production design and Jacqueline Durran’s (Mr. Turner) costumes, from an emotional standpoint this Disney effort is about as lively as a roomful of catatonic narcoleptics high on sleeping pills. Condon’s adaptation does nothing to justify its existence, and while this tale might still be as old as time, the song it sings sadly no longer rhymes, making its tune nothing short of a bittersweet, tone-deaf disappointment not worth listening to.