Love it, hate it, revel in its minutia or find one’s self unable to understand every idea, facet, theme and concept director and co-writer Alejandro González Iñárritu (Babel, 21 Grams) is exploring, there’s no denying the two-time Oscar nominee’s Birdman is impossible to take your eyes off of. From the opening image of a meteor careening across the sky, to its final moments when an actor combines insanity and inspiration into some form of creative euphoria, the movie is a vital, rhythmically alive character study looking at creation in all its complexity. Make no mistake; this is a movie to treasure.

A quarter century ago Hollywood superstar Riggan Thomson (Michael Keaton) was on top of the world. He’d played superhero icon Birdman in three massive box office hits, the international public eager for him to keep wearing the cape and to continue taking to the skies in order to save the world from threats of all kinds. But he’d had enough, and with more money than he knew what to do with, a failing marriage to the lovely Sylvia (Amy Ryan), and a daughter he hardly took the time to know, let alone be a father to, it was time for him to return to his roots and be the kind of serious actor he always wanted to be.

Fast-forward to the present and Riggan, along with his trusted lawyer and friend Jake (Zach Galifianakis), is self-financing a Broadway theatrical production of Raymond Carver’s short story What We Talk About When We Talk About Love, one that he wrote, directed and is staging in the historic St. James Theatre, no less. His daughter Sam (Emma Stone), fresh out of rehab, is working as his personal assistant, while his latest romantic conquest, Laura (Andrea Riseborough), who may be pregnant, has a co-starring role. After an on-set accident takes out the secondary male lead, the other female star Lesley (Naomi Watts) surprises everyone by stating that her volatile boyfriend, a darling of the Broadway critical set, Mike Shiner (Edward Norton) is available and interested in the part. 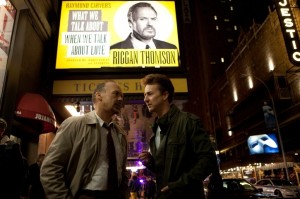 Even though the film takes place over a series of days – Riggan’s play is in the middle of previews preparing for its big opening night reveal – Iñárritu presents events as if they were all one seamless take with no cuts, no edits and no place to ascertain where the action shifts from one moment to another hours later. It’s as if the whole thing is one Virginia Woolf-like stream of narrative consciousness, like these interactions between one character to another are happening as if sprung forth like zygotes blossoming into full-fledged multi-cell organisms. Mixing the rat-a-tat-tat rhythms of a Robert Altman-like black comedy with the hard-boiled raw vulnerability of Carver’s stories, the filmmaker doesn’t let up, doesn’t give in and doesn’t pull any punches, the resulting mélange a cavalcade of Hollywood tropes and clichés that feel captivating and animated in ways they potentially never have before.

That’s the crazy thing. In all honesty, as far as the core story elements are concerned, there’s nothing new here, nothing at all, much of what Riggan is dealing with ideas playwrights have been waxing poetic about for centuries. More than that, movies have always loved stories about their own, about actors, about how difficult it is to create art and how critics critique because they themselves are incapable of birthing artistic achievements. We’ve watched everyone from Bette Davis to Kirk Douglas to Ginger Rogers to Dustin Hoffman to Tim Robbins to Julia Roberts to Jean-Claude Van Damme to countless others go through these paces time and time again, some obviously meeting with more success than others, but I think you’re getting the idea.

Yet what Iñárritu and his fellow screenwriters do is explosive. Much like what Richard Linklater did with Boyhood, the director expands on an overly familiar, maybe even tired conversation in ways that are unconventional and thought-provoking. He flips the script, building three-dimensional characters out of stereotypes giving them unexpected breadth and scope that is continually fascinating. Every word, every syllable, every verbal nuance, all of it is important, the spell being crafted as imaginative and as daring as it is mesmeric.

The actors are universally excellent, Stone, Norton, Watts and, somewhat shockingly, Galifianakis particularly so, each delivering award-worthy turns deserving of recognition. Be that as it may, this movie doesn’t likely exist without Keaton, and it’s hard to imagine any actor in all of 2014 being as perfectly cast in a particularly role as he is in regards to Riggan. The baggage he comes in with is obvious. For a large chunk of the movie going populace he’s still the Caped Crusader no matter what Christopher Nolan and Christian Bale might have to say, and as such it makes perfect sense that Iñárritu turned to Keaton when looking for someone to give his figurehead life. 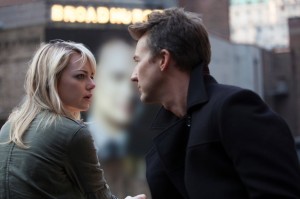 But Keaton doesn’t rest on that history. This is a daring, no-holds-barred performance, one free of vanity and as such is as naked and as raw as they come. He walks a fine line throughout, never going so far over the top to make Riggan unbelievable yet in the same moment still remaining so larger than life the themes Iñárritu and company are speaking towards remain front and center with nary a distraction. It’s a multifaceted portrait of creation and hubris run amok, ego and self-doubt colliding one into another as if each were cannon balls intent on ferociously ramming with their duplicitous doppelgängers. In many ways this is the performance of the year, at the very least of Keaton’s career, and if Oscar doesn’t come calling I’ll be shocked in more ways than I can honestly say.

The technical aspects speak for themselves, Emmanuel Lubezki’s (Gravity) bravura cinematography intimately mixing with Douglas Crise (Spring Breakers) and Stephen Mirrione’s (Traffic) crackerjack editing so flawlessly it’s impossible to know where one facet of this visual feast begins and the other ends. Throw in Antonio Sanchez’s jazzy, percussion-heavy score (echoes of vintage Quincy Jones soundtracks dexterously lurking inside every syncopated beat) and there is a ferocious ebullient aura surrounding every moment, and for the life of me I simply could not wait to see and hear where Iñárritu and his team were dining to take me next.

Birdman comes with the incredibly laborious, Kubrick-esque subtitle The Unexpected Virtue of Ignorance, and as unwieldy as that might be, it’s also fitting. Iñárritu doesn’t proclaim to know everything. He understands just how short-sighted and clueless his characters are the majority of the time. But he is also able to find the majesty in these perceived shortcomings, knowing that magic oftentimes is created when those giving birth to it don’t even know that is exactly what it is they have doing all along.