Los Angeles. 2049. A Blade Runner (Ryan Gosling) is tasked by his commander Lt. Joshi (Robin Wright) to continue to hunt down renegade Replicants and send them into “retirement.” In order to complete his mission, he discovers the need to track down a fellow Blade Runner, former LAPD detective Rick Deckard (Harrison Ford), still considered the best man to have ever held this position. But he went missing in 2019 after completing his most difficult assignment, covering his tracks so well no one has uttered his name, let alone seen him alive, these past 30 years. 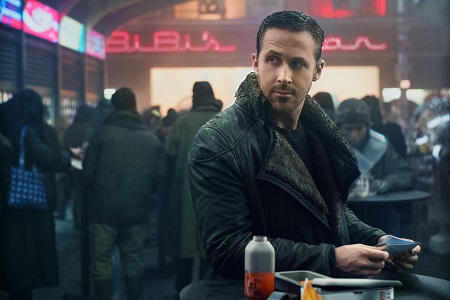 Still inspired by the classic novel Do Androids Dream of Electric Sheep? by the great Philip K. Dick, with a script conceived by returning screenwriter Hampton Fancher and co-written with Logan scribe Michael Green, all of it overseen by executive producer Ridley Scott who turns over the directorial reins to Sicario and Arrival impresario Denis Villeneuve, Blade Runner 2049 is every bit as ambitious as the 1982 science fiction classic it follows in the footsteps of. It is a movie overflowing in big ideas and stunning images, its story still transpiring within a dystopian noir future where the line between human and artificial has been blurred into nothingness. This is a worthy, thoughtful and intelligently composed sequel, and much like Scott’s original film this follow-up is guaranteed to provoke passionately heated debate and discussion that will continue long into the foreseeable future.

This chapter in Rick Deckard’s ongoing tale is even more convoluted than the story charted out in the previous Blade Runner. Its themes are bigger. Its ideas are bolder. Its concepts even more adventurous. But it can also feel moderately pretentious and self-important, Fancher and Green’s script wrapping itself into circles in order to ensure all of the various pieces fit together while at the same time still relate back to the 1982 film. It’s all pretty clever, but it can also feel moderately mechanical, some of the bits contained within the story’s midsection not always cracking with the same vigor as the stuff surrounding it almost consistently is.

Even so, Villeneuve is a directorial magician, and even at over 160 minutes in length this sequel never feels padded or overlong. While methodically paced, there is still a driving intensity that’s undeniable. Villeneuve never wavers, refuses to turn away, the sights and sounds he chooses to showcase all adding another layer to the mystery, each answer he offers up signaling a new question that also needs to be resolved. He weaves through Fancher and Green’s screenplay with mesmerizing skill, and no matter what visual wonders are unleashed or how many psychological conundrums are posited, it is the human story at the center that always stays in focus.

It is this idea of what makes one human that is at the core of what is going on. Pulling even more from Dick’s source material than the initial film did, all of the concepts and ideas relating to consciousness, to whether or not it can be proven what sort of creature has a soul and which kind does not, those are the topics of most concern. Replicants are made, grown in a lab and engineered to take orders. But can they evolve? Do they have a consciousness that is unique unto them and to no other? Do they long for the touch of another? Do they lust? Do they love? Heck, do they actually dream of electric sheep? These are the burning questions, Villeneuve and company keeping them in constant focus, all that ends up transpiring throughout the film having everything to do with the answers theorized by human and Replicant alike.

I can’t say enough about the performances. Gosling, Ford, Wright, all three are outstanding, as are fellow supporting players like Dave Bautista, Jared Leto, Ana de Armas, Mackenzie Davis and especially the spellbinding Dutch actress Sylvia Hoeks. Thing is, as great as they all are, and as complex as their performances all become, I can’t tell you a thing about anything it is they are doing. To spend even a syllable doing so would spoil a number of the film’s more captivating surprises, each second of the motion picture delivering one reveal after another, and these actors and the characters they are all portraying each feed into that in a multitude of unforeseen ways.

What I can say is that Roger Deakins (Hail, Caesar!, Prisoners) once again proves why he is considered one of the all-time greats behind the camera. It would have been easy for the veteran cinematographer to have rested on his laurels, been content to offer up visual compositions that emulated Jordan Cronenweth’s spectacular visions from the original motion picture without putting his own distinctive stamp on the material. Instead, each image is its own clue to solving the narrative riddle, Villeneuve granting him the freedom to make this world his own just as long as the visuals all add something to the story and don’t just stand out because they’re inventively gorgeous.

It took Blade Runner time to finally be recognized as a classic. Its original 1982 incarnation was not what was intended, but thanks to the dedicated cult following the film achieved over the years, Ridley Scott was allowed to present something close to what he wanted in 1992. In 2007, he was able to return to the film one more time, offering up what he called his “Final Cut,” and while this version didn’t differ too significantly from the one he released 15 years prior, that does not make it any less definitive.

I feel pretty safe in stating Villeneuve isn’t going to have to worry about re-cutting his sequel. It’s hard to imagine this motion picture isn’t exactly what the director intended, Blade Runner 2049 an enthralling science fiction tour de force that will only get better and more emotionally invigorating with each additional viewing. While I still have questions, I felt the same way when I discovered the original film way back when I was still in elementary school. Over time, I’ve come to regard that one as a masterpiece, even the so-called “flawed” versions Scott was never satisfied with. Part of me feels I’m going to end up feeling the same about what Villeneuve has done here as well, and unlike tears in rain my excitement and enthusiasm for this franchise is unlikely to vanish anytime soon.