Michelle Darnell (Melissa McCarthy) has lost it all. Arrested by the SEC for insider trading, she’s spent the last four months in prison during which time the 47th wealthiest woman in the world saw all her assets seized by the government. Now out of jail, she turns to former assistant Claire (Kristen Bell) for help, crashing in the single mom’s apartment, striking up a cozy friendship with her daughter Rachel (Ella Anderson) while living there. 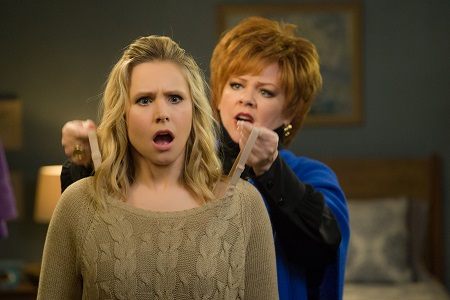 Never one to go down without a fight, Michelle sees a business opportunity blossom right in front of her eyes, and it involves Rachel’s eagerness to give back to her community as well as Claire’s awesome brownie recipes. Together, this trio will prove to be an unstoppable force. More, it’s going to make Michelle a household name, not to mention filthy, stinking rich, once again. But her own greed and an inability to make lasting emotional connections with those closest to her could potentially hold this one-time moneymaking heavyweight back; and while a quick buck can be made, it might just come at the expense of Claire and Rachel’s love.

There isn’t much going on in The Boss, McCarthy and her director/co-writer/husband Ben Falcone’s follow-up to 2014 disaster Tammy, and as far as plot goes there’s a general feeling that the pair, along with fellow screenwriter Steve Mallory, are making most of what transpires up as they go along. It’s all built on the thinnest sliver of narrative devices, self-centered elite brought to the level of those they used to look down on learning to be a better person as they rebuild their fortune, and as such expecting anything analogous to a surprise is a waste of time. The movie goes exactly where you expect, the only real question being what sort of craziness McCarthy, Falcone and Mallory will unleash upon the viewer as they make their way along this well-worn path.

The good news? This comedy is much, much better than Tammy was. McCarthy and Falcone, while still eager to subvert convention, and more than willing to showcase a central character whose likability quotient isn’t particularly high, have thankfully not pushed the envelope so far to the extreme that they forget to bring the funny. They’ve lightened things up just enough that a sense of fun can be felt at various points throughout. Additionally, they also allow Bell the freedom to do her own thing, and as such Claire becomes slightly more multidimensional and interesting than she otherwise could have been.

The bad news? There’s not a lot of story, even for a comedy that runs just a little over 90 minutes in length, and what there is of one can descend into an uncomforting abyss of bad taste that’s somewhat distasteful. There’s an extended sequence featuring a mêlée between two feuding Girl Scout-like troops that’s nowhere close to funny and instead ends up being nothing short of a minor embarrassment for almost all involved. A subplot involving Michelle’s conniving, revenge-seeking ex-boyfriend and business associate Renault goes nowhere, actor Peter Dinklage giving his all to the character even if doing so doesn’t do him any favors. Additional guest stars including Kathy Bates (channeling her season seven “The Office” character), Cecily Strong, Kristen Schaal, Annie Mumolo, Michael McDonald and Margo Martindale are all wasted in throwaway parts, only a goofy, good-natured Tyler Labine allowed to make anything more than just a passing imprint upon the proceedings. 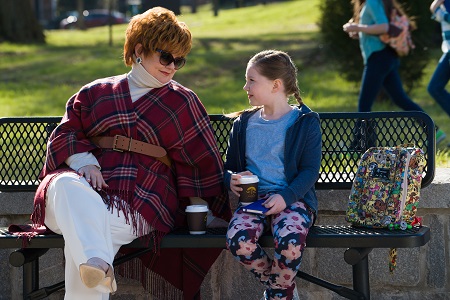 Not that the rambling nature of all of this doesn’t at times have its charms. There’s a humorous skit featuring McCarthy and Bell discussing – and fondling – one another’s breasts, while a few of Michelle’s verbal putdowns of some of Rachel’s classmates’ mothers are ruthlessly inspired in their unapologetic vulgarity. Falcone also stages a number of ingenious sight gags, most of them having to deal with the youngsters who have bonded together to make the growing brownie business a success, while a joke involving a foldaway couch got me to laugh out loud even though I saw it coming from a million miles away.

I guess there is something of a minor Troop Beverly Hills meets Big Business vibe going on, McCarthy channeling her best Shelley Long meets Bette Midler as she moves her way through a variety of self-manufactured travails. At the same time, she and Falcone are also going for that unhinged anything-can-happen Anchorman or Step Brothers thing, and considering Will Ferrell and Adam McKay are two of the producers this should hardly be considered shocking. Some will find this hodgepodge of comedic combinations hysterical. Others, like myself, will be left scratching their heads wondering what so many in the audience are finding so funny. While there’s plenty about The Boss to appreciate, I’m just not certain there’s a great deal to like, the difference between the two ultimately making the finished film an entertainment business opportunity I’d personally pass on.