Writer/director Robin Campillo’s (The Class) 2017 Cannes Film Festival Grand Jury prize winner BPM (Beats Per Minute) lives up to the hype. What could lazily be described as the Parisian flipside to David France’s Oscar-nominated How to Survive a Plague, this movie, which is not a documentary, is a complex, emotionally resonate piece of historical fiction that packs a pretty devastating wallop. Set in 1992, the film isn’t just about the birth of Act-Up in France, but also ends up being social document chronicling the differing ways individuals banded together to combat the early days of AIDS epidemic, forcing those holding the political and corporate purse strings to reevaluate their priorities even when they weren’t initially inclined to do so. 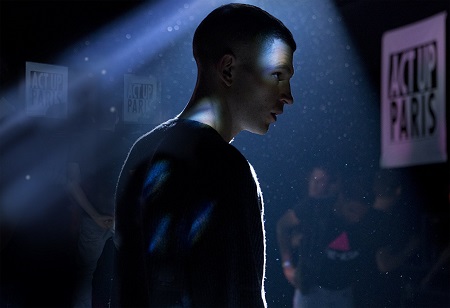 Mixing fact and fiction, Campillo’s story follows Nathan (Arnaud Valois), a youngster who isn’t particularly politically active but finds himself infatuated with outspoken activist Sean (Nahuel Pérez Biscayart). He’s one of the more radical members of the Act-Up movement, constantly pushing things further than the group’s leaders Thibault (Antoine Reinartz) and Sophie (Adèle Haenel) are often comfortable with. He has his reasons, and they’re as urgent as they are personal, Sean obsessed with changing the status quo so politicians have to get more involved in the fight against HIV and so drug companies will have to stop dragging their feet in bringing new treatments to market.

The strength of Campillo’s epic drama is the way it is able to balance all its many storylines with such deft, introspective simplicity. Act-Up is working overtime to force pharmaceutical giant Melton-Pharm to publicly release their test results as it pertains to AIDS and HIV, knowing if they do so this insight into the disease could help medical professionals treat the afflicted better than they currently are able to while at the same time forcing politicians to recognize just how bad this growing epidemic is. At the same time all this is happening, Nathan and Sean slowly fall in love, while others in the movement, most notably Sophie, magnificently portrayed by Haenel, face their own personal travails.

Campillo doesn’t shortchange any facet of his story. While the procedural pieces chronicling the fight against Melton-Pharm is thrilling, even better are a series of debates that get more engrossing, and more emotionally heated, as the film progresses. At the same time, Nathan sees his worldview expanded in ways he never thought possible, and whether sweating alongside Sean on a neon-lit dance floor, or coming to grips with the realities of the disease as he watches the newfound love of his life slowly waste away into a shell of his formerly virile self, this personal tale juxtaposed beautifully with the larger, more documentary-like narrative that surrounds it.

Biscayart gives one of the best performances of 2017. Full of life, overflowing in energy and enthusiasm, he showcases AIDS’s assault against Sean’s body and soul with a selflessly raw ferocity that’s oftentimes chilling. The actors share spectacular chemistry, the pair oozing a form of sexual camaraderie that’s superb. Biscayart layers his portrayal with moments of humor that are just as apt to erupt into fiery anger as they are to open up to emotional despair, the two lovers sharing a final moment that ripped my heart to pieces with minimalistic urgency. As already stated, Haenel is also excellent, Sophie’s journey nearly as fulfilling and as mesmeric as Nathan and Sean’s also proves to be. 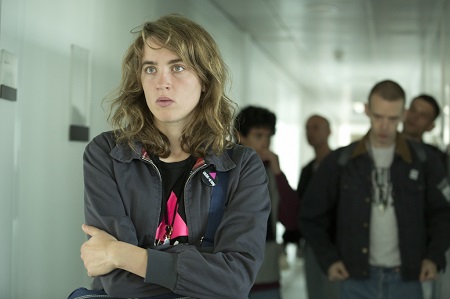 I could have done without Arnaud Rebotini’s (Eastern Boys) intrusive score, and I can’t help but feel a key sex scene between Valois and Biscayart would have played a heck of a lot better without his music accompanying the moment. The film’s opening flashback, while ultimately a moderately powerful introduction to the larger story these characters are all a part of, doesn’t begin all that organically, and as such it took me a little while to get emotionally involved in what was going on and why I should care if Nathan ends up becoming a part of the Act-Up movement.

These prove to be minor annoyances more than they do anything else. Working with collaborator Philippe Mangeot (Summer Nights), Campillo’s script adroitly explores this time and place in history with masterfully meditative resilience. No punches are pulled, and these characters are hardly saints, their collective sins as readily apparent as their otherwise more laudably selfless attributes undeniably prove to be. All of which augments the emotional components considerably, and by the time things build to their destructively complex conclusion euphoria and tragedy coexist with a naturalistic poise that’s glorious. BPM (Beats Per Minute) wrecked me something fierce, Campillo’s latest a piece of historical fiction that’s just as relevant today as it ever was a quarter-century ago.