Mischievous fourth graders George Beard (voiced by Kevin Hart) and Harold Hutchins (Thomas Middleditch) have been best friends for as long as they’ve been a part of the Public School System. They knew they were destined to be together the second they realized they shared a similar sense of humor, especially as it pertained to not-a-planet planet Uranus, the duo unable to hide their juvenile giggles whenever it was mentioned by the teacher. As far as the kids at Jerome Horwitz Elementary School, the two are bona fide heroes, their history of successful pranks, especially those engineered to get under the skin of totalitarian Principal Krupp (Ed Helms), the stuff of legend. 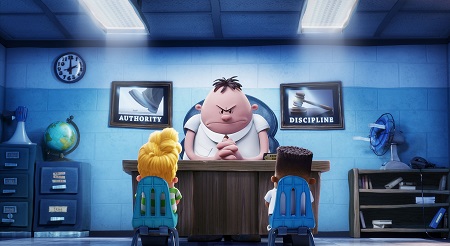 But thanks to the underhanded tactics of brownnosing fellow student Melvin Sneedly (an unrecognizable Jordan Peele), George and Harold are in all kinds of trouble. For the first time Principal Krupp has the goods on the two youngsters, and he’s going to do the one thing to the pair that will ensure their days of trickery and subterfuge is over: He’s going to put them in separate classes! It’s the end of the world as they know it and they don’t feel fine, and unless they can circumvent the elated educator’s plans, their lifelong friendship might be placed in jeopardy.

Based on the wildly popular series of illustrated children’s books by author Dav Pilkey, Captain Underpants: The First Epic Adventure is a totally insane bit of animated fluff that’s almost certain to keep the title’s legions of fans happily satisfied. With a witty, child-friendly script by comedy guru Nicholas Stoller (Get Him to the Greek, The Muppets) and confidently self-assured direction courtesy of DreamWorks veteran David Soren (Turbo), the movie is far more engaging than it potentially has any right to be, and as implausibly ridiculous as it all is, save a few minor hiccups this ends up being a delightful summer surprise I can’t say I saw coming.

The crux of all this zany absurdity is that George and Harold have accidentally hypnotized Principal Krupp into believing he is the tighty-whitey wearing superhero Captain Underpants, a comic book crime fighter the pair created in their tree house to amuse themselves. At the snap of their fingers Krupp is gone and only Underpants remains, the fact of which would be hilarious if not for the fact this selfless nincompoop believes he has superpowers when in reality he obviously has nothing of the sort. If the kids aren’t careful their Principal will get himself hurt and not even know it, a glitch in their overall plan made all the more terrible considering there’s an actual supervillain calling himself Professor P (Nick Kroll) clandestinely working at their school as the new science teacher.

I’m not even going to try and explain what the bad guy’s plan is, mainly because in the grand scheme it’s barely worth caring about. There’s a giant toilet involved, as are some toxic leftovers sitting in the school’s cafeteria, but in all practicality Stoller’s script is scarcely interested in any of that stuff. Instead, he and Soren are more concerned with George and Harold. They go out of their way to cement the pair’ friendship in something authentic and true, and no matter how obnoxious or foolish events surrounding them become the two kids are pleasantly grounded in the real world in a way nothing else inside this movie ever bothers to try and equal.

That’s why Captain Underpants works. As funny as the practically naked, resolutely out-of-shape superhero proves to be, he’s not actually the main character of a motion picture that bears his name. No, the focus is on George and Harold, and that’s exactly as it should be. While the movie traffics in bizarre, larger-than-life absurdities DreamWorks films ranging from Madagascar, to Mr. Peabody & Sherman, to Home to even this year’s surprise hit The Boss Baby have buttered their bread with for almost two decades now, this is one of those rare occasions where the emotions fueling the animated engine don’t ever come across as anything less than genuine. 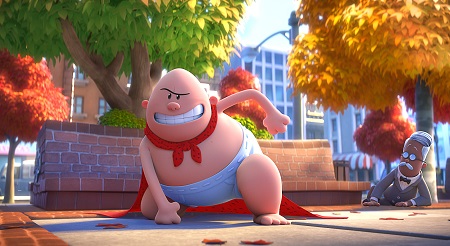 Not that we’re talking greatness here by any stretch of the imagination. This isn’t another How to Train Your Dragon or Kung Fu Panda. Heck, it’s not even another Shrek. For all this movie’s many plusses it’s still pretty darn childish, and whenever it strays from George and Harold’s relationship and starts playing inside the more nonsensical playground where the split psyche of Krupp/Captain Underpants and nefarious designs of Professor P battle it out for supremacy the less interest I had in discovering who would emerge victorious. The jokes during these sequences don’t have the same wit or precision as they do elsewhere in the story, and for all Stoller’s gifts as a screenwriter bringing the more fantastical aspects of Pilkey’s popular literary world to life sadly is not one of them.

Still, when I look at the larger picture, when I sit back and realize just how often I laughed and take stock in the knowledge I sat in the theatre and grinned ear-to-ear for almost the entirety of the film’s quickly paced 100 minutes, I can’t help but proclaim this animated adaptation a success. Stoller and Soren do a fine job making this adventure in growing up entertaining for kid and adult alike, and while I can’t foresee Captain Underpants: The First Epic Adventure spawning any additional cinematic chapters in George and Harold’s heroic tale, if it sends viewers to the library and the bookstore to discover what happens next that’s perfectly fine by me.