Forensic neuropathologist Dr. Bennet Omalu (Will Smith) has made a startling discovery. While performing an autopsy on one-time Pittsburgh Steelers great Mike Webster (David Morse), he sees an anomaly on the man’s brain that vexes him. Much to the consternation of his immediate supervisor Daniel Sullivan (Mike O’Malley), but with the support of Allegheny County Coroner and Medical Examiner Dr. Cyril Wecht (Albert Brooks), Dr. Omalu continues his investigation, what he discovers having far-reaching repercussions he never could have imagined. 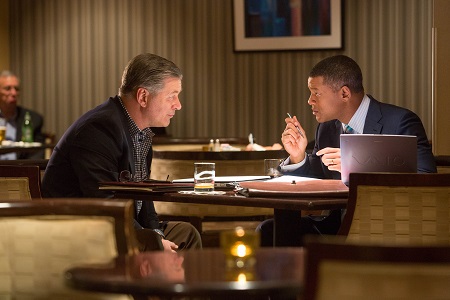 Said discovery was “Chronic Traumatic Encephalopathy,” otherwise known as CTE, a brain condition caused by repeated head trauma, the likes of which are only acerbated in the playing of professional football. As such, Dr. Omalu’s 2002 discovery was not exactly music to the ears of the NFL, the gigantic sports league taking the better part of a decade to embrace the physician’s findings. Changing a number of rules involving on-the-field contact and evaluations for concussions after especially vicious blows to the head, it’s safe to say the doctor’s research has changed the game forever, and who knows what it will look like in the future as CTE science continues to progress.

Writer and director Peter Landesman’s (Parkland) procedural Concussion, partially based on a 2009 GQ magazine profile of Dr. Omalu entitled “Brain Game,” chronicles the Pittsburgh neuropathologist from the time he made his discovery, through his battles with the NFL, to eventual recognition as a ground-breaking scientist who helped bring to light a devastating medical condition affecting athletes across a wide variety of sports. It’s a fairly straight-forward presentation of what went down, mostly focusing on his friendship with Dr. Wecht, as well as his close working relationship with former NFL sideline physician Dr. Julian Bailes (Alec Baldwin). The former is key in attempting to protect him from those who’d like to shut down his research, while the latter is vital in getting him access into the close-knit society of NFL players past and present, both important in making sure Dr. Omalu’s findings achieved validation from the scientific and athletic communities.

And that’s fine. The heart of the movie is pure, and the messages it is urgently trying to convey in regards to safety and accountability in professional sports are certainly timely. Landesman’s style is workmanlike, not particularly fussy, leaving his actors free to roam and create while the central narrative never strays too far outside a relatively safe and predictable template. He tasks cinematographer Salvatore Totino (People Like Us) and editor William Goldenberg (Zero Dark Thirty) to help him craft sequences that remain professional and aboveboard, never allowing the visuals to steal too much attention so the performances remain at the center of things no matter what.

The problem, however, is twofold. On one hand, it’s all played so safe one can’t help but wonder if Landesman would have rather made a documentary about the groundbreaking doctor’s work than a feature film. On the other, he attempts to gin up tension when, in all honesty, he’s composed a story more or less free of it, as such when these moments take place they can’t help but feel hurried and false whether they really happened to Dr. Omalu and his wife or not. As handsomely composed as Concussion is, there is a rudimentary staleness difficult to get beyond, the film never rising to the same heights as 2015’s other major procedural, Tom McCarthy’s close to brilliant Spotlight.

Still, Smith’s turn as Dr. Omalu is as spectacular as any in his entire career, and it’s wonderful to see him fully invested in a character for the first time in what feels like forever, at least since 2006’s The Pursuit of Happyness, probably since his immersive, eye-popping turn as the titular heavyweight champion in 2001’s Ali. He’s gone all-in, allowing Landesman to lead him into complex, impassioned corners of obsessions, egotism, selflessness and regret that are transfixing. What’s more, Smith never overplays his hand, refuses to go too far, and as such his performance packs a more ferocious punch because of this.

Baldwin and Brooks are almost equally as terrific, the former in particular, both actors having a field day sharing scenes with their talented co-star as they attempt to build the case that the NFL’s handling of concussions and CTE was something akin to criminal. Also worth mentioning is Morse as Hall of Famer Mike Webster, his unforgettable, if understandably brief, appearance as the legendary Pittsburgh Steeler lineman so superb I almost wish the movie could have been about him battling this illness instead of the man who diagnosed it after his death. His appearances in the first act are visceral, emotionally jolting, and I don’t think Dr. Omalu’s gentle, tenderly sincere handling of the warrior’s body and brain would have meant near as much as they did without Morse’s magnificence. 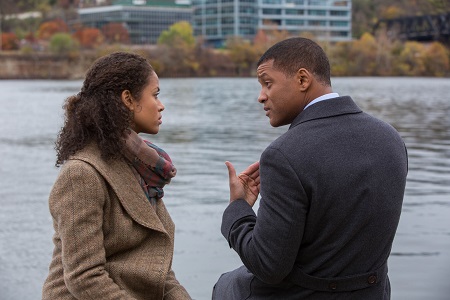 At the same time, the staggeringly gifted Gugu Mbatha-Raw is all but wasted as Prema Mutiso, Dr. Omalu’s wife, given the thankless task of looking on lovingly at her husband while also suffering through various physical traumas, most having to do with her first pregnancy. It’s a retro role more suited to a 1950s melodrama save for the fact most of those at least gave their equally talented actresses a scene or two to cut loose. Here, Landesman doesn’t seem to have the first clue as the best way to utilize her, and the only reason Mbatha-Raw makes any imprint at all has more to do with the chemistry passing between her and Smith than it does anything else.

Not that I can come down too hard on Concussion. The film is never less than watchable, and thanks to the collective efforts of Smith, Morse, Baldwin and Brooks it’s oftentimes more than that. Landesman remains a capable filmmaker, one who thankfully believes in restraint, allowing audiences to figure out what is going on and why for themselves. But there is an oddly inconsequential aura permeating things that just feels wrong considering the subject matter; and if the NFL is obsessed with underplaying the consequences of professional football as well as the effects of CTE, it’s unlikely this movie is going to make it any more difficult for them to keep doing just that.