“Boys. I know you can hear me. You are in a whole lot of trouble.”

“Travis (James Freedson-Jackson) and Harrison (Hays Wellford) are two ten-year-old best friends who have decided to venture away from home all on their own. In the middle of a deserted field, miles from any place important, the two come across an empty –and unlocked – cop car, its rightful occupant nowhere to be found. As bad ideas go, getting in and playing around with the baubles, trinkets and accessories within rates fairly high on the scale. But above that? How about driving away with the darn vehicle, hitting the highway for a joyride? Even at only ten, that’s probably about the worst thing two kids with nothing better to do could come up with to waste a throwaway, nothing all the exciting going on, weekday afternoon.

Stealing the car was terrible enough, but when you throw in the fact that this just happens to be Sheriff Kretzer’s (Kevin Bacon) vehicle, and that he’s dirty, so dirty he was disposing a dead body out in a tiny corner of the woods, things are quite a bit worse than either boy can even begin to realize. Throw in that fact there’s another body (Shea Whigham), bruised, battered and decidedly unconscious, sitting in the trunk, and Travis and Harrison’s little joyride has the potential to not just be disastrous, but a threat to both of their young lives, as well.

Director Jon Watts, collaborating again with his Clown co-writer Christopher D. Ford, hasn’t made the greatest ice-cold comedic coal black noir in the world, but he has made one that’s a heck of a lot more enjoyable than it has any right to be. An odd combination of Blood Simple and The Goonies (on a much smaller, more compact scale), Cop Car is on one hand a saga of adolescent choices gone off the rails and, on the other, a dirty cop thriller where two wrongs just lead to another, more horrific wrong, one that never comes close to transforming into anything resembling right.

The thing is, as fun as a great deal of this might be, as slickly directed as it all undeniably is, even at a brisk 86 minutes the film oftentimes feels more like a short than a complete feature, its ideas running closer and closer towards empty as things reach their moderately preordained conclusion. Once the central gimmick kicks into gear there aren’t a ton of places things can go to, and even if the last scene is somewhat haunting in its eloquent simplicity the stuff that transpires directly before it is hardly revelatory.

Thankfully, Bacon is outstanding, going full-bore as the freaked-out, drug-addle dirty cop who starts careening more and more out of control as it begins to dawn on him just how catastrophic the pair’s theft of his car is going to be for his personal wellbeing. His increasingly manic behavior is of the Wile E. Coyote variety, and the only thing keeping him at arm’s length from this particular Road Runner are Acme anvils of his own creation. It’s a nice comedic turn for the actor, one that allows him to exert muscles he doesn’t often get the opportunity to exercise, seeing him to do so a splendid little treat I enjoyed consuming.

Also a plus, the film is beautifully constructed. The cinematography by Matthew J. Lloyd (Project Almanac) and Larkin Seiple is superb, as is Phil Mossman’s (I Origins) score. There is a lived-in, realistically dingy quality to the time and place that Watts has crafted that’s palpable, tangibly authentic. As for Freedson-Jackson and Wellford, the two child actors both give fine performances, and even when their actions bend credulity to its breaking point the pair do an impressive job making the most unbelievable moments feel genuine. 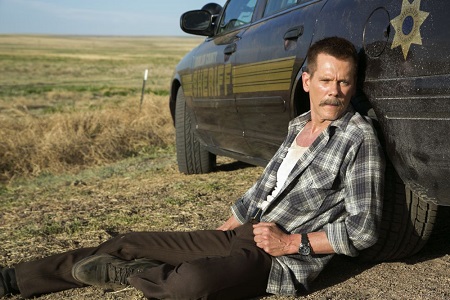 It’s hard not to wish the movie did more with Whigham than keep him in the thankless role of one dimensional thug, and to say Camryn Manheim is wasted in a unrewarding throwaway part is understating just how cynically callous her entire presence arc proves to be. But, in the end, it’s hard not to find plenty to like about Cop Car, and as minor as this little thriller might be Watts’ directorial talent is still undeniable, and as such for those who tend to like this type of thing the movie offers up a ride worthy of the taking.”

Cop Car is almost perfect watch at home, turn out all the lights, make yourself some popcorn, late night entertainment fodder. Silly and slight, yes, but a heck of a lot of fun, anchored by a performance from Bacon that’s a total unhinged hoot start to finish. While not a great film, this is still a remarkably entertaining one, my second time watching it an even more pleasurable experience than the first one was.

Their First and Last Ride: The Making of Cop Car (2:58) – Perfectly superfluous featurette that adds close to nothing. Pity.

A HD Digital Copy of the film is included with this release.

Cop Car is slight, but that doesn’t make it any less entertaining. A down and dirty low budget thriller revolving around solidly intriguing premise, the movie’s ace in the hole is its star Kevin Bacon, the actor delivering a performance of depraved incomprehensible bewilderment that’s viscerally compelling throughout. This is a good movie, one that plays exceedingly well at home, Universal’s Blu-ray presentation, lack of special features notwithstanding, close to perfect.