It is 1901, a new century is still in its infancy and Edith Cushing (Mia Wasikowska) is eager to make her mark on the world. Coming from a working class background, her loving father Carter (Jim Beaver) a self-made man who molded his New York reputation, and his fortune, through hard work and an unstoppable resolve, the young woman is looking to be a writer on the same level as Mary Shelley, crafting dark, dangerous stories of the macabre she just knows readers will thrill to. 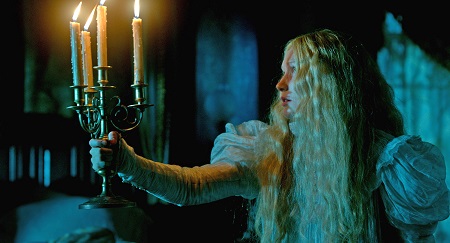 Into her life comes mysterious Englishman Thomas Sharpe (Tom Hiddleston). He and his sister Lucille (Jessica Chastain) have come to America looking for financial backers to fund a miraculous invention they believe will revolutionize the mining industry. There is something about this tall, well-mannered foreigner that catches Edith’s eye, so much so she finds herself falling for him, much to the consternation of the protective Carter. Yet, when tragedy strikes, she finds it easy to fall into his comforting arms, the pair getting married and eventually heading back across the ocean to the Sharpe’s ancestral home, the secluded countryside mansion Allerdale Hall.

There are ghosts lurking everywhere in director Guillermo del Toro’s latest spine-tingling horror opus Crimson Peak, but much like similar supernatural winners Pan’s Labyrinth and The Devil’s Backbone, the real dangers coming to assault the protagonists here are of a much more human nature. Allerdale Hall is by all accounts a house that literally drips blood, the thick, gelatinous red clay on which the mansion was built seeping through every nook, cranny and crevices. It gives things a sinister, unsettling atmosphere that only becomes more disquieting when bruised, battered and deformed apparitions make themselves known to a confused, yet still curious, Edith, the reasons for their arrival the central mystery around which all events inside del Toro and co-writer Matthew Robbins’ (Dragonslayer, Mimic) malevolent screenplay revolve.

Those expecting some down and dirty tale of ghosts out for revenge have another thing coming, del Toro’s name-dropping of Frankenstein author Shelley early on speaking volumes. This movie owes more to Alfred Hitchcock’s take on Daphne Du Maurier’s Rebecca or Francis Ford Coppola’s unabashedly sexual envisioning of Bram Stoker’s Dracula than it does Paranormal Activity or The Grudge, the whole thing a rapturously elegant old school gothic opus that emphasizes the sensual above everything else. The pace is measured, relationships between the three leads key and the house itself becomes a character maliciously helping to orchestrate the action; and while the conclusion is suitably violent, it’s never so much so it overshadows the emotions fueling the carnage.

At the same time, said central mystery is very easy to solve, and while watching the pieces being put together is an uncomforting hoot those with even a moderately keen eye know where all this is heading within the first few minutes. Additionally, as dashing heroes go, Charlie Hunnam, playing Edith’s former suitor and erstwhile protector, Dr. Alan McMichael, leaves a great deal to be desired. He’s got nothing to play, del Toro and Robbins writing him the movie’s only completely invisible character (and this includes the ghosts themselves), his love-struck surgeon cum amateur investigative detective a one-dimensional cypher who isn’t faintly interesting.

Thankfully, the rest of Crimson Peak is superb. Thomas E. Sanders’ (Saving Private Ryan) production design is a triumph, the rotting beauty of Allerdale Hall speaking for itself. Same goes for Kate Hawley’s (Edge of Tomorrow) magnificent costumes, each piece of clothing having a lived-in carnality that’s uncomfortably intimate, helping the actors disappear into their respective characters  more than just their performances alone would allow. As for veteran Dan Laustsen’s (Brotherhood of the Wolf) camerawork, it’s divine, each image having a hypnotically eerie elegance suiting the proceedings perfectly.

Then there are the performances of Wasikowska, Chastain and Hiddleston. All three are terrific, each digging deep, giving themselves over wholly to del Toro’s psychologically unhinged turn-of-the-century gothic world. Wasikowska is a wonderful heroine, a strong-willed presence who, in spite of her fear, continues to search for the truth knowing doing so might be the only way to ensure survival while also potentially allowing the restless souls stumbling through Allerdale Hall some semblance of peace. Chastain is equally stunning, devouring her lines with a cadaverous relish that’s almost reptilian in its seductive viciousness. 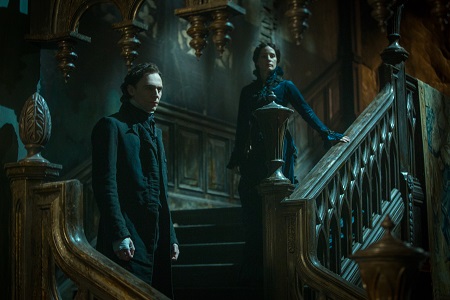 As for Hiddleston, for those who only know him as the Marvel villain Loki, they will be gob smacked by his cryptic, heartbreakingly complex majesty. You can feel the ghosts of Laurence Olivier and Gary Oldman influencing his performance, as well as elements of his aloof, set adrift rock star vampire from Jim Jarmusch’s Only Lovers Left Alive, but then the actor takes things in such an internalized, self-aware direction the overall impact is staggering. He is a romantic victim to the nth degree, understanding his failures and shortcomings yet remaining terrified to do anything about them. Thus, when the time comes, when life and death must be decided, Hiddleston makes this moment of truth stunning to behold, a heartfelt moment of clarity and purpose the consequences of which stuck a dagger through my heart while also bringing a couple of tears to my eyes at the same time.

It’s no secret that del Toro’s affinity for horror and its romantically gothic undertones are immense. Elements of this are obvious throughout Harry Potter and the Prisoner of Azkaban (as well as both Hellboy adventures), while his two bona fide masterpieces The Devil’s Backbone and Pan’s Labyrinth dwell in this seductively chilling realm with a quietly unnerving majesty unique in and of themselves. Even more traditional, Hollywood-friendly efforts like Mimic, Blade II and Pacific Rim have their moments where they drip into this morbid terrain, making each of them more emotionally intriguing because of this than they maybe had any right to be.

While there are issues, most of them are so minor, and the pleasures the film unleashes are so massive, Crimson Peak is still a shimmering example of gothic romantic horror at its best. With top-notch performances from Wasikowska, Chastain and Hiddleston, featuring stellar technical efforts from the entire production team, del Toro has crafted a magnetic spellbinder that does the genre proud. It’s one of the acclaimed director’s better efforts and, more than that, it’s also one of the year’s most memorably fascinating thrillers.