Investigative reporter Nicole Rawlins (Sophie Cookson) is positive she’s lucked into an incredible story. An eastern European nun, Sister Adelina Marinescu (Ada Lupu), is dead, and a country priest is under arrest for her murder. Turns out, he was conducting an unauthorized exorcism, going so far as to tie the supposedly possessed woman to a giant wooden cross as if she were being crucified in order to expel to evil demon buried within her. Nicole believes she can write a story that will expose this religions nonsense for what it is, the ardent non-believer eagerly excited to write a story that could shine a light on an area of the Catholic Church they’d likely want to keep a secret. 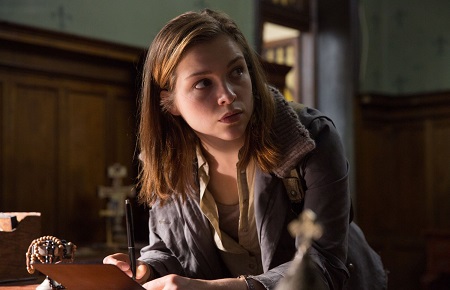 Things are not what they appear. Turns out, Sister Marinescu was acting beyond strange months before the exorcism was conducted, her strange, violent behavior disturbing to everyone she came into contact with. Worse, Nicole is starting to have visions, a strange series of psychic events one after the other, almost as if some sort of malevolent entity is stalking her, doing whatever it can to keep her from the truth. Making friends with the kindly Father Anton (Corneliu Ulici), the reporter discovers it is her beliefs that might be erroneous, and if she can’t find a reason to accept that God does indeed work in mysterious ways it will likely be her immortal soul that will be in jeopardy of being destroyed by Hell’s demonic minions.

For screenwriters Chad and Carey W. Hayes, the new exorcism thriller The Crucifixion reminds one more of the pair’s 2007 misfire The Reaping than it does their 2013 success The Conjuring. Featuring characters who are rarely interesting, centering on a tired, overly familiar scenario that’s as routine as it is unremarkable, their story plays out like some sort of bloody, R-rated bit of Sunday School gobbledygook, almost as if it is constructed and designed solely to make a didactic theological point instead of creeping out, and hopefully entertaining, an eager audience anticipating a handful of artfully composed thrills and chills. This is a tired, frustratingly banal piece of genre pulp fiction that even at only 91 minutes feels like it goes on for an eternity, and the only thing I wanted from the movie was for it to end so I could go do something else.

I did not expect this to be the case. Directed by Xavier Gens, the rather blandly forgettable Hitman notwithstanding, this passionate French wunderkind was responsible for two of the more interesting and viscerally unsettling genre efforts in recent memory, the disturbingly gruesome horror effort Frontier(s) and the emotionally bleak apocalypse thriller The Divide. Based on those two films alone, I’m always prone to get excited about whatever it is the filmmaker has up his sleeve next. Gens has proven himself, even with Hitman, to be a visually ambitious director prone to conjure up excitingly disconcerting images that stick with the viewer long after his film has come to an end. I wholly expected that would be the case here. How sad I was to discover this was disappointingly not the case.

That’s slightly unfair. The climactic sequence, as dumb as it might be from a plot standpoint, looks incredible. The upside rain, the dingy interiors, the lighting and sound effects, all of these technical elements come together masterfully. It is as if this moment is the sole reason Gens signed on to make the film, the idea he could craft an exorcism sequence unlike any put to screen before a challenge he was more than ready to accept.

Shame, then, that the rest of the film is so unrelentingly boring. Nicole’s theological struggle is a serious waste of time, the path she walks upon needlessly cryptic and ponderously rudimentary, both at the exact same time. Her relationship with Father Anton is even worse. The movie can’t seem to decide if it wants to start a romance between the two of them or if it would rather keep their interactions more intellectually grounded. On the first part of that statement, Cookson and Ulici have practically zero chemistry, and even when they’re supposed to be making nice with one another, trying to make a deeper connection, these moments fall frustratingly flat. As far as that latter observation goes, the pair’s conversations are so titled towards Father Anton’s point of view it’s almost as if Nicole shouldn’t have any sort of opinion in the first place, the level of mansplaining taking place just plain silly. 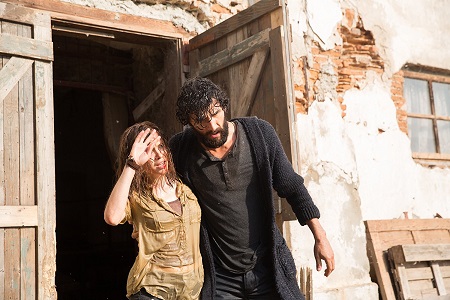 And that’s the real problem. Nicole is presented as being an intelligent journalist who is willing to ask difficult questions even if they go directly against her personal feelings or predetermined thesis. But she never really gets to uncover anything, and for all the digging she does to ascertain some approximation of the truth, the reality is that few take her inquiries seriously, everyone spending more treating her like a clueless airhead than they do a seasoned professional just doing her job. It’s all incredibly patronizing, and even when Nicole is given the respect she deserves it’s usually in a way to push the exposition forward where it needs to go and not to develop the character in any way that’s meaningful or affecting on an emotional level.

I like Cookson, and I’ll be first in line to claim she deserved a heck of a lot better from Matthew Vaughn as far as her return engagement as Roxy in Kingsman: The Golden Circle was concerned. But she’s utilized even worse here, and while the actress is talented, I don’t think anyone at all could have done anything with this character considering the hackneyed way she is presented and the constant belittling she receives for pretty much the whole movie. But that’s only the tip of the iceberg as far as The Crucifixion is concerned, and while Gens remains a cinematic visualist worth keeping tabs on, why he signed on to make a film this condescendingly dogmatic is a question I’ll likely never know the answer to.