It’s possible that Daddy’s Home 2 is one of the more blatantly rancid and painfully ugly comedies I’ve ever had the displeasure to sit through. Doubling down on the more risible aspects of the otherwise inoffensive, moderately amusing yet instantly forgettable 2015 first film, returning director Sean Anders (We’re the Millers) and the rest of his creative team have delivered a sequel that’s pretty close to unwatchable. Trading in disgustingly tired and offensive gender stereotypes that only feel more egregious in light of current cultural events, filled with childish behavior by its two leads that is trite and obnoxious in a way that is not remotely amusing, this film comes amazingly close to being a disaster. It just isn’t good, and for the life of me I can’t begin to imagine just how terrible a third entry in this series would prove to be if this second one ends up being a hit which by all appearances it is sadly almost certain to be. 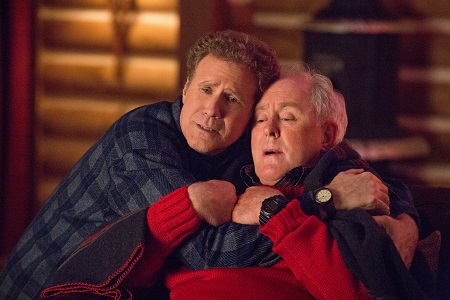 After ironing out their differences and working overtime to be the best pair of co-dads they can be, Brad (Will Ferrell) and Dusty (Mark Wahlberg) have done a fine job becoming the type of men they feel their large cadre of children can be proud of. Both are determined to have the best Christmas celebration ever, deciding that instead of the children having to commute back and forth from one man’s home to the other, the entire clan will make merry together as one gigantic unit. To that end, Brad and Dusty have invited their own fathers, the former’s touchy-feely pop Don (John Lithgow) and the latter’s wild-eyed bad boy of a dad Kurt (Mel Gibson), to be a part of the festivities, the two older gentlemen flying into town to be with their children and grandchildren for the holiday.

Things do not go as planned. Egged on a little by Kurt, Dusty starts trying to prove once again he’s the alpha male. Not wanting to appear intimidated, Brad follows suit. Once again, the two men start trying to one-up one another by being as boorishly masculine as they can be while their children look upon them with a mixture of disgust and embarrassment. Even Brad’s wife Sara (Linda Cardellini) and Dusty’s new bride Karen (Alessandra Ambrosio) are mortified by their behavior, both women quickly coming to their wit’s end as they try to deal with all the chaos and carnage their husbands are leaving in their wake as Christmas Day approaches.

Why do we have yet another comedy where the idea of males being affectionate or showing emotion is supposed to be funny? Why are we playing up so many unctuous gender stereotypes that proclaim anything even slightly feminine is to be looked down upon or ridiculed? Why is it supposed to be cute that forty-something man-children can behave like such bratty imbeciles? Why are the women in this film treated even worse this second time around than they were the first, the immensely talented Cardellini once again forced to deliver thankless bits of dialogue that are as embarrassing as they are juvenile? Why does so much of this movie assume its audience is a bunch of morons who need to be continually pandered to, never allowing for anything to happen that doesn’t feel borrowed or stolen from other popular holiday comedies like National Lampoon’s Christmas Vacation or A Christmas Story?

I’ve always responded to Ferrell and Wahlberg as a comedic team, but they’re really starting to wear out their welcome with this travesty. Their performances grate in a way that grows tiresome as the film progresses. Even for a silly, people-doing-stupid-things-cluelessly comedy, the depths this one descends to are so overtly moronic putting up with either man for all 100 minutes of the running time is practically impossible. They’re both so tediously insufferable their performances almost make me regret giving a good review to The Other Guys and a pleasantly passable one to the first Daddy’s Home. I was that frustrated and dissatisfied by all that I was sitting there witnessing, and if only for the fact I’ve never walked out of a movie it’s a wonder I sat in the theatre all the way until the end. 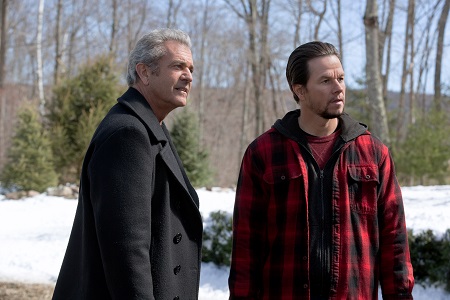 Gibson is arguably the lone bright spot, the only one who underplays his role, refusing to mug for the camera, the actor allowing laughs to spring forth far more organically than they otherwise have any right to. But his appearance in what is being billed as a comedy fit for the whole family brings up a number of additional issues that I haven’t the first clue as the best way to address. He’s a problematic presence inside the motion picture for reasons that have nothing to do with the movie’s overall mediocrity and everything to do with a person’s ability to separate art from the artist, and while I was just fine watching Gibson in recent efforts like Blood Father and The Expendables 3 I’d be lying if I didn’t admit to having a heck of a time trying to feel comfortable with her presence here.

Granted, the movie being so unrelentingly terrible eases that burden somewhat, Anders and his team of screenwriters manufacturing a sequel that isn’t just content to sit at the bottom of the entertainment barrel but actually one that frequently digs even deeper into dirt seemingly in an attempt to see just how low it can go. Daddy’s Home 2 is a lump of seasonal coal delivered into the multiplex with all the pomp and circumstance of a slap to the face, this holiday-themed comedy a laughless slog better left unwatched.