It has been six years since a mysterious virus wiped out most of the world’s population under the age of 18. Since then, in the United States the surviving children have been rounded up and put into militarized detention centers and secluded into various groups based on a simple color system. The reason for this is simple. The surviving kids have developed a variety of astonishing powers ranging from superior intelligence, to the ability to control electricity, to basic telekinesis. These are the Green, Blue and Yellow groups. These are the children the government believes it can try and control. 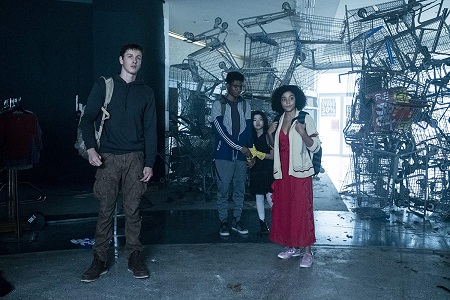 Ruby Daly (Amandla Stenberg) belongs to the Orange group, and kids with either that or the Red designation are executed immediately with no further testing. But she’s managed to hide her abilities for these six long years, waiting for the moment she’ll be able to escape imprisonment and hopefully return home to her mother and father. But when she does get out it is into a world far different than the one she once knew as a 10-year-old little girl. By complete chance she manages to hook up with a trio of fellow youngsters, Liam (Harris Dickinson), Chubs (Skylan Brooks) and Zu (Miya Cech), all of whom are also on the run. Together they are searching for a fabled hiding place filled with kids like them, believing if they can get there they can start a new life outside of the terrors inflicted upon them by the adults petrified of their powerful abilities.

I am not familiar with author Alexandra Bracken’s best-seller The Darkest Minds or the series of Young Adult novels its success helped spawn. I do not know how faithful director Jennifer Yuh Nelson (Kung Fu Panda 2, Kung Fu Panda 3) and screenwriter Chad Hodge’s (“Wayward Pines”) adaptation is in regards to the source material. What I can say with relative confidence is that, unlike films like The Hunger Games and The Maze Runner it is doubtful we’re ever going to see where Ruby’s tale goes next after this chapter comes to an end. It strikes me that for all of this motion picture’s plusses the chances a sequel will see the light of day just isn’t one of them, the nature of the story and the forceful depiction of the violence, primarily directed at children separated forcefully by the government from their shell-shocked parents, not exactly making this dystopian science fiction adventure all that appealing in light of current events dominating the nightly news right this very moment.

Which is kind of a pity, because while the film has its fair share of weaknesses and missteps, the world Nelson and Hodge construct turns out to be an intriguing one, and even though much of this can play out like an X-Men origin story crossed with the doom and gloom of the unfinished Divergent series there’s still enough going on I’d be curious to learn what happens next. It also helps that the cast the filmmakers have assembled of young talent is strong, not the least of which is Stenberg, an actress quickly growing into her abilities who is also no stranger to YA adaptations such as this. Once upon a time she was the ill-fated Rue in the aforementioned The Hunger Games, her powerful death scene one of the more memorable cinematic moments in recent memory.

After her performance here and in last year’s otherwise underwhelming Everything, Everything, it’s safe to say Stenberg is a talent to keep one’s eye on. She’s outstanding as the conflicted Ruby, mining rich emotional terrain with a naturalistic effortlessness that’s sublime. The actress subtly makes this young woman’s transition from protected to protector intimately authentic, and I loved the uneven physicality she brings to the role. There is a fluidity to the ins and outs of what Stenberg is doing that’s marvelous, and be the time she makes the decision to stand up and fight against the evils attempting to destroy both her and her friends I almost wanted to jump out of my seat and join her in doing just that.

If only the movie as a whole was equal to her performance. There’s a lot happening here, and there are a number of instances where Nelson and Hodge can’t seem to juggle all of the various balls they’ve tossed into the air with anything resembling success. This adventure tends to move in fits and starts, glossing over what appear to by major plot points only to give extra weight to others that unfortunately don’t add a heck of lot as far as the overall narrative is concerned. There’s also the fact that, as much potential as this scenario might have, there’s nary a surprise to be found anywhere during the feature’s 105-minute running time, its secrets blatantly apparent throughout, even to audience members only utilizing a tiny smidgen of their available brain cells. 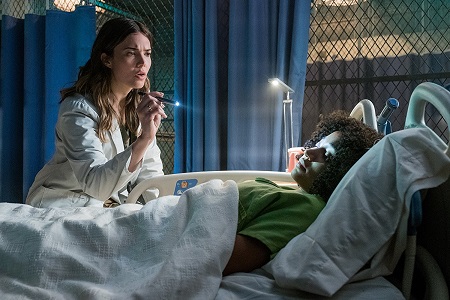 It’s also apparent that the study and the filmmakers were hoping their film would be the start of another popular YA fantasy series, ending things on a cliffhanger that, while not as annoying as the one in that first Maze Runner or 2009’s Cirque du Freak: The Vampire’s Assistant proved to be, is still rather obnoxious and unsatisfactory. By insisting on setting up Ruby’s next adventures Nelson and Hodge inadvertently undercut the emotional strengths much of this story utilizes as its foundation, and even an outstanding scene between Stenberg and Dickinson right near the end finds its power and humanistic messaging significantly undercut by the lack of anything resembling a coherent resolution a precious few moments later.

I still can’t wait to see what Stenberg does next, and early buzz is that her performance in George Tillman, Jr.’s upcoming, highly anticipated drama The Hate U Give is going to be the one that potentially makes her an outright star. There’s also something to be said of Nelson’s jump from animation to live action, her ability to utilize the entire frame, especially during action sequences, coupled with her confident handling of actors getting me to hope she gets her next directorial gig sooner rather than later. There’s a lot to applaud about The Darkest Minds, just not enough to believe audiences will give it the type of look it is going to need to need for 20th Century Fox to continue to adapt Bracken’s books anytime in the immediate future.