On the eve of its demolition, Madison (Tara Holt) returns to the home of her youth, the scene of a horrifying tragedy. She is joined by her boyfriend Jake (Bryce Johnson) and her cousin Izzy (Katrina Law), the three of them breaking in late at night in order not to be noticed by any next door neighbors. Madison isn’t sure why she needed to return, she just knew she needed to visit before the house was razed, almost as if some unseen force was drawing her there, a mysterious entity determined to finish what it started all those years prior. 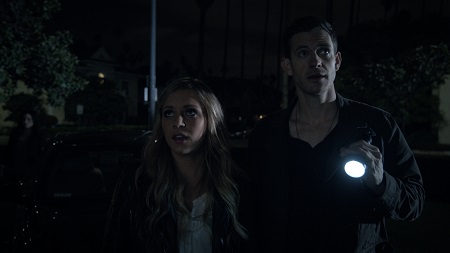 Darkness Rising is as cryptic yet also as rudimentary a haunted house thriller as any lesser B-horror tale I’ve likely ever seen. Madison, Jake and Izzy are in for a rather typical night of scares and bloodshed, the ghostly force that led the young woman’s mother to murder the rest of her immediate family now ready to finish the job while the house it patiently resides in still stands. So it plays with the three young adults, menacing them psychologically and physically, everything building up to the big payoff where getting out of the house in one piece is likely impossible and the line between life and death vanishes almost entirely.

It’s all fairly paint-by-numbers, director Austin Reading and writer Vikram Weet (Devil’s Pass) not exactly breaking the supernatural rule book as things work towards their rather overly familiar climax. There’s a lot of screaming, we get some evil dogs guarding all the exits, people get bonked on the head and a victim or two might even find themselves possessed by an ancient evil looking to do serious damage. At the center of it all is Madison and what she means to the entity, her return the obtusely ephemeral last piece of a nonsensical puzzle that turns out not be all that worthy of being put together.

The problem is that Reading can’t ever develop a reason to care about any of the characters. We don’t get to know them well enough, each just a standard horror archetype thrown into a meat grinder before they’ve had a chance to establish who they are, making it impossible to care if a single member of the trio makes it out alive. Johnson and Law, both of whom do not do much more than look scared or make a snarky comment, are particularly unremarkable through no fault of their own, Weet’s script doing nothing with them that could be construed as unique or worthwhile. As for Holt, I could never make out how I was supposed to feel about her character, Madison seeming to be under some sort of trance long before she even steps foot inside the house. While the actress does what she can, there were precious few instances where I actually cared about what was going to happen to her, making the events that transpired during the last third far less interesting than they by any rights should have been. 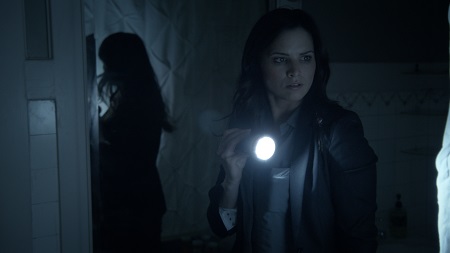 Not that it’s a total loss. The film is nicely shot by Adam Biggs, and some of the stuff involving the aggressively psychotic dog keeping everyone trapped in the house is gruesomely effective. I’ll also say some of the flashbacks detailing what happened to Madison’s family the first time the presence inside the house went berserk are pretty decent, and it’s not until there are suddenly way too many of them that they begin to lose their potency.

None of which makes Darkness Rising worthwhile. It’s too tame, too unoriginal and far too forgettable, none of the three characters at the center of all this ghostly chaos worth caring about as they attempt to survive the night. While there’s no reason to hate this effort, I can’t say there’s any reason to like it, either, and like a ghost in the night transitioning into the unknown by the time I finish writing this review it’s highly likely this film will have dissipated from my memory altogether.