One of the notable features playing during this year’s Seattle International Film Festival was A Fantastic Woman director Sebastián Lelio’s magnificent drama Disobedience starring Rachel Weisz, Rachel McAdams and Alessandro Nivola. Based on Naomi Alderman’s masterful best-selling novel, the film tells the story of Ronit Krushka (Weisz), a New York photographer who returns to England when she receives a phone call saying that her elderly Orthodox Jewish father has died. Once back home, former acquaintances and family members welcome her back warily, their reasons for doing so ones they do not want to speak out loud about. Only old friends, both now married to one another, Dovid (Nivola) and Esti (McAdams), seem to be pleased by her return, the trio reconnecting for the first time since Ronit left their community and headed to the United States.

The movie is a remarkably insightful look at faith, family, friendship, gender, feminism and sexuality that builds slowly to an explosively emotional conclusion. All three actors are stunning, most notably a practically unrecognizable McAdams, Esti’s transformation both the most drastic as well as the most authentically heart-wrenching as the story progresses to its tearfully insightful climax.

I had the pleasure to briefly chat with Lelio about his English language debut. Here are some of the highlights from that conversation:

Sara Michelle Fetters: Naomi Alderman’s novel, how did that come to you? What was it that drew you to the story?

Sebastián Lelio: You know I made a film called Gloria, and Rachel Weisz and her partner Frieda Torresblanco, they saw the film and somehow they thought that I could be the right person to direct this adaptation of Naomi’s novel.  So that’s how I got involved, through Rachel who had the rights of the film. So I picked up the book and I loved it. And then the idea of working with Rachel Wiesz was a big factor that made me say yes.

Sara Michelle Fetters: For you and your co-writer, Rebecca Lenkiewicz, how did you attack the book in order to make it feel cinematic? There’s so much that’s in the book about the minutia of living in that orthodox community that isn’t distinctly cinematic. Yet somehow you made me feel like I was right there with Rachel McAdams and Alessandro Nivola, living with them. I didn’t need all of that extra stuff that’s in the book. How did you two figure that out? 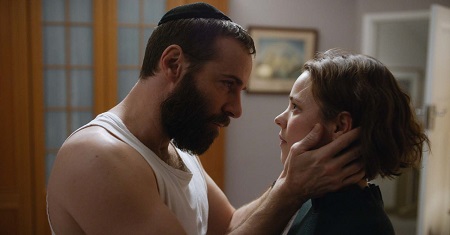 Sebastián Lelio: It was interesting. It was the first time I was working an adaptation, so for me it was a new challenge apart from working in English for the first time. And I’m not Jewish. And I’m not British. So I was pretty much paralyzed at the beginning of the process, I must confess. But then I just connected with [the characters] on a human level. I looked at them as human beings and that was my way of accessing the story. We were working with several consultants during the writing process in order to capture the cultural texture right. Then during the pre-production and shooting process the amount of consultants or advisors increased by more than ten because we were really obsessed with getting it right. After overcoming all of that I really concentrated on what I care about the most, which is the people we are portraying, the human beings, the characters; I want to know who these people are.

Sara Michelle Fetters: I love that you bring that up because, and maybe this helped because of your status as an outsider coming into this story and this world from a different perspective, is that you’re able to showcase Ronit in a way where she’s not quite an outsider, but still feels like one. She isn’t part of this community anymore and it gives things sort of an uncomfortable edge because you know there’s going be a shoe to drop at some point.

Sebastián Lelio: Well, in a certain way we are Ronit’s spectators, because the secular spectator can relate to her for so many reasons. She’s a modern woman living a relatively open life and she feels confident and alive. She’s the one that brings us to this unknown world, to this secretive world, to this Land of Oz, if you want. And that’s part of the narrative strategy of the film. We go with her and then suddenly the narrative lines expand up to three. Then it’s not only Ronit, but it’s also Esti, Rachel McAdam’s character, and Dovid, Alessandro’s Nivola’s character, the ones that we will observe from that point on. It’s more or less like a rock music piece. You start with one line, then you add a second one, then a third one. Sometimes only two of [the characters] are together, but maybe all three of them are coexisting at the same time, creating a beautiful melody. And then we go back to only Ronit. It’s a song.

We enjoyed that immensely with Rebecca in the writing process. I really love working with actors and trying to capture something with the camera that is somewhere in the intersection between the character and the human being that is interpreting them is bringing to the equation. All of those things combined helped to generate the feeling that we are there, that we are watching not characters, but people that inhabit those spaces. They are real.

Sara Michelle Fetters: Reading the book before watching the movie, I was so worried that somehow Dovid was going to turn into some sort of villainous character. Thankfully, he is just as human and just as humanely treated as you treat Esti and Ronit. That’s wonderful. 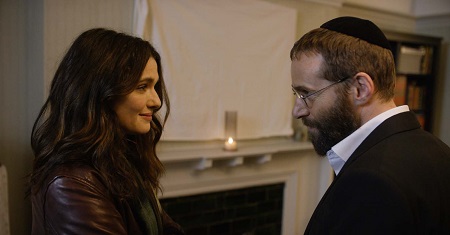 Sebastián Lelio: For me this is a triangular story, even though the two women are probably stronger because that’s where the main forbidden love is taken place. But for me, I’ve always seen Ronit, Estie and Dovid as one entity. They’re like one multidimensional being, if you want. I mean they have been living together for so long, they’ve known each other since they were kids. One of them escaped and in some eyes she betrayed them. To her eyes, she saved herself. But whatever happened, they are united, they are destined.

I always loved that element. I really enjoyed that with Rebecca and me in the writing process, and then later on while directing and trying to create this journey in which the structure makes you a little bit lost. You don’t really know in which direction things are going until probably halfway through the film when the two women kiss. After that, you have no idea how things will unfold. It’s really interesting that the climax of the film is taken by the third point of the triangle, by Dovid.

Sara Michelle Fetters: Going back to those two women for a second, the two Rachels, they are just extraordinary. What was that like for you as a director, just watching them work together in such tandem? I can’t imagine this movie without either of them.

Sebastián Lelio: That’s the thing, they complement one another. I had a strong feeling that they would be amazing together, and beautiful and a strange, just this beautiful, electrical, explosive, sensual combination. I just feel so grateful that Rachel McAdams accepted this challenge. I think it’s so interesting to see her operating in this register, going through the entire emotional spectrum with such elegance and grace and depth. I always knew that they were going to be great. I met them both for the first time once in Canada. I was sitting there when Rachel McAdams and then Rachel Weisz came into the room. When I saw her walking in and sitting down, and they said hello to each other, I was like, this is going to be great! They are just similar and different at the same time. They are both great actresses and so magnetic, you cannot take your eyes off them. I don’t know, I just couldn’t wait to start. That was my feeling. I was like a kid.

Sara Michelle Fetters: I promised I would keep this short. As much as I want to go crazy about A Fantastic Woman and tell you how much that film means to me and how extraordinary it is, sadly I’m going to have to hold off. I’m just going to ask you two more questions, if that’s all right. The first one, I look at Gloria, I look at A Fantastic Woman, I look at this movieI feel like they are almost a trilogy, these stories of these strong, complex, creative women. I do wonder, what is it that draws you to these type of women? 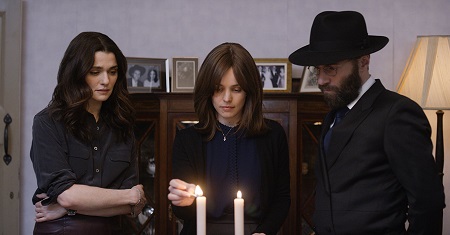 Sebastián Lelio: Oh, thank you. Thank you for saying that, about A Fantastic Woman. I appreciate it.

To your question, profound emotion. Profound connection. It’s not part of a strategy or an agenda. I’ve been following my intuition, and there’s something about paying attention to these women that are somehow on the fringes of society and put them in the absolute center and try to create this hopefully complex portrait. And then to see them fall and stand up again, and finding the tools to move on to the next level. There’s something about that gesture that touches me, that moves me. The idea of making those films generates enough energy within me. I mean so much energy was in me making these film that I know it’s right to tell these stories. I am the one moved in the first place.

Sara Michelle Fetters: Finally, at the end of the day, what do you want people talking about after they watch Disobedience? What do you hope they’re saying?

Sebastián Lelio: Hopefully that they went through a strong cinematic journey. That they lived an experience. More than watching a film, they were confronted to an experience, an experience that says your life is whatever you want. We’re free to choose, as the film says. It’s my duty to provide an experience. There’s something beautiful behind the idea of disobedience, especially in current times. Sometimes disobedience is duty, otherwise we would still be in the Middle Ages.