When New York artist and photographer Ronit Krushka (Rachel Weisz) receives news that her Orthodox Jewish father (Anton Lesser) died she’s understandably shaken by the news. A beloved figure in the London Jewish community, his relationship with his only daughter was sadly not without its travails. Nonetheless, Ronit is compelled to journey across the Atlantic and return home for his funeral, wanting to pay her last respects as best she can. 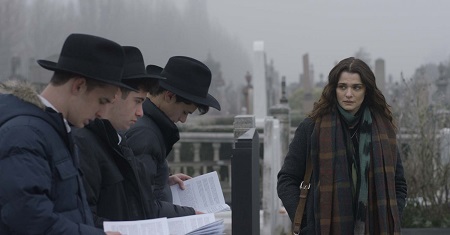 Once there she is quickly welcomed into the home of childhood friend Dovid Kuperman (Alessandro Nivola). As Rav’s most talented student, he’s been tasked by the Jewish elders to take his place at the top of their hierarchy, a turn of events that’s hardly surprising as far as Ronit is concerned. What she does find shocking is that Dovid has married another of her friends, Esti (Rachel McAdams). The three of them were inseparable as kids, getting into all kinds of mischief that many of the adults around them couldn’t help but frown upon. But there was more to the two women’s relationship than most knew about it, what the two of them did together leading directly to Ronit leaving for the United States and the eventual estrangement between herself and her father.

Based on the novel by Naomi Alderman, Disobedience is the first English language film from A Fantastic Woman Oscar-winner Sebastián Lelio. Co-writing the script with Rebecca Lenkiewicz (Ida), Lelio has crafted a masterfully composed drama that is an invigorating examination of friendship, faith, sexuality and longing that grows in emotional majesty as things progress. There is a deep form of conflicted, pent-up sadness that permeates things that deeply evocative, things slowly morphing into an aura of healing and understanding that crosses religious, societal and gender lines. Concepts of forgiveness and freedom are discussed matter-of-factly and without melodramatic embellishment, all of which allows the film to ascend to a shattering plateau that left me both shaken and inspired almost in equal measure.

What is interesting is that even though the story is seen almost entirely from Ronit’s point-of-view, ultimately this film becomes more about Esti than it does anything else. Her choices, her life experiences, what she has chosen to go through by staying inside the religious community, all of this and more subtly and delicately eventually comes into play. Esti has gone through a metaphorical meat grinder trying to do what she was told was best. In the process she has dismantled core parts of what made her who she once was as a younger woman, and even though Dovid loves her desperately and only wants what is best for his wife, even he has trouble understanding just exactly the full extent of the emotional toll their time together has inflicted upon her.

All three actors are extraordinary. Weisz, unsurprisingly, is her typically controlled self, revealing minute layers of Ronit’s persona as things go on with a deftly gritty gracefulness that’s astounding. Nivola, an underrated a character actor who has been giving terrific performances for almost two decades now, is even better. The final sections of the film belong almost entirely to him. Where a lesser actor would have chewed the scenery by giving a broad, boisterous performance in order to make sure audiences wouldn’t be able to miss all his character was going through, Nivola takes the opposite track. In the process, his lived-in subtlety proves to be eviscerating, leading to a revelation of truthful, understated majesty that had me wiping away tears I didn’t even realize were there until they were dripping off of the side of my face. 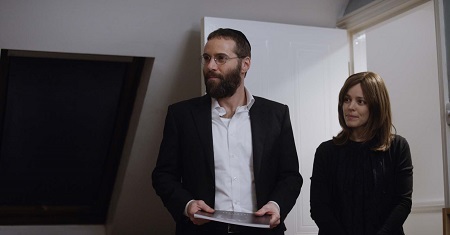 But make no mistake, this is McAdams show almost from the first second she walks into the frame. This slow-burn of a performance is an undeniable stunner, the way the actress builds her character with such exacting specificity astonishing. As stated, Esti ends up being the heart and soul of this piece, and while the eventual revelations involving her aren’t exactly surprising, the way McAdams chooses to unveil them continually is. Her initial fragile physicality slowly hardens into a stoic resolve that greatly moved me, and as such the character’s quest to live her life free of the constraints she has allowed others to bind her down with feels downright heroic.

Unlike A Fantastic Woman or Gloria, there are moments of heavy-handedness here that do feel a tiny bit forced, Lelio telegraphing a small handful of emotional beats in ways that are noticeably obvious. The film is also far more direct about what is going on and what the outcome is going to be then it has been in his prior motion pictures. Even with that being the case, I can’t say almost any of this bothered me because the core dramatic components are so fascinatingly strong and dynamic, so truthfully authentic, a few little narrative hiccups here and there ended up feeling so minor I practically forgot about them entirely as I walked out of the theatre. Disobedience is a sensational motion picture I can’t wait to watch again, its pleas for tolerance, freedom, friendship and family all ones deserving to be heard now more than ever.