French Special Forces operative Vincent (Matthias Schoenaerts) is going through the long, painful process of attempting to be reinstated to active duty. The reason for the delay stems from recurrent headaches and mood swings due to a diagnosed Post-Traumatic Stress Disorder (PTSD), and as such it’s no surprise military psychologists are reticent to put him back in the field no matter how strong his qualifications might be. To stay sharp, Vincent takes part-time work as a team member on protection details for wealthy clients, the drudgery of these assignments forcing him to maintain focus and strive to get his mental faculties back to full capacity. 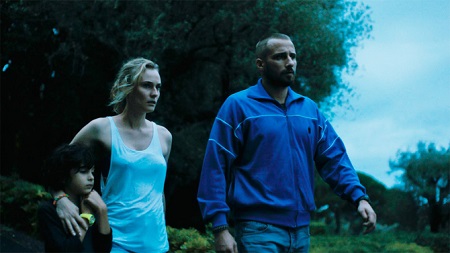 After a one-night gig running security for Lebanese businessman Imad Whalid (Percy Kemp) goes well, the soldier is asked to stay on for an additional week protecting the man’s beautiful wife, Diane (Diane Kruger), and their young son, Ali (Zaid Errougui-Demonsant), while he is out of town. As the days pass, Vincent finds he is having trouble staying focused, feelings of paranoia becoming more obvious as time goes on. But he doesn’t know if these feelings are a byproduct of his PTSD, or are in fact premonitions of an actual threat coming Diane and Ali’s way.

Alice Winocour’s (Augustine) sly, seductively enthralling Disorder is rarely the psychological action-thriller I expected it to be. Co-written with Jean-Stéphane Bron (The Big Wedding), this is a smart, elegantly constructed character study seen entirely through the eyes of a decorated, self-sufficient soldier who has returned to the home country a somewhat broken man having difficulty separating fact from fiction. His wounds run deep, yet he still feels compelled to do the only job he has ever known, finding a way to put pieces together even when the puzzle itself remains elusively nondescript.

While Winocour and Bron can’t escape every cliché, the pair seem completely disinterested in following a traditional path. Instead, they look at the mechanics as to how returning veterans are treated by the world, the way not only an unsuspecting civilian populace views them, but also by those entrusted to supervise their physical and mental well-being. It’s a searing indictment, one that cuts through cultural differences to become incisively universal, Vincent essentially forced to fend for himself as he attempts to return to health without concrete aid from those with the most resources to help him.

It’s up to Schoenaerts to embody this, the Rust and Bone, Bullhead and Far from the Madding Crowd actor more than up to the task. This is a magnetic, deeply felt performance, one that mines a number of ephemeral territories that can only be explored through facial expression and body movement, not via dialogue. He digs deep, every jitter and tick a reminder of how terrible the forces he faced abroad had to have been. Yet, Schoenaerts’ eyes, the way he tracks his prey, how he observes each and every situation, it all hints of a man who is fully confident he can pierce through the fog and still differentiate friend from foe. It’s a fascinating turn, and as such I was never in doubt Vincent would be able to get the job done no matter what obstacle ended up being placed in his path.

By the nature of the scenario Winocour and Bron have crafted, Kruger is forced to observe and react to what is going on more than she is anything else, a scene between her and Schoenaerts late in the proceedings dripping in motherly concern and interior pain. It is here that Diane comes to the realization that the danger she suspected was only in Vincent’s head might be genuine, and as it does it puts into brutal perspective just how brittle a foundation her relationship with husband Imad is proving to be. The movie is a strong reminder of how good the Inglourious Basterds and Farewell, My Queen actress can be when given a role that challenges her, Kruger having a shrewd knack to make even the more melodramatic conventions feel bracingly authentic when she wants to.

As wonderful as all this is, it should be noted that there aren’t a ton of surprises, Winocour and Bron not particularly interested in the thriller aspects of their story. While there is a refreshing refusal to bow to convention as far as the identity of the villains are concerned, whether or not Vincent’s increasing paranoia is justified is never in doubt. Things also come to a rather sudden conclusion, one that’s wrapped up a little too nicely, the emotional payoff, as good as it might be, still not nearly as immense as I honestly thought it would be. 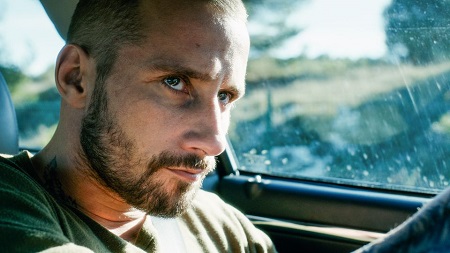 But Winocour stages scenes of slam-bang violence with confidence, a confrontation inside and around Diane’s car punching me in the gut while it at the same time it also stomped on my foot and delivered a swift kick to my face. There is a documentary-like exactitude to the framing and cutting of this scene that is inspired, cinematographer Georges Lechaptois (Americano) and editor Julien Lacheray (Girlhood) both showcasing their skills with aplomb. The sound design is aces, as is Mike Lévy’s (otherwise known as Gesaffelstein) intriguingly disconcerting score.

It all allows the film to have an eerie, old school noir aesthetic that’s reminiscent of Fritz Lang coupled with the psychologically destructive emotional pathos of Claude Chabrol. Yet Winocour manages to make things feel unique, her film consistently having more on its mind than the delivery of a few cheap thrills. With Schoenaerts’ marvelous performance doing much of the heavy lifting, the director continues to make a name for herself as a fearless provocateur, taking a seemingly obvious story and transforming it into something imaginative and thought-provoking. Disorder is a powerhouse of dramatic tension, the film a deeply human journey of perseverance and catharsis I almost didn’t want to see come to an end.