In May of 1940, German forces pushed roughly 400,000 British, French, Belgian and Canadian troops onto the beaches of Dunkirk in France. Large naval vessels that could be utilized to rescue the men could not dock at the shallow-drafted beach. German U-Boats patrolled the waters sinking everything they came into contact with. German planes controlled the sky, randomly strafing the beach while dropping bombs on the few ships that could be utilized for mass evacuations. Only 26 miles away from the English coast, survival for these soldiers felt nothing short of impossible, fear and paranoia gripping hold of even the stoutest heart as this realization started to sink in.

Written and directed by Christopher Nolan, Dunkirk might be a masterpiece. Told in three intercutting pieces depicting the fight for survival on the land, on the sea and in the air, the movie tackles this important piece of WWII history with an intimate eye for detail. Yet it is the human drama that makes this film extraordinary, the filmmaker tapping into the fear, resilience, heroism, paranoia and sacrifice that was an integral part of this massive rescue operation. Unrelentingly tense from the very first scene, building its myriad of layers with tenacity and focus, featuring a crackerjack cast filled with veteran British character actors and a bevy fresh-faced newcomers, I was enthralled by Nolan’s latest in ways I’m still barely able to process let alone talk about, this movie nothing less than an absolute marvel.

The two core stories couldn’t be more different. One involves the captain of the Moonstone, Mr. Dawson (Mark Rylance), a British sailor who, along with countless other small boats and their crews, makes the trek to Dunkirk after their assistance is asked for. He is joined by his son Peter (Tom Glynn-Carney) and family friend George (Barry Keoghan), the two teenage boys feeling it is their duty to assist no matter what the danger.

The other involves British soldier Tommy (Fionn Whitehead), trying to do whatever he can to get off the beach before the German’s can massacre everyone at Dunkirk. He attempts to get on an escaping vessel as a stretcher bearer, overhears the naval officer in charge Commander Bolton (Kenneth Branagh) discuss their meager prospects with his trusted second Colonel Winnant (James D’Arcy) and finally ends up on a different ship only to see it attacked by a U-Boat, in the end choosing to hold up with a number of fellow soldiers in an abandoned Dutch merchant vessel waiting for the tide to come in so they can all hopefully drift out to see unnoticed by the Germans. 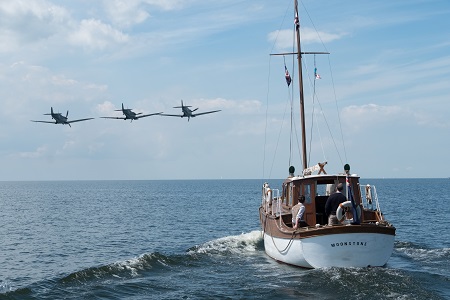 The third part of this triptych is a little more ephemeral than its counterparts, yet it is no less important. It is the battle going on in the air, most notably how it involves a pair of British Spitfire pilots, Farrier (Tom Hardy) and Collins (Jack Lowden), both low on fuel and outnumbered yet each still determined to stop as many German bombers from releasing their payloads on escaping ships as they can. Their dogfights are ferociously angelic interludes of carnage and beauty, the quiet peacefulness of the world above the clouds frequently shattered by the roar of a German aircraft engine and the piercing crackle of machine gun fire.

Nolan wraps these stories into one, focusing the majority of his energies on the journey of the Moonstone and its tiny crew as well as Tommy’s attempts to get off the beach. He then intercuts the happenings going on with the Spitfires, showing how all three facets of the battle crisply mingle together, creating a mesmerizing tableau of survival and sacrifice that is as heartbreaking as it is without pity. The director showcases all facets of the emotional spectrum no matter what they might be, never pulling punches as heroes meet senselessly tragic ends, cowards are saved from certain death and those just doing their jobs as best they can as hellfire shatters the calm around them are treated with the dignity and respect they deserve.

It’s difficult not to think that this monumental undertaking of Nolan’s would not have been possible without him first honing his narrative and visual style on motion pictures like Memento, The Prestige, Inception and Interstellar. In retrospect, each one of those features were obvious building blocks for what he is attempting to do here. The way Nolan utilizes time, how he assembles each of its three overlapping stories into one singular saga, it’s likely none of it would be on such vibrant display if he hadn’t made those preceding films first. It’s awe-inspiring, the technical and creative virtuosity frankly stunning.

But like Terrence Malick’s 1998 masterpiece The Thin Red Line, for all the astonishing sights and sounds, for all the ways he manufactures suspense that snaps the spine and sends the heart into uncontrolled palpitations, Nolan never loses sight of the human drama. These soldiers, whether they be the fighter pilots in the sky, the civilians piloting those boats rushing to the French beach or the soldiers themselves huddled on Dunkirk’s shores waiting for the end to come, all of them matter. Their pain, their fears, their apprehensions, it’s all here. But so, at the same time, is their resilience, their willingness to give as much of themselves as they can in order to see others rescued. Even with so many characters vying for screen time, Nolan makes us understand exactly what it is that is at stake and what accomplishing this task will mean for all involved, making this an authentically passionate WWII drama where spectacle and emotion walk in constant tandem. 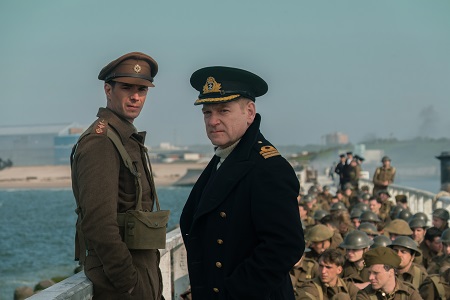 As to that spectacle, not since James Cameron’s Titanic has the horrifying sight of ships sinking into the sea with all passengers still aboard felt so visceral. Not since classic Hollywood epics of yore, films like Patton, Tora! Tora! Tora!, The Longest Day or Battle of Britain, have the mechanics and machinery of combat utilized during WWII felt so tactile and concrete. Eschewing digital effects wherever possible, going the practical route more often than not, utilizing real planes, real ships and, most importantly, real actors and extras whenever he can, Nolan’s story overflows in realistic detail, all of it propelled forward by composer Hans Zimmer’s (Hidden Figures) devastatingly evocative score.

There’s no way to know for certain if Nolan’s latest will stand the test of time be thought of in the same breath as WWII classics like Battleground, Patton, Das Boot or The Thin Red Line. There’s no knowing if it will hold up to scrutiny when watched again, or if it will have the same sort of powerful resonance outside of a theatrical presentation. What I do know is that Dunkirk feels at first blush like an all-timer, and I have difficulty believing that initial assessment is going to change on my part anytime soon. This is a magnificent achievement accomplished with staggering buoyancy and grace, the victory of survival its own form of heroism worthy of celebration.