Something isn’t right. At least, that’s what 10-year-old Nicolas (Max Brebant) is starting to believe. Why does his mother (Julie-Marie Parmentier) insist the dead boy he saw buried in the seabed while he was out swimming was only a figment of his imagination? Why is that that the only other children in his small seaside community are males of roughly the same age? Why do they all live with single mothers, all of whom dress, do their hair and act almost identically? Why do all the kids have to spend time in the hospital, being treated for a mysterious ailment even though none of them appear to be sick? These questions and more trouble Nicolas, and matter what the danger he’s determined to see as many of them answered as possible.

Evolution is as beautiful as it is terrible, as specific as it is ephemeral, this haunting, picturesque psychological and allegorical puzzle box a genetic science fiction marvel that refuses to follow anything close to resembling a familiar path. The long-awaited return of Innocence auteur Lucile Hadzihalilovic, the talented writer/director taking over a decade to follow up her 2004 sensation with a new feature-length project, this movie is a seriously compelling work of art, its final moments so evocative I found myself thinking about them for days after my initial viewing.

Working with co-writer Alante Kavaite (The Summer of Sangaile), the filmmaker has crafted an intimate epic of transition, resilience, gender, family and identity that sets as unique a course as anything I’ve seen this entire year. Hadzihalilovic takes her time, the pace she sets for the narrative highly measured from start to finish, instead focusing almost entirely on seeing this strange, surreal world through Nicolas’ eyes and practically no one else’s. His discoveries were my discoveries, the answers to the questions he was asking ones I was equally eager to have resolved.

It is almost too vaporous and vague, Hadzihalilovic playing things so close to the vest she might as well admit she’s making some sort of psychological pseudo-horror prototype for those who think Terrence Malick hasn’t been obtuse enough with his last couple of theologically questioning melodramas. When a sympathetic nurse, Stella (Roxane Duran), enters the picture, figuring out why she is drawn to Nicolas isn’t just difficult, it’s near impossible, and as such there was something of an emotional distancing between myself and the movie that was difficult to get beyond. 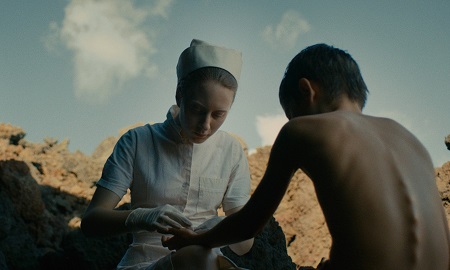 Difficult, but not impossible and, more importantly, well worthy of the effort of overcoming. The creepy, unsettling dreamlike atmosphere Hadzihalilovic manufactures got under my skin, and seeing Nicolas navigate his way through the surrealistic enigmas confronting him is consistently fascinating. Aided considerably by Manuel Dacosse’s (Amer) hypnotic cinematography, the gracefulness of the images as they are choreographed against the actions of the characters only grows in power and tension as events progress. This is a movie to savor, to luxuriate within, to be confounded, perplexed, intrigued and revolted by, it’s elegantly unsavory movements latching hold like a succubus ready to drain every ounce of blood right out of the viewer’s veins.

I’m not certain I picked up on everything that Hadzihalilovic was investigating. Heck, I’m almost positive I didn’t grasp at least of half of what was going on, maybe more than that. But what is here, how it is explored, I can’t get it a single second of it out of my head. How Evolution transitions from its humbly mysterious initial sequences to its quietly disquieting final seconds, that’s its real glory, and the fact Hadzihalilovic can weave such an uncomforting spell as magnificent as this is cause for instant celebration.