At the wedding of their mother Helen (Glenn Close) to kindly gentleman Gene (Harry Shearer), fraternal twin brothers Peter (Ed Helms), a surgeon who focuses on colon cancer, and Kyle (Owen Wilson), a easygoing slacker who lives in Hawaii with his pregnant girlfriend Kaylani (Jessica Gomes), inadvertently discover they’ve been told a lie their entire lives. Turns out, their dad didn’t die of cancer before they were born. Even worse, as far as Helen knows the man still might be alive. Truth of the matter is that she isn’t exactly sure who their father is, and the only thing she’ll tell them about her past is that she was dating none other than Pittsburgh Steelers great Terry Bradshaw around the time the pair were conceived. 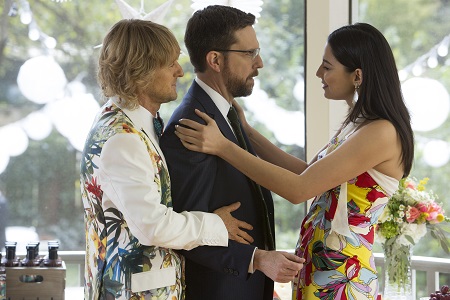 With his life in a rut, Peter is determined to head to Florida, track down Bradshaw and learn whether or not the Hall of Fame football player is in fact his dad. Eager to support his brother, Kyle decides to join him, the two hitting the road eager to learn the truth. But things take one incredible turn after another, and soon the pair are traversing the country tracking down a variety of likely suspects including a former investment banker (J.K. Simmons), a retired undercover police detective (Jack Mcgee) a kindly small town veterinarian (Christopher Walken) all of whom might be their long-lost father. Along the way Peter and Kyle will discover why they’ve grown apart over the years as well as encounter a number of intriguing potential new friends, including an oddly depressed woman drinking away her sorrows in a bar (Katie Aselton) and a perceptively inquisitive hitchhiker (Katt Williams) claiming to be trying to get home to his wife and children, learning answers to a number of universal questions while out on the road.

Father Figures is an oddly ambitious road trip comedy. While the trailers have gone out of their way to make this movie look like a cheap gross-out comedy of errors, missed opportunity and mistaken identity, this actually ends up being something an intriguingly self-reflective story of family, brotherhood and regret that’s kind of fascinating. There are a number of good ideas hiding inside Justin Malen’s (Office Christmas Party) screenplay, The Hangover cinematographer turned director Lawrence Sher handling things with a level of honest emotional directness that’s hugely surprising.

If only all of that would have actually made the movie good. Sadly, as hard as everyone involved tries, as solid as the efforts of the cast and crew might be, this overlong dramatic comedy is frustrating in the extreme, making sitting through things all the way to the end annoying difficult. Malen’s script undercuts almost all of its best ideas with moments of cheerless cruelty and half-baked melodramatic schmaltz that grows increasingly tiresome as things progress. For every good scene there’s a subsequent three or four that follow it that are almost impossible to watch without squirming, the entire subplot featuring Williams, who is admittedly terrific, so off-putting and racially insensitive one would almost think the moment was taking place in 1967 and not 2017. 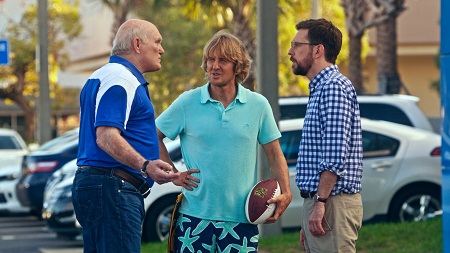 But the real problem is that, other than a few random moments here and there, this comedy just isn’t funny. While Helms and Wilson make an engaging twosome (even if they’re not exactly believable as twins, even fraternal ones), and even though Close has one killer scene near the end where the truth is revealed. There’s so much dead air here it doesn’t matter that Malen and Sher are reaching for more than the basic synopsis hints at or that they’ve populated their films with a number of incredible character actors and intriguing personalities. Things just don’t hold together, the slapdash quality to each of the vignettes Peter and Kyle find themselves involved with oftentimes feeling completely disassociated from any of the ones that preceded it. The subplot concerning Simmons is particularly loathsome, the great June Squibb left completely out to dry portraying a character who’s frustratingly never allowed to make the sort of mark I kept hoping she would.

I’m not kidding when I say I honestly respect Father Figures for what it is attempting to do, subverting convention and expectation as it brings this pair of squabbling full circle in their pursuit to learn that family is what you make it and that home truly is where the heart is. Malen and Sher want their film to be more than the sum of its parts, allowing Helms and Wilson a great deal of freedom as they attempt to make these characters their own and infuse things with a down to earth emotionalism the audience might hopefully respond to. But none of the pieces comfortably fir with any of the ones that sit alongside of them. Worse, it’s just didn’t make me laugh, and for a holiday comedy that just might be the most unfortunate misstep of them all.