It is the 18th century. England is in the middle of a costly war with France. An ailing Queen Anne (Olivia Colman) sits upon the throne, her friend and confidant Lady Sarah Churchill (Rachel Weisz) for all intents and purposes governs the country in her stead. Feeling a moment of compassion, Lady Sarah brings her estranged distant relative Abigail Masham (Emma Stone), a former Lady herself, into her and the Queen’s employment as a housemaid. She feels sorry for the downtrodden young woman, and whether purposefully or by accident she begins serendipitously teaching her tricks of the political trade. 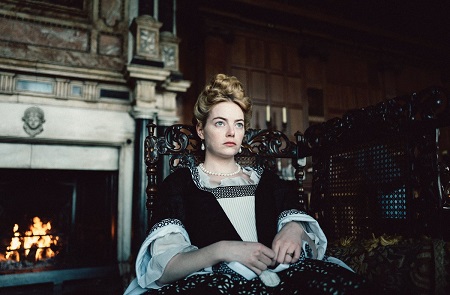 Abigail proves to be a quick study. Soon she’s bedding the dashing Lord Masham (Joe Alwyn) and making clandestine deals with the scheming minority party leader Lord Harley (Nicholas Hoult). More, she’s charmed Queen Anne, slowly worming her way into the monarch’s heart in hopes of replacing Lady Sarah as her most trusted confidant. It’s a crazy time overflowing in palace intrigue where backstabbing isn’t so much unexpected as it is a preordained rite of passage, all three women attempting to manipulate the other two in order to obtain whatever they think it is their heart currently desires.

Not going to mince words: I’m in love with idiosyncratic director Yorgos Lanthimos’ mind-bending historical drama-comedy-thriller-satire-political commentary oddity The Favourite. The movie is an amoeba. It is constantly shifting and transforming, mutating itself as it moves towards it guttural wallop of a conclusion with a forcefully cathartic effortlessness that’s stupendous. I found myself wanting to live inside each and every frame of this marvelous achievement, this intoxicating smorgasbord of whimsy, solemnity and ridiculousness a luxurious cataclysm of low-brow high-art that’s practically unlike anything else I’ve seen in 2018.

Deborah Davis and Tony McNamara’s script is a revelation. It uses history as its starting point and then decides to dig even deeper as it pertains to the complex psychology of its trio of female characters. This allows Colman, Weisz and Stone the freedom to mine a plethora of emotional nuances, Queen Anne, Lady Sarah and up-and-comer Abigail each the hero, villain and pawn of this story depending on the individual moment, sometimes even a melding of all three archetypes at the exact same time. Each actor appears to be relishing the opportunity that’s been gifted them, all shredding their respective performances with an electrifying spontaneity that’s a continuous surprise.

I can’t say any of them are better or more memorable here than any of the others also prove to be. Colman’s work is more introspectively complicated than it initially appears. Queen Anne isn’t quite the overly eccentric flibbertigibbet she comes across as. She’s battling intense physical pain, but her mental faculties aren’t nearly as diluted or as in disrepair as some around her assume. Colman explodes into rage at a moment’s notice but can just as quickly devolve into a puddle of depression only to suddenly snap into expressions of motherly concern that are comforting and sincere.

Weisz is equally dexterous in regards to her performance. Initially Lady Sarah shows herself to be the most devilishly manipulative character in the film. She can conspire and connive with the best of them. But she just as equally feels genuine compassion for Abigail when she hears her tale of woe. More importantly, she also cares for Queen Anne and cherishes her friendship, refusing to sugar coat or lie to the monarch even if telling the truth might initially hurt the woman’s feelings. Weisz brings all of this to life with zestful relish, and even when Lady Sarah is knocked back mouth agape by Abigail’s growing Machiavellian aptitude the character still remains a stoic paragon of resilience and fortitude that the Oscar-winning actress embodies with lithe elasticity.

Then there is Stone. This might be some of the La La Land Academy Award-winner’s best work yet. Abigail goes from being a free-spirited ingénue who wouldn’t pull the wings off a fly to a venomous schemer who can plot and plan alongside the best of the palace scorpions, all of whom are just sitting there waiting for the best moment to strike. Watching Abigail give into all her darker tendencies, seeing her soul erode bit by bit as she does so, Stone infuses this transformation with a demoralizing sadness that’s hauntingly tragic. At the same time, she also brings a level of comic exuberance to events that are undeniably hysterical, the actress showcasing a rare ability to combine laughter and tears into one gigantic stew of authentic emotional excess. 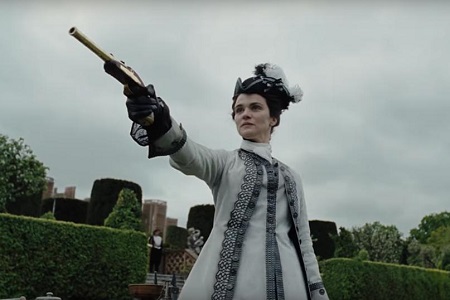 After Dogtooth, The Lobster and The Killing of a Sacred Deer it’s clear that Lanthimos loves to challenge himself. It’s also just as apparent he has no wish to play things safe. He melds genres and styles with intuitive flair, confidently allowing modern dance to enter into a historical drama in the same way he brought silent movie techniques, Ealing Studios comedic principles and Kubrickian meets Hitchcockian aesthetics to his previous efforts. While Lanthimos doesn’t go whole-hog on the modernizing of this story in the same way that someone like Sofia Coppola did with Marie Antoinette that doesn’t make what he’s done with Davis and McNamara’s screenplay any less revolutionary. It’s all incredibly directed, his level of control over all this peculiar madness sublime.

The technical facets are beyond reproach. Robbie Ryan’s (American Honey) cinematography, Yorgos Mavropsaridis’ (The Lobster) editing, Fiona Crombie’s (Macbeth) production design, Sandy Powell’s (Cinderella) costumes, makeup, art direction, Lanthimos’ canny utilization of an eclectic collection of classical music selections, all of that and more is exceptional. The film is as much a sensory explosion as it is an emotive one, every facet of the production working in tandem with its counterpart that allows the motion picture achieve maximum impact. If The Favourite isn’t the filmmaker’s best feature yet, it’s certainly in the discussion, watching it an all-encompassing blast of joyful malevolence I didn’t want to come to an end.