A group of six friends go into the woods for a quiet camping trip. During the first night they are attacked by what they think was a wild animal. They were wrong. 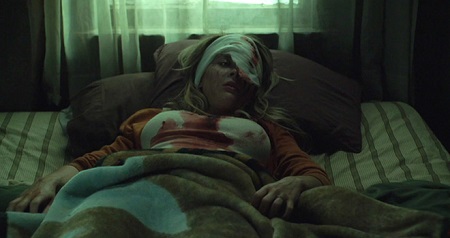 “Six medical students head off into the woods for a camping holiday away from the hustle and bustle of school. The de facto leader of their little group is budding hematologist Alice (Scout Taylor-Compton), and when evening hits and everyone couples up and retires the late night chatter mostly revolves around whether or not her romance with newcomer Jules (Olivia Luccardi) is anything more than a collegiate fling. Just as everyone is falling asleep a scream echoes through the woods, all of them bolting out from their tents to see what is making so much noise. There’s something out there in the darkness, a creature that hungers for human flesh, Alice and her friends all potential targets for this animal to sink its teeth into.

It’s not really a surprise that things are much worse than any of them know, director and co-writer Mark H. Young (The Killing Jar) composing a story that checks most of the modern zombie-as-metaphor-for-viral-infection boxes for his gory horror offering Feral. Eventually Alice and her surviving friends find themselves trapped inside the cabin of a curiously helpful hunter named Talbot (Lew Temple), all of them forced to do whatever it takes to live through the night while also hoping they don’t end up dinner to one of those things or, even worse, transformed into one courtesy of scratch or bite. It’s basically Cabin Fever meets 28 Days Later… only without the pitch-black humor of the former and the controlled, expertly directed chaos of the latter, Young’s low budget offshoot content to revel in its blasé mediocrity with a strange, effortless confidence that in some ways is honestly kind of impressive.

But the movie isn’t good. In fairness, it also isn’t bad. It’s just instantly forgettable and devoid of any original ideas save that it plants a young lesbian couple at the top of young-people-in-jeopardy pyramid. As laudable as that might be, and as credible in their respective roles as Taylor-Compton and Luccardi prove to be, the lack of anything resembling a surprise is just too big an obstacle for the film to overcome. The nature of the threat, Talbot’s potentially nefarious intentions, the order in which characters are either infected or outright killed, all of that follows a boringly predictable pattern, and as such caring about any of what is transpiring proves to be close to impossible.

This is admittedly a well-made film, however, and from a directorial standpoint Young certainly does a workmanlike job. He keeps the pace moving, wasting no time unleashing his creatures and putting Alice and her friends in mortal danger. There’s a nicely choreographed set piece in a dingy cellar where a survivor faces down one of the infected with nothing more than a baseball bat and their wits, while the initial attack sequence that kicks things off is suitably tense. The film features crackerjack makeup and gore effects, while Christos C. Bitsakos’ lively cinematography balances varying levels of darkness and light splendidly. Most importantly, Taylor-Compton grounds things with conviction, her Alice a strong-willed and intelligent heroine worth rooting for.

Unfortunately none of that matters. Feral is undone by its rote over-familiarity. It’s hard not to feel like I’ve seen this story done before on multiple occasions. The whole thing is too by-the-numbers to generate a consistent feeling of suspense or dread, and by the time the film reaches its rather foregone conclusion I’d already emotionally checked out long before this climax. Even with veteran composer Elia Cmiral’s (Ronin) suitably ominous score working overtime I just didn’t care about anything that was happening, all of which makes Young’s latest something of a slight disappointment part of me wishes I’d not have taken the time to see.”

I don’t mind Feral. It has a few shocks here and there, and if a person is watching it on Netflix or Shudder I’m hard-pressed to imagine they’re going to feel like they’ve wasted their time giving it a look. But that doesn’t make the overall film any less forgettable, as such the thought anyone would be excited about adding the title to their personal library is to my mind fairly nonexistent.

The only extras included here is the film’s Original Theatrical Trailer (2:00).

Thanks to Scout Taylor-Compton’s solid performance, cinematographer Christos C. Bitsakos’ suitably creepy visuals and Elia Cmiral’s strong score, Mark H. Young’s Feral is hardly a waste of time. It just doesn’t do enough original or new to be memorable, and as such ends up being just another low budget zombie infection thriller seemingly made to fill up streaming service horror queues and little of anything else.