Chan and Brosnan Give The Foreigner a Pugnacious Kick

After his daughter is killed in a London terrorist bombing, mild-mannered restaurant owner Quan Ngoc Minh (Jackie Chan) wants answers, going to the offices of investigating officer Commander Richard Bromley (Ray Fearon) every day urgung him to tell him who was behind this dreadful act of violence. All he learns is that a group calling themselves the “Authentic I.R.A.” has claimed responsibility, and for the time being the British are allowing Irish Deputy Minister Liam Hennessy (Pierce Brosnan) to follow any and all leads as he sees best. 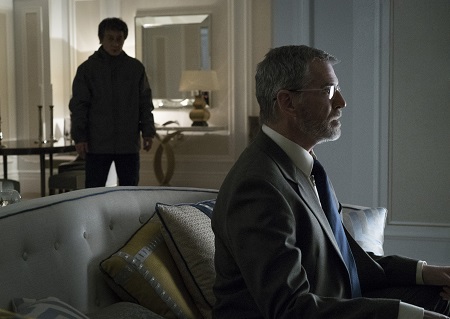 Heading to Ireland, Quan proceeds to demand the same thing from Hennessy that he wanted to know from Commander Bromley, the identity of who it was that planned and executed the bombing that killed his child. But unbeknownst to everyone, this seemingly timid Chinese immigrant and restaurateur isn’t what he appears to be. More, he manages to learn that Hennessy isn’t nearly as forthcoming as the Brits seem to think he’s being. Quan applies pressure on the Deputy Minister to reveal what he knows, proving to be much more resourceful and able to handle himself in a fight than anyone suspected this sixty-something Chinaman was capable of being.

Based on the novel The Chinaman by Stephen Leather, director Martin Campbell (Goldeneye, Casino Royale) and screenwriter David Marconi (Enemy of the State, Live Free or Die Hard) join forces to unleash The Foreigner, a surprisingly solid political action-thriller that’s far more character-driven than initially meets the eye. Utilizing the talents of both Chan and Brosnan perfectly, if not for a sudden left turn into unrelentingly grim ultraviolence and torture during the final few minutes, this movie proves to be a massively entertaining gem. Even with that being the case, it’s still fairly easy to walk away from this one smiling, Campbell proving once again he’s a dynamic old school craftsman who could likely helm a story like this in his sleep and still make it wonderful if he so desired.

The reason things ends up working near as well as they do is in large part thanks to the filmmaker’s refusal to rush things. It’s not until over a third of the way into the film before Quan decides to take action, the first big action set piece not happening until all of the primary principals have been determined and their relationship to the mystery as it pertains to the identities of those calling themselves the Authentic I.R.A. has been solidified. This adds a layer of realism a lesser motion picture wouldn’t want to deal with, choosing instead to rush to the moment where Chan is unleashed and everyone can sit there awestruck by the still remarkable acrobatic talents of the 63-year-old icon.

But Campbell, a Bond veteran but also an accomplished filmmaker known for smartly crafted efforts like Criminal Law, No Escape, The Mask of Zorro and Edge of Darkness, knows less is more where it comes to stories like this. He understands that it’s far more suspenseful and exciting if Chan isn’t fighting for his life every five minutes, instead choosing to hold him in check until the moments it makes the most sense for his particular set of skills to be utilized. He stages these sequences in ways that honestly and authentically address the actor’s age. Quan fights in a manner that leads one to believe he knows that if every confrontation were to last longer than a handful of minutes he’d likely come out the loser. Instead, he does all he can to make these confrontations end as quickly as possible, as such the carnage is quick, shocking and typically overflowing in adrenaline.

Chan has likely never had a role in an English language movie this vigorously multifaceted. Campbell has obviously seen his work in many of his Chinese classics like Police Story or in more recent fare like 2010’s Little Big Soldier and understands he’s a far better actor than he’s usually given credit for being. The director utilizes all of Chan’s skills, including his comedic ones, in a manner that is heartbreakingly sincere, and as such Quan becomes a far more compelling figure than he otherwise would have been.

As for Brosnan, Campbell is the one who helped him become James Bond with Goldeneye back in 1995, and with that being the case it’s not a huge surprise that the actor is fully engaged, totally onboard with all his director is asking him to do. It’s a reminder that Brosnan has always been capable of delivering mischievously intricate performances that tend to fly under the radar for one reason or another, films like Love Is All You Need, The Matador, The Ghost Writer, The Tailor of Panama and The Thomas Crown Affair proving that to be the case time and time again. Hennessy fits right in with many of the actor’s best roles, this friendly, seemingly gregarious politician a far more lethal and cunning adversary than he wants others to know, unleashing his rage only when the situation calls for it to be put on display and no other alternative are open to him.

The movie itself is honestly much more straightforward. It’s pretty apparent that Marconi isn’t attempting to reinvent the political thriller wheel sticking fairly close to the source material, sometimes to the story’s detriment. Secondary characters and various subplots aren’t nearly as well realized or as compelling as I’m certain he and Campbell hope they would be, while a third act chase to find a hidden bomb at an airport ends up being more ludicrous and unintentionally funny than it is anything else. There’s also the sudden emphasis on torture and bloodcurdling violence that happens around this point as well, and while the film never eschews the brutality of what it was these terrorists were doing, I still can’t say I was ready for just how bleakly sadistic some of the climactic sequences end up proving to be.

All the same, I liked The Foreigner. There’s a chase sequence featuring Chan inside an Irish bed and breakfast that just needs to be seen to be believed, while a forest-set battle between his character and an expertly trained Special Forces tracker is all that and a pugnaciously delicious bag of chips, let me tell you. It’s also nice to see Brosnan so energized by the material, not just floating around the periphery picking up an easy paycheck, his performance more emotionally introspective than I was ready for. This movie works, and even if it doesn’t quite succeed on all levels, from an overall entertainment perspective there’s very little negative that I can say.