Overeager Friend Request Not Worth Accepting

College psychology major Laura (Alycia Debnam-Carey) is a smart, beautiful young woman whose welcoming personality draws people to her everywhere she goes. One of those is outcast Marina (Liesl Ahlers), a random fellow student who tends to spook the majority of those she comes into contact with. But not Laura, and wanting to make herself a good example to best friends and roommates Olivia (Brit Morgan) and Isabel (Brooke Markham), she accepts Marina’s Facebook friend request while also doing what she can to make nice with the strange girl. 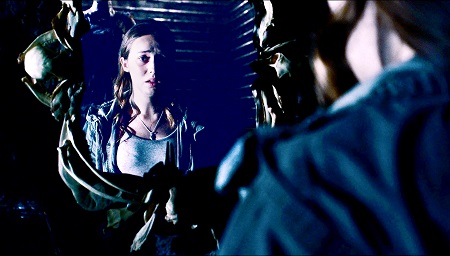 But things get weird fast. It’s almost as if Marina is stalking her, trying to insert herself into every facet of Laura’s life even though they’ve just started getting to know one another. In a fit of fear, frustration and anger, she unfriends her new Facebook BFF, and in doing so sparks a supernatural maelstrom that will rip her life to shreds. Marina doesn’t take kindly to rejection, and even after filming herself committing suicide and posting the video online, she’s still going to make certain all of Laura’s friends and loved ones, including both her current boyfriend Tyler (William Moseley) as well as her ex, computer whiz Kobe (Connor Paolo), face her wrath.

The 2016 German-produced horror yarn Friend Request plays like an uneasy combination of Gore Verbinski’s 2002 remake of The Ring, the underwhelming 2015 modest cybernetic hit Unfriended and a more supernaturally inclined variation on Barbet Schroeder’s 1992 favorite Single White Female. Director and co-writer Simon Verhoeven’s (Men in the City) confection is a pretty standard genre yarn, one filled with many of the requisite shrieks and shocks one comes to expect from these sorts of efforts. It almost works, many elements of this little thriller far more effectively unsettling than they have any right to be, and if not for some serious instances of unparalleled stupidity there might have been something creepily fun here to talk about.

Let’s start with what gets excited about the movie. First of all, Debnam-Carey, a relative newcomer likely best known for 2014’s Into the Storm and a featured role on AMC’s “Fear the Walking Dead,” is quite good as Laura. She grounds the story with an intense, emotionally complex performance that’s far more interesting than I felt the film itself deserved. Additionally, Verhoeven knows how to maximize the creep factor, a sense of omnipresent dread permeating things all the way through no matter how ludicrous events eventually become. He also paces things nicely, and for the most part I can’t say I was ever squirming in my seat in boredom wishing the film would end.

But the script, as timely as it is trying desperately to be, talking about internet, cyberculture and how the youth and young adults of today are slowly losing their identities to an online realm where individuality, anonymity and privacy are a thing of the past, does not work very well. These ideas are heavy-handed to the point of being didactic, extended bits where Laura is coming to grips with the reality that she didn’t exactly make the best choices in regards to sharing so much of her life online tiresomely obvious.

Still, that’s not the biggest problem. The unforgivable element is just how beyond stupid every single person in authority, whether they be a college administrator, a police detective, a parent, a Facebook help desk clerk or even a run-of-the-mill taxi driver, all prove to be. Look, people doing dumb things in a horror movie is par for the course. Heck, it’s even part of the fun. But there becomes a point where things can get taken a step too far. As far as Verhoeven’s movie is concerned, that step comes almost immediately after Marina kills herself and the video she made ends up on Laura’s Facebook wall. From that point forward all the periphery adults couldn’t act more unrealistically or unprofessionally if they actively tried. It’s unintentionally hilarious, and by the time we get to an extended bit in a hospital with one of Laura’s friend’s in a coma and the cop watching her acts like a total nincompoop my eyes had rolled so far back into my head it’s amazing they didn’t get stuck there. 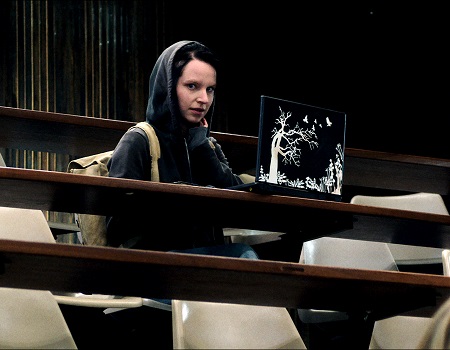 Don’t get me wrong. As promising a filmmaker as Verhoeven might be (he’s been nominated for a number of German awards, including winning Best Director from the Munich Film Festival in 2016 for his refugee comedy/drama Welcome to Germany) that doesn’t mean he’s firing on all creative cylinders for all of his film’s 92 minutes. The jump scares, while initially effective, grow tiresome, especially when they are no longer organic to the story and are presented just to generate a random shriek out of the audience. The final showdown between Laura and her ghoulish witch of an adversary Marina is also a major letdown, their face-off leading to a denouement that’s as shocking as an episode of “The Lawrence Welk Show” and as terrifying as a kitten pawing at a ball of string.

Look, Friend Request actually does have a lot going for it. One death near the end is something of a disquieting surprise, and there’s a terrific nightmare sequence where Laura stares into a gothic black mirror and sees horrific images of violence and insanity that sent an authentic shiver right down the center of my spine. But for a real world supernatural horror tale involving cybernetic addiction, there’s just too much about this film that’s frankly stupid and silly for any of the more insidious scares to be effective. For all its potential, Friend Request deserves to be ignored, swiping left and forgetting about this film entirely the only course of action I can in good conscience recommend.