Living in a remote village, ex-gangster Hai Phuong (Veronica Ngo) left Saigon in a hurry, hoping to escape into anonymity after the birth of her daughter. Getting a job as a collection agent, she is known throughout the community as an angry, unyielding enforcer, rarely taking pity on those she has come to recover a debt from. This does not make her now 10-year-old child Mai (Cat Vy) popular with either her schoolmates or her teachers, and as much as Hai Phuong urges her daughter to commit to her studies the youngster would rather fish the local river instead of finishing her math homework. 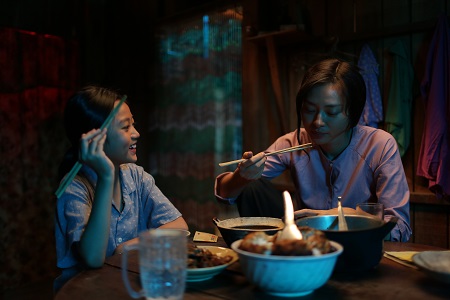 Spending a sunny day at the local market, the relative happiness of the moment is shattered when the two have an argument after Mai is wrongly accused of stealing a woman’s wallet. When she wanders over to a secluded dock to shed a tear in relative quiet, the girl is forcibly abducted by a pair of men who steal her down the river in a stolen boat. Responding to her daughter’s cries for help Hai Phuong springs into action, fighting off a bevy of assailants in her rescue attempt. But they have too much of a head start, the men escaping onto a bus to Saigon before the aggrieved mother can catch up with them. Yet Hai Phuong will not relent and she will not stop. She will return to Saigon and do whatever it takes to ensure Mai is freed, and woe to anyone, anyone at all, who stands in this former gangster’s way in her mission to be reunited with her beloved daughter.

Vietnamese action-thriller Furie is very, very good. Writer/director Le Van Kiet’s confident, dynamically paced film hits the ground running and subsequently refuses to let up for any second of its 98-minute running time. But as violently compelling as events prove to be, the filmmaker still remembers to craft a complex, multi-dimensional lead character worthy of the audience’s emotional investment. Hai Phuong is a dangerous woman with a disquieting past who is plagued by the choices she has made in her life. More, she is saddled with almost crippling shame as it pertains to the example she feels she has set for her daughter. Yet Hai Phuong’s selfless, unyielding love for Mai is equally never in doubt, and it is the very skills she is most ashamed of that will allow her to track down the child and potentially free her from a never-ending legion of lethally murderous abductors.

It is all slightly reminiscent of Taken. But whereas that movie was really nothing more than a live action cartoon given some semblance of legitimacy courtesy of its star Liam Neeson’s grizzled, hard-boiled performance, for all its flamboyant, highly-energized action sequences Kiet’s effort is grounded in both its culture and its characters in ways that 2008 hit (or its increasingly pathetic sequels) never was. It also helps that Ngo, likely best known for her brief appearance as heroic bomber pilot Paige Tico in Star Wars: The Last Jedi, is superb as Hai Phuong. She brings a level of haunted gravitas to events that is frequently heartbreaking. It also makes her believable, for while her character is an undeniably talented martial artist and fighter, she’s hardly so gifted in her abilities that the outcome is forgone when the determined mother encounters any of those responsible for kidnapping her child. Instead, her strength comes from her tenacity and undying belief she will save Mai no matter what the cost, Ngo doing a magnificent job making these pugnaciously compelling emotions feel tangible and intimate.

A massive subplot involving a Saigon detective (Thanh Nhien Phan) trying to bust an international child abduction and organ harvesting ring isn’t developed particularly well, while something concerning Hai Phuong and a mysterious arson that happened before she fled the city is so nondescript its almost as if it never happened at all. But there is a brief, undeniably terrific moment where the aggrieved mother searches out her estranged brother, the scene refusing to go the way convention dictates it should have and in doing so becomes far more heartbreakingly real. Additionally, the sequence where Mai is wrongly accused of stealing that wallet is also stellar, the look of regret-fueled anguish that washes over Ngo’s face as Hai Phuong learns the truth positively devastating. 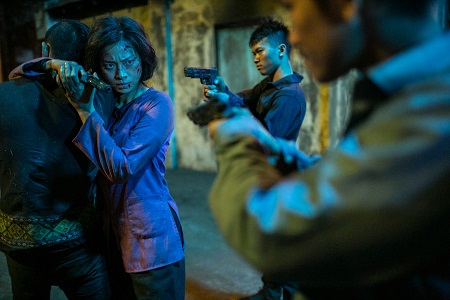 As for the action sequences, I’m going to go out on a limb and assume Kiet did his homework because there is an adrenaline-fueled insanity to the majority of them reminiscent of other internationally-flavored genre favorites like Gareth Evans’ The Raid 2 or Byung-gil Jung’s The Villainess. He allows scenes to play themselves out in long extended takes where the camera glides along observing the fisticuffs, eschews a lot of quick cuts or unnecessary edits that potentially could have reduced all that’s happening to a nonsensical visual blur. It’s continually impressive, and from the opening set piece inside that outdoor market to a climactic whirligig taking place in a secluded train warehouse there was never a moment where I wanted to turn my eyes away from the screen.

It all resolves itself pretty much as I expected it to, and there aren’t a lot of surprises where it comes to any of the climactic events. But the last 15 minutes features a flurry of stunning sequences set on a speeding train, all of them staged with an energetic flair that’s impressively hair-raising. As I’ve already stated, Furie is very, very good, and I think fans of character-driven action cinema owe it to themselves to give this monstrously entertaining Vietnamese entry into the genre an immediate look.