One of my earliest memories is my mother reading me A.A. Milne‘s The Complete Tales of Winnie-the-Pooh before I was even in preschool. I remember sitting there in rapt attention, listening to these tales of Pooh, Piglet, Eeyore, Tigger and the rest of the inhabitants of the Hundred Acre Wood whilst dreaming of joining Christopher Robin and this merry band on each of their numerous adventures. I wanted to hunt Heffalumps. I wanted to soar to the top of the tallest tree utilizing a bevy of red balloons. I wanted to rush outside and play Pooh Sticks. I wanted to go visit Rabbit for lunch and enjoy tea with Owl in the mid-afternoon. It was all wonderful, every second, these memories living inside of me so strongly I can say with absolute certainty they’ll be there forever. 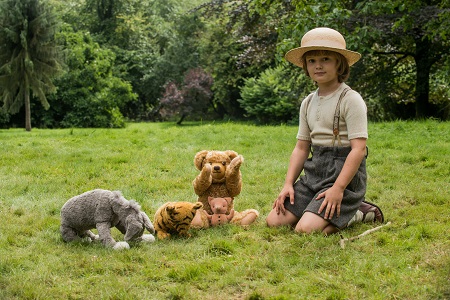 As I grew older, I read Milne’s book on my own, finding so much more to this genius’ writing as I poured through every word on my own. I fell in love with Disney’s interpretation of these characters, The Many Adventures of Winnie the Pooh one of my favorite animated features and a movie that just the thought of brings a smile to my face and makes me feel like all the world’s problems can somehow be fixed. Now, as an aunt to five nieces and one nephew, I’ve made sure each of them has their personal copy of The Complete Tales of Winnie-the-Pooh to call their own, and I hope as each grows older they will cherish these stories and characters even a tenth as much as I do.

With all that being the case, it’s likely I was in the bag for director Simon Curtis’s (Woman in Gold) drama Goodbye Christopher Robin before I even set one step into the theatre. Working from a script by Frank Cottrell-Boyce (The Railway Man) and Simon Vaughan, the movie is a look at what led Alan Alexander Milne (Domhnall Gleeson), still reeling from the horrors he suffered and the atrocities he witnessed while fighting during WWI, to write the very first story featuring everyone’s favorite “silly old bear.” A successful playwright and author, much to the consternation of his socialite wife Daphne (Margot Robbie), Milne retreats from the hustle and bustle of London to the peace and quiet of the countryside. The pair is joined by their son Christopher, a.k.a. Billy Moon (Will Tilston), and his doting nanny Olive (Kelly Macdonald), the four of them attempting to make the most of their seclusion as best they can.

After Daphne retreats back to London, claiming she will not return until her husband starts writing again, and Olive is forced to take time off to go take care of her ailing mother, Alan and Billy find themselves alone. The pair begins to bond, the author fascinated by the imaginative stories he and his son come up with involving the child’s various stuffed animals. Asking friend, illustrator and fellow war veteran E.H. Shepard (Stephen Campbell Moore) to come out for a visit, Alan begins planting the seeds that will lead to the publication of Winnie-the-Pooh in 1926. What happens next changes both the author’s and his son’s lives forever, each having to live in the shadow of a fictional character they together mutually imagined into existence.

There’s so much that Curtis’s film does right I almost don’t even want to talk about the few missteps that happen along the way towards the story’s cathartically tearful conclusion. Even so, Cottrell-Boyce and Vaughan’s screenplay spends so much glorious time on Alan and Billy’s relationship, that by the time it gets to the hysteria revolving around all of the Pooh books, most of these sequences can’t help but feel rushed and dramatically undernourished. Daphne’s character, as strong as Robbie’s performance proves to be, is also noticeably underwritten, and while it’s historically accurate she and her son didn’t exactly get along (especially as he got older), as presented here this mother is such a selfish shrew and a self-centered narcissist having anything approaching sympathy for her proves to be impossible.

Then there is the climactic act, Billy now 18 (and portrayed wonderfully by Alex Lawther) and wanting to head off to take part in WWII, looking to follow in his father’s footsteps (much to his dismay) as well as in the hope by doing so he’ll finally get out from underneath Winnie-the-Pooh’s gigantic shadow. This stuff happens all at once. I just didn’t feel like I was given ample enough of an opportunity to get to know Billy at this new age, and as such the drama of his going off to war didn’t have the impact upon me as I assumed it would going into the press screening. 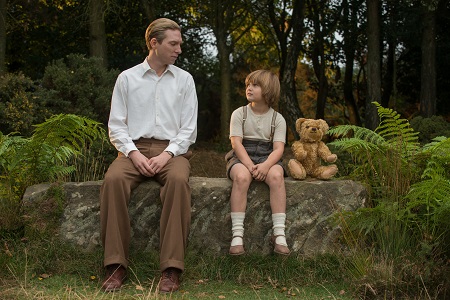 Even so, I adored Goodbye Christopher Robin. There were numerous scenes that reconnected me with Milne’s world in ways I hadn’t felt since I was a child, and I couldn’t help but recall those moments, so very long ago, looking up at my mother in wide-eyed love and admiration as she read to me these stories for the first time. The scenes between Gleeson and Tilston are perfection, their time wandering through the forest inventing the tales that would eventually blossom into the author’s books holding me rapturously spellbound. Curtis manages to tap into the mature sensitivity of these various stories that’s magnificent, maintaining an intelligent maturity that works for adult and child audiences alike throughout.

It’s possible I’m biased. There’s a chance when I go back and watch the film again, my various nitpicks might grow to become something far more frustratingly bothersome than they are at this moment. But I have trouble believing that will happen. Curtis gets far too much right, and there are so many bits and pieces that wormed their way into my heart I have trouble believing they’ll be going anywhere anytime soon. My love for Winnie-the-Pooh and his many adventures knows no limitations; my admiration of Goodbye Christopher Robin almost equally as strong. Silly old bear, indeed.