The East meets West giant monsters attacking ancient China fantasy-adventure The Great Wall is both a heck of a lot better than anticipated and far worse than anyone could have possibly imagined. Directed by legendary auteur Zhang Yimou, incontestably one of the world’s greatest living filmmakers, the man’s list of classics including cinematic essentials like Raise the Red Lantern, Hero, House of Flying Daggers, Ju Dou and To Live, the movie is a visual feast. Featuring stunning costumes designed by Mayes C. Rubeo (John Carter), incredible production design courtesy of Oscar-winner John Myhre (Memoirs of a Geisha, Chicago) and eye-popping art and set direction, oftentimes there’s so much going on in the frame it’s almost impossible to take it all in. 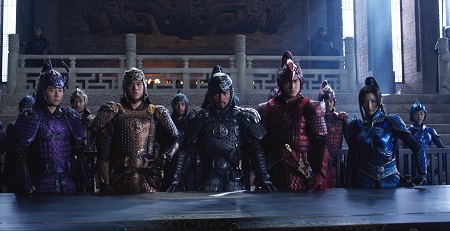 Then there are the Chinese members of the cast, a selection of all-star talents both veteran and newcomer who give the material a level of grit and gravitas it would never have obtained without their participation. The gorgeous Jing Tian is Lin Mae, a fearless warrior who defies gravity as she leads her troops into battle. Zhang Hanyu is the weary and wise General Shao, commander of a vast legion known as the Nameless Order tasked with protecting all of China from a strange, carnivorous adversary. Rounding things out is the great Andy Lau as military adviser Strategist Wang, a man determined to uncover the secrets of the creatures at the foot of The Great Wall in order to make sure victory remains possible no matter how elusive it might initially appear.

Sadly, as glorious as all of those elements might be, none of it matters near as much as it potentially could have had this been a strictly Chinese production with not Hollywood input. Considering that the story was conceived by Max Brooks (World War Z) and The Last Samurai collaborators Edward Zwick and Marshall Herskovitz while the screenplay was written by Carlo Bernard (The Sorcerer’s Apprentice), Doug Miro (The Uninvited) and Tony Gilroy (Michael Clayton), it goes without saying this was never going to be the case. There is a serious disconnect between material and the filmmakers, nothing ever connecting in a way that could be construed as even moderately satisfying. Worse, in the end the whole thing becomes nothing more than a stereotypical White Savior monstrosity, Matt Damon’s ace bowman and mercenary William Garin showing up at just the right minute to lead the Chinese to victory.

For so many writers, the story itself is pretty rudimentary, almost as if the six of them took turns writing lines on the front and back of a restaurant napkin while downing vast quantities of sake. Battle-scarred warrior William and his trusted compatriot Tovar (Pedro Pascal) have arrived in China hoping to trade for a magical substance known only as “Black Powder.” Coming to the base of The Great Wall, they are captured by the Nameless Order who are under the command of the revered General Shao. But before any decision can be made as to the pair’s destiny, Shao’s legions are under assault from a vicious, carnivorous horde of ancient creatures known as the Tao Tei. Forced to take up arms in order to survive, William and Tovar prove themselves to be powerful fighters, the two suddenly faced with the choice as to whether they should stay and assist the Nameless Order in their travails or steal away in the night with stolen supplies of Black Powder hidden in their saddle bags.

The initial attack by the Tao Tei is extraordinary, showcasing Yimou at the height of his powers. Soldiers balletically fling themselves off of the Wall descending into a horde of lizard-like carnivores only to spring back to the top in order to rearm themselves. Massive fireballs are launched via mechanical catapults, while various groups of well-armed soldiers attempt to take the creatures out by hand when a handful of them breach the defenses. It’s all staged about as spectacularly as one could hope for, and while nothing rises to the level of the bamboo forest fight sequence in House of Flying Daggers or the graceful lakeside duel to the death in Hero, the director deftly conjures up images and moments that recall both films all the same.

But it’s all so stupid. Worse, it barely makes any sense, and there are times where it felt like huge portions of the narrative had been excised from the finished film for no easily discernible reason. A key supporting player portrayed by Willem Dafoe, a man who has been waiting a quarter of a century to make his escape from China, is nothing short of a complete idiot, his supposedly fool-proof plan a reckless boondoggle that’s categorically insane. An entire subplot revolves around magnets and the effect they have on the Tao Tei, but how and why it works is never convincingly explained. More than that, there is mention made that this strategy to fight the beasts has been utilized before but for some reason was kept secret from the Nameless Order for 900 years, the only reason it’s been revealed to the soldiers now having to do with the young Chinese Emperor (Junkai Wang) wanting one of the creatures as some sort of living prize or pet. 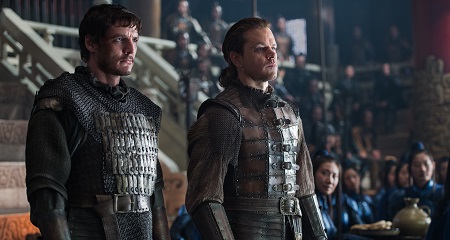 Then there are the Damon elements. It isn’t that William insertion into the story isn’t plausible, it is, it’s that the cadre of story and screenwriters allow him to show up and save the day even though his character knows practically nothing of the enemy the Chinese are fighting or the strategies they’ve devised over the centuries to stop them. While I’m not saying the character could not emerge out of this carnage a hero, that’s perfectly fine, to make him the primary reason success or failure comes to pass is a tired, culturally insensitive cliché that’s close to inexcusable, the film’s climax off-putting and insufferable in large part because of this.

It’s hard to understand what it was that attracted Yimou to this project, the revered director certainly never showing an interest to work inside the Hollywood studio system before now. While he certainly doesn’t brush the film off or not give it his full attention, that doesn’t make the risible aspects or the blatantly stupid portions any less unacceptable. There are facets of The Great Wall to be adored, maybe even reveled in, there are just not enough of them to make sitting through all the turgidly offensive and grotesquely asinine bits worthwhile. The movie is a muddled monster mash that’s as disappointing as it is insignificant, and I imagine as far as Yimou is concerned he’ll think twice before accepting another paycheck from Hollywood anytime soon.