Desmond Doss (Andrew Garfield) is compelled to serve. With all his friends, even his older brother Harold (Nathaniel Buzolic), enlisting to fight in the war against the Germans and the Japanese, the passionately devout young man feels it is his duty to do the same. Problem is, he will not pick up a gun and he is determined to not take a human life, and while he wants to be out on the front lines he wants to be there as a medic, pulling injured men off of the battlefield after the enemy has shot them full of holes and left them for dead. 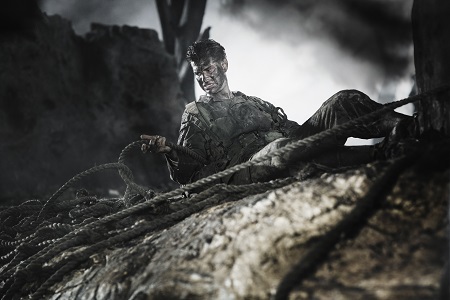 His fervent religiosity understandably does not sit well with his commanding officer Captain Glover (Sam Worthington) or his drill instructor Sergeant Howell (Vince Vaughn), while the fellow members of Doss’ unit look at him more as a liability than as a valued member of their team. Still, for all their attempts to run him out of the Army, the erstwhile medic is still there, eager to join his fellow soldiers on whatever battlefield they are sent to, ready to rush into the onslaught of bullets and bayonets without a single weapon to protect himself with.

Based on a true story, Hacksaw Ridge is Mel Gibson’s (Apocalypto) return to the director’s chair for the first time in a decade, the Oscar-winner for Braveheart making his way back onto the battlefield to showcase a story of courage, combat and faith that’s unlike few other WWII stories. One part carnage-filled epic of chaos, another part old Hollywood love story about two souls intimately drawn together during the most perilous of circumstances, and a final one involving faith-based themes of sacrifice and spirituality that should leave The Passion of the Christ fans pleased as punch, the movie is an intriguing examination of a complex character who never lets go of his beliefs even when the events surrounding him are at their most critically dire. It’s a marvelously engaging story, one that is as thought-provoking as it is thrilling, and even if it all can be a little tonally uneven Gibson’s confidence bringing Doss’ story to life is undeniable every step of the way.

The early portions are an odd combination of films like Howard Hawks’ pacifist-turned-hero Sergeant York and a pair of Stanley Kubrick classics, the military courtroom drama Paths of Glory and his metaphorical Vietnam freak-out Full Metal Jacket, the comparisons to those latter two not entirely flattering. But the stuff dealing with Doss’ romance with a doe-eyed Army nurse Dorothy Schutte (Teresa Palmer)? Or the interactions between the future soldier and his emotionally damaged father Tom (Hugo Weaving), a WWI veteran who’s never gotten over his own trench warfare traumas? Or the debates revolving around the recruit’s commitment to his faith no matter what the personal cost to his future happiness? That stuff is terrific, allowing the character to build complicated internal layers that will be further explored as soon as Doss and his unit end up at the titular Okinawa locale.

Unsurprisingly, it is at Hacksaw Ridge, one of WWII’s bloodiest battles during the campaign against Japan, where the film shoots into overdrive. The initial attack, one that will undoubtedly draw comparisons to the D-Day sequence in Steven Spielberg’s Saving Private Ryan, is actually far more similar to what Clint Eastwood came up with for his masterful Letters from Iwo Jima. Like the events of that fellow WWII epic, Gibson analyzes the entire battlefield, and while Doss is his main character that doesn’t mean the filmmaker spends all his time following him around. Instead, the director m makes sure to catalog all that transpires down to the smallest detail, showcasing the gruesome bits of carnage affecting both armies, the hell of war its own gruesome crucible that judges all warriors equally.

This allows the climactic act, the one chronicling Doss’ undeniable valor, to take center stage in a way that is intuitively personal. With victory transforming into defeat, his unit forced to retreat back down to the beach, the medic refuses to leave, the screams of the dying survivors calling him back into the fray. Secretly, as stealthily as he can, Doss rescues 75 wounded soldiers right underneath the Japanese nose, lowering them down to the beach by himself, one right after another. It’s an unfathomable act of courage, one that led to the soldier being honored with the Congressional Medal of Honor, the first conscientious objector to be so honored by the President.

It doesn’t all fit together, Gibson’s handling of Andrew Knight (The Water Diviner) and Robert Schenkkan’s (The Quiet American) script a sometimes uneasy balancing act of violence and compassion that doesn’t always gel together. There are also some theological allusions that come perilously close to jamming the film’s religious metaphors down the viewer’s throat, some climactic visuals of a body descending down the ridge on a stretcher as the sun shines from above like a spotlight switched on by God hardly subtle.

But Garfield is extraordinary, delivering a performance that reminded me both of Gary Cooper’s in the aforementioned Sergeant York but also Gregory Peck’s in Pork Chop Hill, the kinetic intensity of that 1959 Lewis Milestone classic about the Korean War actually quite similar to what Gibson is able to generate here. But, back to the actor, this is one of the talented The Social Network and The Amazing Spider-Man star’s finest hours, his impassioned portrait never lapsing into cornpone Southern stereotype or caricature. Instead, Garfield manages to explore all of Doss’ varying stratums, balancing the medic’s commitment to his God as well as his allegiance to his fellow soldiers in a refreshingly naturalistic manner.

Gibson uses his entire cast magnificently, even Worthington and Vaughn, while both Rachel Griffiths (as Doss’ devoted mother Bertha) and Palmer make an indelible impact that’s beyond undeniable. Best of all, however, is Weaving, disappearing inside the visage of his drunken, pugnacious former soldier in ways that caught me slightly by surprise. It’s the veteran character actor’s second superlative supporting turn this year, his first being found in Jocelyn Moorhouse’s criminally underrated The Dressmaker, this one making even more of a lasting impression upon me. 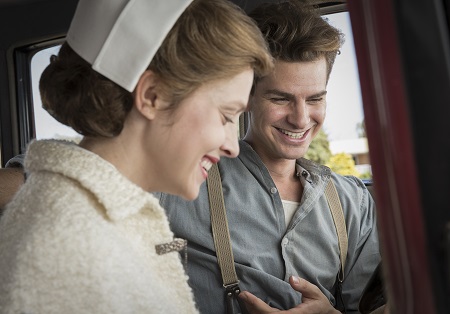 After learning from the likes of George Miller, Peter Weir and Richard Donner, Gibson continues to excel in the director’s chair, understanding visual compositions, action choreography and how to maintain a sense of cohesive geography in rather significant ways. He’s also a fan of melodrama, a trait that can often work against him, the actor-turned-director playing up the emotional elements in ways that can feel moderately facile from time to time. Here, though, those tendencies work in concert more often than they do not, allowing Doss’s courage to resonate fully and with precious few reservations.

Does this mean Gibson is back? That his work here coupled with his fine acting in Jean-François Richet’s tough-as-nails B-grade thriller Blood Father are likely to put him back into the good graces of general audiences as well as the powers that be in Hollywood? It’s hard to say, Gibson’s past diatribes and outbursts understandably doing him no favors as far as all of that is concerned. Even so, Hacksaw Ridge is a fine motion picture, one whose themes and ideas obviously speak to the filmmaker, and if Doss’ story has helped change him as far as being a decent human being is concerned, that makes it all even better.