Spanning the years between 1964 and 1983, Hands of Stone is a boxing biopic that chronicles the life of Panamanian icon Roberto Durán (Edgar Ramírez), primarily focusing on his relationship with legendary American trainer Ray Arcel (Robert De Niro). It also makes an attempt to take a snapshot of his romance with wife Felicidad Iglesias (Ana de Armas) while also spending a great deal of time analyzing his rivalry and friendship with Sugar Ray Leonard (Usher Raymond IV), these stories intermingling throughout the film’s briskly paced 105 minutes.

Written and directed by Jonathan Jakubowicz, while impressively cast, the movie is an emotionally sluggish, oddly uninspiring chronicle of one of the great personalities in all of sports history. Its episodic approach only works in fits and starts, the boxing scenes having a frustratingly lifeless quality devoid of energy or excitement. I never got a feel for what it was that made Durán such a ferocious talent, the two fights with Leonard particularly disappointing considering just how huge both are in boxing lore. There’s a perfunctory, by-the-numbers quality here that is tiresome, the visceral intensity of the sport somehow absent for the majority of the motion picture’s running time. 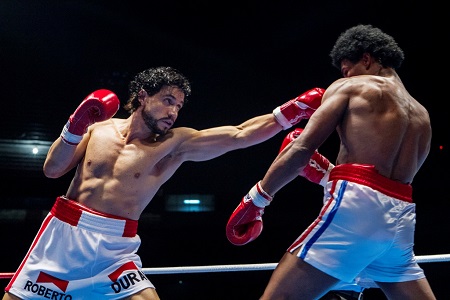 Which is a massive shame, because Ramírez was born to play Durán, De Niro is engaged and fully invested in the proceedings, the great Rubén Blades steals scene after scene as financier Carlos Eleta and, for the second time in two weeks, relative newcomer Ana de Armas knocked my socks clean off. Seriously, she’s arguably the best reason there is to sit through Todd Phillips’ otherwise regrettable War Dogs (although, if I’m being honest, Jonah Hill is pretty terrific in that one as well), and she’s even more explosively magnetic here. Her performance as Durán’s wife Felicidad is a delicately lively balancing act that travels through a multitude of emotions, the young actress commanding the screen every second she struts into the frame.

But, back to the two main stars, both Ramírez and De Niro are at the top of their respective games, neither one phoning it in as they go out of their way to explore the complex relationship between Durán and Arcel. There is a nice give and take between them that’s unforced, elegant in its pugilistic fortitude, the father-son dynamic that blossoms between them authentically endearing. Outside of the ring, these two hint at just how rich, how observationally insightful Jakubowicz’s movie potentially might have been, making me wonder if it’s not so much the filmmaker’s script in so much that it is his direction where the chief fault for the flick’s failure lies.

Because, fail it does. Raymond, a good actor when given the right material, might look the part of Sugar Ray Leonard, but the movie itself never gives him the chance to make the role his own. The dynamics between the two boxers never gels, doesn’t develop, their adversarial friendship just sort of taken for granted. On top of that, their two fights, the second of which ends in a manner that shocked the world and almost ended Durán’s career in a cloud if ignominy and shame, fall flat. The heat generated inside the ring is nonexistent, and as such there’s just no reason to care about who is winning or how coming up short affects the loser. There is a gigantic hole at the very center of things, and in a story about two of the best boxers of all-time going toe-to-toe the fact the boxing stinks is a pretty massive problem no actor, no matter how amazing their performance, would be able to overcome. 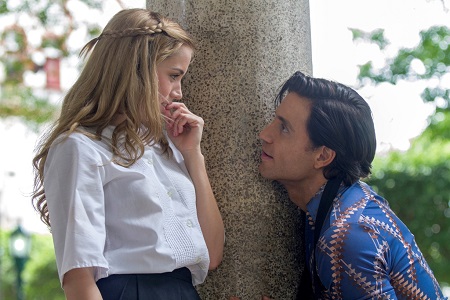 It’s easy to wonder what Creed director Ryan Coogler might have brought to the film, or how Martin Scorsese, if he could have been convinced to return to the ring alongside his Raging Bull star, might have put his own idiosyncratic spin on events. Heck, even last year’s otherwise lackluster Jake Gyllenhaal vehicle Southpaw featured boxing sequences that zipped with fury and brutal brio, director Antoine Fuqua’s kinetic fireworks giving the film an extra bit of spunk that made enduring the script’s ample melodramatic shortcomings almost worthwhile.

Unfortunately, Jakubowicz just doesn’t seem to have the first clue as to how to give any of this the sort of emotional zip Durán’s story calls for. His shifts in tone and focus are jarring, while his inability to give the numerous boxing scenes any semblance of life is utterly inexcusable. If not for the cast, and to a lesser extent composer Angelo Milli’s (Seven Pounds) superb score, it’s safe to say Hands of Stone wouldn’t land a single punch, making it the kind of biopic most viewers will want to say “no más” to before rushing off to watch something else.