Uneven I Do Not Without Its World-Weary Charms

Alice (Lake Bell) and Noah (Ed Helms) have been married just long enough for a sense of malaise to set it in. They own a small window blind business in Vero Beach, Florida that’s struggling financially, mom and pop shops like theirs not doing well in the current economic climate. Meanwhile, Alice’s free-spirited sister Fanny (Amber Heard) is in a pseudo-marriage with earthy artist Zander (Wyatt Cenac), the pair’s open relationship one they frequently tout as helping fuel their happiness. Then there is Cybil (Mary Steenburgen) and Harvey (Paul Reiser). While they’re not friends with either Alice or Fanny, the current state of their marriage will still impact both of the sisters and their respective relationships, all three couples having far more in common than they currently realize.

Why is that? It’s all thanks to British documentarian Vivian (Dolly Wells). She’s in Vero Beach casting her latest film, her new nonfiction opus all about marriage and how she feels it’s an old fashioned construct ready for a modern upgrade. Vivian does not believe long-term monogamy is either possible or healthy. In fact, she thinks relationships should be entered into the same way people go into a business transaction, maybe turn it into a seven-year contract with an option for renewal as long as both parties agree it’s in their mutual best interest to do so.

After knocking my socks clean off with her outstanding 2013 debut In a World…, I was eagerly excited to see what director/writer/star Bell had in store for me next with her superbly cast follow-up I Do…Until I Don’t. While nothing close to a sophomore slump, this nice, pleasantly diverting relationship comedy is still something of a minor letdown as far as the filmmaker is concerned. It’s slight, most of its observations about relationships, marriage, love and companionship obvious and routine. There’s just not a lot in the way of pizzazz or anything resembling a modicum of extra depth, and as such it’s hard not to walk away from Bell’s latest somewhat disappointed.

Still, when taken on its own modest terms this little ensemble comedy isn’t without its charms. The Cybil/Harvey storyline is particularly enjoyable, Steenburgen and Reiser displaying a worn, world-weary chemistry that fits their subplot nicely. The two seasoned pros appear to be having a wonderful time tossing off one-liners, getting underneath one another’s skin and doing whatever sort of absurdity it might be Bell has tasked for them to accomplish. They’re terrific, their meeting inside a rundown Florida diner for an impromptu dinner date giddily amusing for the pithy disdain and knowing indifference the two offhandedly toss back-and-forth. Yet, as unctuous and flat-out mean as their conversations can appear, thanks to Steenburgen and Reiser’s dramatic and comedic gifts I could still sense the love they once shared to be present right underneath the surface, the question as to whether or not Cybil and Harvey would figure this out for themselves one I definitely wanted to learn the answer to. 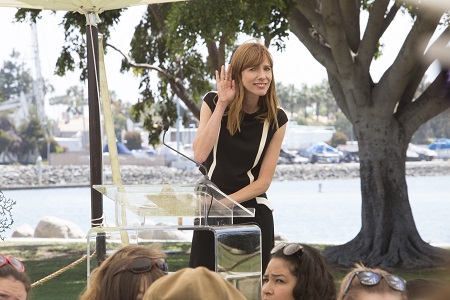 I just wish the solution to this and to so many other queries that Bell posits weren’t so obvious. It’s never in doubt what is going to happen to any of these three couples, and before the film was a third over I pretty much had it pegged as to where things were going to end up. It does not help that Vivian is not a well-crafted character, and as hard as Wells might try she steadfastly remains a one-dimensional colander originality and imagination flow through into the gutter far too easily. How everyone is going to eventually react towards her is a foregone conclusion, and the fact everyone but her seems to learn something important and meaningful about themselves is frankly annoying.

Yet Bell has talent, there’s no question about that. She handles actors magnificently, getting the best out of them even when the material itself isn’t always up to snuff. Bell is also unafraid to speak brutal, stark truths when the moment calls for them, finding humor in tragedy and pathos in merriment in ways that are continually inspiring. If I Do…Until I Don’t isn’t completely successful, that doesn’t mean it still isn’t without merit, and in the end becomes the type of small-scale independent comedy I could easily see myself warming up to more and more as time goes by.