Suburban housewife Laney (Sarah Silverman) loves her husband Bruce (Josh Charles) and adores her two children Eli (Skylar Gaertner) and Janey (Shayne Coleman) with every ounce of her heart. Underneath the surface, however, she’s suffering, refusing to take her bi-polar medication, instead retreating into a world of drugs, alcohol and clandestine sexual promiscuity with family friend Donny (Thomas Sadoski) to ease her psychological pain. But when her actions put her own kids in jeopardy Laney reaches for help, hoping counseling and rehab can put her back on track and return her to being the devoted wife and mother she desperately wants to be. 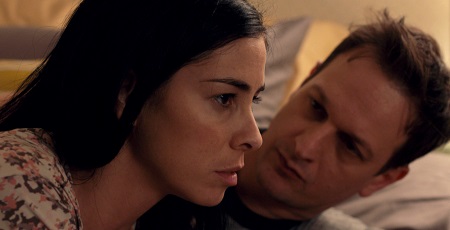 Adapted from Amy Koppelman’s best-selling book, with a script by the author and relative newcomer Paige Dylan, director Adam Salky’s (Dare) addiction drama I Smile Back doesn’t exactly break from Hollywood convention. Not a lot happens that’s unexpected, and a number of the conversations, especially the ones between Laney and her rehab therapist Dr. Page (Terry Kinney), a rather traditional. Yet the movie is mesmerizing most of the way through, Koppelman and Dylan’s script showing a kind of restraint that’s impressive, refusing to belabor any of its points or beat the viewer over the head with its messaging. More, it builds to an impressively nondescript finale, leaving things in an authentic state of emotional disrepair that’s devastating, forcing me to hold my breath as school lunches were prepared and a front door clicks potentially for the very last time.

All of which would be moot if Silverman weren’t up to the challenge of making it all work. Known more for her stand-up comedy than for her dramatic skills, nonetheless the actress knocks it out of the park, digging deep in order to mine psychological terrain that’s brutally and uncomfortably complex. Silverman believably plays up all of Laney’s sides with electrifying dexterity. Not for a single second did it cross my mind that this wasn’t a woman who wanted to be the best mother possible, held back by a condition that left her questioning all she knew as well as everything she held dear.

There are moments of deep, penetrating beauty to what Silverman accomplishes. A sequence near the end where she meets up with someone she hasn’t seen in decades (portrayed by veteran character actor Chris Sarandon) is perfect, his revelations about his life now compared to when he knew Laney as a child shattering in their cruel honesty. The way Silverman reacts, the differing emotions running across her face, all of it hits home, making what happens next all the more destructively riveting thanks to her magnificence.

The rest of the cast does what they can, but by and large they sadly disappear into the background. Charles, in particular, is a minor disappointment, and other than a scene where Bruce refuses to hear a confession from his wife he unconsciously already knows the actor rarely rises to the same magnetic level of his costar. The subplot revolving around Laney’s affair with Donny is also a minor letdown, and if not for a terrific moment of shock washing over Silverman via a startling, unforeseen revelation there’s little about this section that’s not exaggeratedly contrived.

All the same, Koppelman and Dylan’s screenplay does impress, the fact they’re more than willing to leave so many questions unanswered allowing the audience to put many of the pieces together for themselves cutting well against the grain. They understand Laney on a deeply personal, exhaustively intimate level, thus the place they leave her story at might not be heartwarming but it sure as heck ends up feeling real. I Smile Back might not rewrite the addiction or mental illness melodrama rule book but that doesn’t make it less affecting, Silverman’s spectacular performance alone making the price of a ticket well worth spending.