Subtly Devastating In This Corner an Animated Marvel

When 18-year-old artist Suzu Urano (voiced by Rena “Non” Nounen) is asked for her hand in marriage by the kindly Shusaku (Yoshimasa Hosoya), it’s an offer she knows she cannot refuse. It is 1944 and war is raging around the world, so leaving her family in Hiroshima to go live with a brand new one in the small town of Kure is going to be hard. But Suzu rises to the challenge, moving away from home to be a protective daughter-in-law to Shusaku’s parents Entarou (Shigeru Ushiyama) and San (Mayumi Shintani) while also falling in love with new niece Harumi (Natsuki Inaba) and doing what she can to convince the hard-hearted girl’s mother Keiko (Minori Omi) she only wants to be her friend. 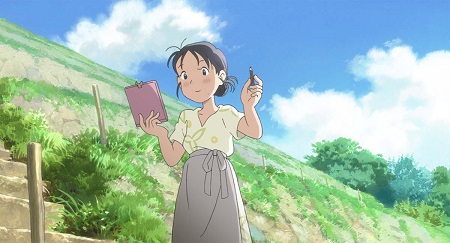 There’s not a lot more to writer/director Sunao Katabuchi’s (Princess Arete) gorgeously animated, delicately poignant adaptation of author Fumiyo Kono’s award-winning Japanese manga In This Corner of the World, but that doesn’t mean there isn’t still a great deal going on. An examination of families doing what they can to survive the ravages of war during a time of great upheaval, this is a spirited movie filled with honest emotional nuances that held me captivated for the majority of the picture’s 129-minute running time. Suzu’s story is deeply affecting on a level that’s oftentimes staggering, and even though it shouldn’t come as any sort of surprise as to where all of this is headed, that doesn’t make the getting there any less of an achievement.

It can all be difficult to watch at times. While understandable, the level of tragedy as it pertains to Suzu’s life and that of her family, not just in the constantly bombed Kure but naturally also back in Hiroshima, can be difficult to stomach, especially a rather startling third act twist that broke my heart to pieces long before the events of August 6, 1945 could come to pass. Some of this feels downright assaultive, the staggering devastation and loss of life, and the way in which survivors have to find a way to pick up the pieces and carry on, hopefully with a smile on their face as they rebuild their sense of community, can feel rather relentless and as such isn’t necessarily all the enjoyable.

But Katabuchi’s sympathetic, sentimentally subtle touch is inspiring in its breadth and scope. How he presents Suzu, the way he weaves each moment of her life into its monumental whole, all of it is masterful, this character popping off the screen as a living entity and not just some random animated creation with some humdrum story to tell. No, this young woman’s fight, what she believes in, how she chooses to look at life and the way she is determined to overcome the unimaginable, all of it resonates, the tears I cried during the film’s final half hour as genuine as they were appropriate.

There were things I didn’t respond to. It took forever for the movie to reveal why Keiko was so resolute in keeping a frigid distance between herself and Suzu, while the main character’s bouts of absent-minded daydreaming weren’t always utilized in a manner I personally felt helped the narrative move closer to its predetermined destination. I also admittedly had trouble differentiating between the young woman’s husband Shusaku and a former schoolmate-turned-soldier named Tetsu (Daisuke Ono), the two so interchangeable neither is ever able to develop as characters in the same way I’m pretty positive they must inside Kono’s source material. 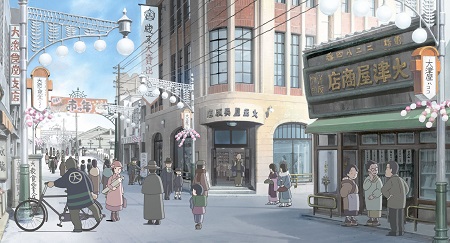 Yet, there’s so much I just adored about this gem of a feature those missteps hardly feel worth mentioning. So many sequences and scenes burned their way into the center of my psyche with astonishing ease, not the least of which is the way the events at Hiroshima are depicted, a sudden flash of light way off in the distance startling Suzu and her in-laws but not so much they have any comprehension of what it is that’s just transpired. There’s also a number of additional little moments, including one between our heroine and Tetsu where white-capped waves transform into watery fields of bouncing bunnies and another where a determined child discovers safety in the arm of a stranger while later on a grieving mother realizes the clothes of a departed loved one can now be used to protect and nurture someone new, each moving me in a way I found continually marvelous.

In a world being ripped apart by violence, hatred, racism and bigotry, the genius of this piece of animated art is how it manages to put a historical tragedy of unimaginable proportions into a perspective that’s just as much about today as it is the events swirling around Japan during the latter stages of WWII. Perfectly animated, emotionally pure, In This Corner of the World is an outright marvel, watching it come to life as it does with such authentically subtle exactitude an extraordinary achievement to be sure.