In a year when The Huntsman: Winter’s War (which I admittedly enjoyed), My Big Fat Greek Wedding 2, Alice Through the Looking Glass, Now You See Me 2 and Zoolander 2 already exist, it’s quite possible that Independence Day: Resurgence might take home the prize for being 2016’s most pointless sequel. Set twenty years after the events of the first film mainly because it took that long for 20th Century Fox and returning director Roland Emmerich to find a scenario they all were happy with, the movie is so caught up in trying to manufacture the same sort of rousing, go-for-broke sensationalism as its predecessor it forgets to generate much in the way of honest human emotion. Not so much bad as it is boring, the sequel is a lot of sound and fury that adds up to precious little, everything building to a ho-hum climax that’s nothing more than a glorified cliffhanger for a potential third adventure. 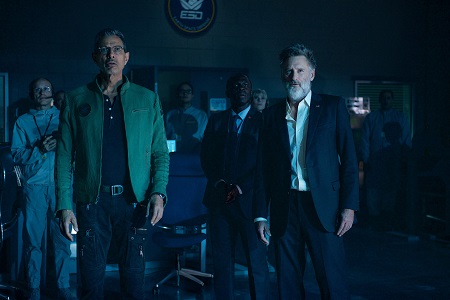 A couple of days before the July 4th holiday, the only alien ship not to crash down to Earth but instead land safely has mysteriously turned itself on. Sent by President Landford (Sela Ward) to investigate, David Levinson (Jeff Goldblum) quickly comes to the realization that their planet’s invaders are preparing for another attack. Heading to the moon with reckless fighter pilot Jake Morrison (Liam Hemsworth) where he’s certain he’ll find answers to questions he previously didn’t know to ask, they search the wreckage of another alien vessel for a mysterious component that could potentially stave off a second invasion.

What he doesn’t know is that time is far shorter than any realize, and twenty years to the day of the first assault a new mothership arrives, this time carrying an alien queen. With former U.S. President Whitmore (Bill Pullman) leading the charge, his equally heroic daughter Patricia (Maika Monroe) standing confidently by his side, humanity readies to reunite once again to vanquish this common foe. But the aliens have new tricks up their sleeve, and if Earth barely survived the last go-around with this foe the chances of anyone surviving this time out have to be practically zilch.

The script feels as if it were constructed in committee, and with five credited writers (including Emmerich and frequent collaborator Dean Devlin) this is hardly surprising. The sequel is so beholden to the first film it never manages to come up with an identity of its own. It has trouble overcoming the absence of Will Smith’s Captain Steven Hiller (Jessie T. Usher is saddled with the unenviable task of portraying his son, Earth Defense Force Captain Dylan Hiller), none of the new actors are able to generate close to the same sort of charisma or charm. As for Goldblum, as welcome a presence as he is, his wide-eyed, awe-shucks form of intellectual heroism isn’t nearly as endearing this time, and there are many moments where it feels the screenwriters have shoehorned him into events for no other reason than they think audiences won’t be interested unless he’s around.

The rest of the holdovers? Pullman gets to deliver another speech, the late, great Robert Loggia makes a brief appearance and, for some inexplicable reason, Judd Hirsch gets to save a school bus full of kids, a gaggle that includes up-and-comer Joey King. Brent Spiner is the sequel’s main source of comic relief as the resurrected Dr. Brakish Okun. Oddly, he’s also the one who deliver’s the film’s only effective bit of emotional resonance, his reaction to a key assault on the interior of Area 51 surprisingly authentic. As for Vivica A. Fox, she’s back as well, and even though her character Jasmine Hiller is thankfully no longer a stripper I can’t say Emmerich and company treat her any better here than they did in the 1996 original, and one hopes she got a hefty paycheck for her efforts. 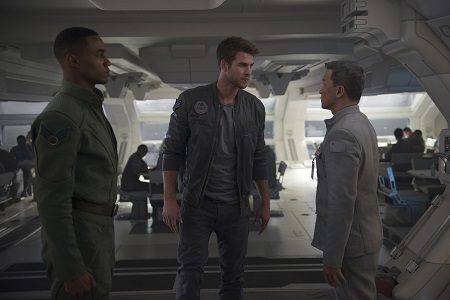 At a reported cost of somewhere just under $200 million, it all looks as spectacular as one would hope it would, the aerial battles and land assaults as eye-popping as ever. Additionally, I appreciate that Emmerich keeps the majority of the disaster porn elements to a minimum (London taking the main brunt of the carnage), understanding audiences have been there and done that so often since the first Independence Day they’re starting to grow a little tired of it all. More, as an action director he’s always been aces, and say what you will about the quality (or lack thereof) in regards to his overall oeuvre, even total disasters like 10,000 BC and his 1998 take on Godzilla are still expertly composed from a visual standpoint.

Sadly, there just isn’t any reason to care. As beautifully as cinematographer Markus Förderer (I Origins) shoots it all and as handsomely as editor Adam Wolfe (White House Down) has cut things together, there’s little going on inside of this adventure that ever got my pulse even close to racing. Even big moments where someone makes an ultimate sacrifice for the greater good fall flat, everything so perfunctory and by-the-numbers it all just becomes monotonous. The characters and their travails rarely, if ever, connect, and as such Independence Day: Resurgence is a handsomely produced, energetically paced waste of time that arguably never should have gone into production in the first place.