Into the Storm looks incredible inside the confines of a movie theatre. Better, it’s proof you don’t need a pointless 3-D upgrade to create masterfully composed sequences of special effects-driven spectacle, suspense and terror. Same time, as nice as all of that is, as commendable as these things might be, there’s no doubt this is the type of B-grade disaster silliness that will play perfectly fine – if not better – at home where expectations are more moderate and expenditures are far less.

Sure the movie looks terrific. Yes it has some wonderful moments. But on the whole this is still nothing more than an exceedingly dumb, cliché-ridden enterprise where every story point is telegraphed and every emotion showcased to melodramatic excess. While director Steven Quale (Final Destination 5) maintains a firm grasp on all that’s taking place, while John Swetnam’s (Evidence) script is no better and no worse than most higher profile entries in the disaster genre, Into the Storm is still nothing more than Twister for the SyFy Channel generation, that comparison not exactly meant as a compliment.

Not that I have anything against Jan de Bont’s 1996 smash with Bill Paxton and Helen Hunt. But, seriously, is there anyone out there who has watched that movie within the past few years and wondered to themselves how that Mother-Nature-run-amok thriller became such a gigantic box office sensation? I mean, this is a movie where the female lead seems to believe that tornados are personally hunting her and her family as if they were the shark from Jaws, for goodness sakes, everything culminating in a series of coincidental absurdities so extreme they’re hysterically beyond belief. 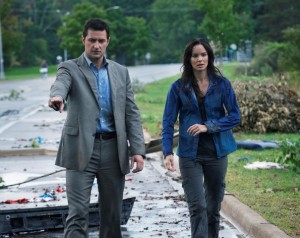 So trust me when I say Swetnam’s main plot points are even more ludicrous and eye-rolling than anything found in Twister (sans the flying cows) that I know what it is I’m talking about. We get flaming tornados of death, a reenactment of the Ed Harris-Mary Elizabeth Mastrantonio CPR scene from The Abyss, two dudes recreating every unfunny Jackass stereotype Johnny Knoxville ever invented (and might now regret after seeing this), and the sudden disappearance of the film’s only minority cast member because, well, honestly I’m still not exactly sure why. A fleet of 747s takes to the sky sans their pilots yet don’t seem to fall back to Earth, while a high school vice principal showcases bouts of superhuman strength every time he’s forced to make sure the sexy meteorologist he’s only just become acquainted with doesn’t get sucked up into a swirling vortex.

But, seriously, anyone walking into this movie expecting anything less than what’s already been described should probably have their head examined for some kind of cognitive failing. Into the Storm was never going to be some smart, realistic take on climate change or the challenges faced by those living in the Midwest forced to endure tornado seasons that only seem to get more powerful and devastating with each passing year. Quale and Swetnam were not going to be given countless millions from Warner Bros. and New Line to make an ultra-realistic documentary. This film was always going to hopefully be something better than your typical disaster potboiler airing on that aforementioned cable television network every other weekend, and on that front it is a minor success.

None of which means the movie is any good, but if we’re judging on the Irwin Allen scale of disaster movie excess this one leans more towards The Towering Inferno end of the spectrum (just barely) than it does to the When Time Ran Out… side of things. If we use the Roland Emmerich weighbridge, than we’re talking something more similar to 2012 than to The Day After Tomorrow (on a much, MUCH smaller magnitude, of course; the world isn’t ending here, after all). As far as those SyFy Channel comparisons are concerned? Well, let’s just leave those be, because even though this is of a much higher caliber than anything the network crafts for itself that doesn’t mean it isn’t likely to become part of the weekend rotation at some point in the relatively near future.

Plot? What plot? Swetnam’s scenario mixes found footage and faux first-person documentary styling with a relatively straightforward tale of a single father, Gary (Richard Armitage), that high school administrator I talked about earlier, running around his town in a valiant quest to protect his two teenage sons Donnie (Max Deacon) and Trey (Nathan Kress) as all sorts of meteorological mayhem is unleashed upon his tight-knit community. His story is juxtaposed alongside that of storm chaser Pete (Matt Walsh) and his crew, which includes sexy weather expert Allison (Sarah Wayne Callies), as they attempt to document the most savage and horrific storm system they’ve ever had the good fortune to stray into the middle of. 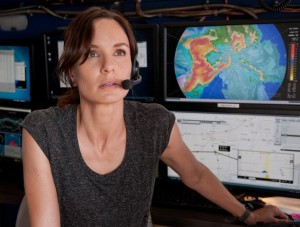 Anyone who watched Final Destination 5 knows Quale can handle mayhem and carnage with the best of them, that film’s bridge disintegration opening sequence sensationally terrifying yet also oddly exhilarating. It goes without saying the tornado sequences are outstanding, CGI-enhanced destruction porn disaster enthusiasts are going to go bonkers for. Same time, even anticipating how melodramatic a lot of this is going to be going in, that doesn’t make the interpersonal stuff between the various characters any less annoyingly heavy-handed. More, just about all the actors in this have given quality performances in the past (Armitage and Callies, in particular) yet all are hamstrung by the narrative lunacies at the center of the proceedings, Quale seemingly unable to find a way to help them out so that they don’t look emotionally helpless.

Not that this matters too terribly much. While I can’t really recommend paying to see Into the Storm while it’s in the theatre I certainly can’t begrudge anyone with a fondness for this sort of entertainment from doing so all the same. The movie really is Twister for this generation, and while I’m positive the stratospheric box office results won’t be nearly the same that doesn’t mean it still isn’t carrying abnormally similar positive-negative storytelling baggage. Whether this is a good thing or bad I leave up to you.