Jason Bourne (Matt Damon) has stayed off the grid for the past nine years, traveling here and there, eking out a living any way he can. It’s how he wants it, to be left alone, not wanting to think about the chaos and the carnage that ripped the life he knew away from him and the devastation he brought forth against his foes to see the scales of justice balanced. Now all this former spy and assassin wants is to be forgotten, to enter the dustbins of history as an afterthought or asterisk never to be thought of again. 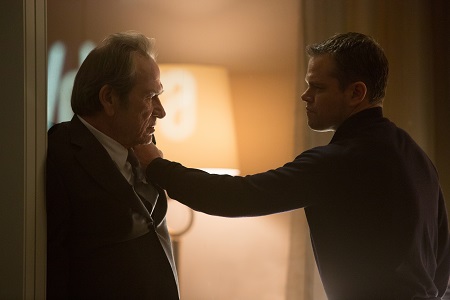 This isn’t going to happen, especially when one of Bourne’s former handlers, Nicky Parson (Julia Stiles), arrives in Greece looking for him holding stolen top secret data lifted directly from the CIA’s server in Langley. Whether inadvertently or on purpose, she’s put him once again in the middle of a conspiracy that’s as far reaching and as ominous as it is deadly, the current director of the agency Robert Dewey (Tommy Lee Jones) particularly keyed up about the prospect of plopping his former employee in an early grave. He’s aided by an upstart agent, Heather Lee (Alicia Vikander), the young woman a programming genius eager to make a name for herself with the powerbrokers at the White House and with the Pentagon by capturing Bourne.

Both director Paul Greengrass and actor Matt Damon stated on multiple occasions it would take some kind of special story for either of them to return to author Robert Ludlum’s world of international spies, labyrinthine intrigue and political conspiracies so complex the fate of the world would be in jeopardy if they ever came to pass. Even though the story started in 2002 with Doug Liman’s The Bourne Identity, it was the double-whammy of espionage awesomeness The Bourne Supremacy and The Bourne Ultimatum that made the character matter, Greengrass and Damon crafting pitch-perfect action epics that rank as two of the finest arguably ever made.

Universal tried to keep the story going with The Bourne Legacy in 2012, franchise screenwriter Tony Gilroy taking over the directorial reins as he attempted to showcase what was going on with other spies and inside other agencies at the same time Jason Bourne was wreaking havoc on the CIA. The movie, revolving around another enhanced spy, portrayed by Jeremy Renner, and a brilliant scientist targeted for assassination, played by Rachel Weisz, was perfectly fine in and of itself even if it admittedly paled in comparison to its predecessors. Still, the box office take, while respectable, wasn’t astronomical, and as such the studio decided to pull out all the stops in hoping they could convince Greengrass and Damon to return for another adventure.

I really wish they wouldn’t have. Working from a script cobbled together by the director and frequent writing partner, and this film’s editor, Christopher Rouse (Captain Phillips), it’s not so much Jason Bourne is a bad action-adventure as it is a pointless one. If this is the special story Greengrass and Damon were talking about in regards to their demands that had to be met before they’d return, I’d hate to see the ones that didn’t pass muster. Honestly, while there are a number of potentially interesting ideas in regards to digital surveillance and governmental intrusion into a citizen’s everyday life, the movie rarely, if ever, does anything interesting with any of them. On top of that, the basic reason for Bourne’s return revolves almost entirely around his unresolved daddy issues, and considering everything he went through and battled in the original trilogy this feels slightly inconsequential in comparison.

The biggest failure is the construction of the supporting players. The hallmark of the originals, including The Bourne Legacy, is that no matter how small the character, each movie went out of its way to make them three-dimensional, to give them a reason that allowed them to live and breathe inside this world that felt authentic. Here, that isn’t the case. Dewey has a plan and is doing Very Bad Things, but he’s doing them in a way that makes him sound more like a Bond villain from the 1970s than they do anything else. He’s also covering up past misdeeds in about the worst way possible, bringing in a lethal agent to assist him who just happens to be one of the few who could make Bourne even more driven to see them all destroyed then he was before be discovered pummeling fight club opponents in Greece and sent back on the run from authorities. 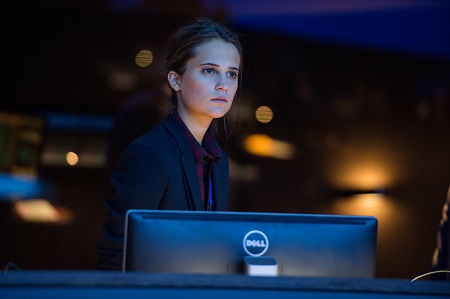 Which is better than can be said for Vikander’s Heather Lee. Who she is, why she makes the decisions she does, none of it makes a single lick of sense. There are veiled hints that she is connected to Bourne somehow, but those are thrown out and never thought of again almost as soon as they are hinted at. Same goes as it pertains to her relationship with Dewey, and it’s never entirely clear whose side she is one. It’s obvious Greengrass and Rouse want to play things close to the vest as it pertains to her, desire to reveal additional secrets if another film comes down the pike. Problem is, Lee is so nondescript, so ephemeral, she barely exists at all, recent The Danish Girl Oscar-winner Vikander visibly struggling as she attempts to make this woman someone worth being interested in.

It’s not a total loss by any stretch of the imagination. Greengrass, in some corners considered the inventor of the “shaky cam” phenomenon that came close to destroying the action film, reminds viewers why so many found it a good idea to copy his visually compulsive aesthetic after The Bourne Supremacy and The Bourne Ultimatum. Working in divine synchronicity with cinematographer Barry Ackroyd (The Hurt Locker) and his editor Rouse, their a kinetic fluidity to the fight sequences and car chases that’s every bit as mesmerizing now as it ever was in those previous motion pictures. It’s impossible not to feel energized by some of what happens, and, like every film in the series, action fuels character and character fuels action, both so intimately intertwined neither could exist without the other.

Damon still owns this character, and from the first moment we see him again it took all my self-control not to let out a tiny little yelp of joy. But the real scene-stealers prove to be Riz Ahmed as a wunderkind programmer with mysterious ties to Dewey and veteran French superstar Vincent Cassel as an assassin who has very good reason for wanting to see Bourne dead. They two of them manage to overcome the script’s shortcomings, making their characters, not just memorable, but essential, and it’s hard to not to wonder just how much better the movie might have been had Greengrass and Rouse given them just an ounce more to do.

But the longer I think on Jason Bourne the more it starts to upset me. While the technical components are strong, while it’s wonderful to see Damon back in the spy-versus-spy game, while Greengrass could direct a story like this in his sleep and probably still make it breathlessly fascinating, the script’s inability to do anything of interest, or for that matter worthwhile, is just plain frustrating. There’s just no depth here, no reason for all the carnage, and if this truly was the best all involved could come up with in order to revivify the franchise then maybe they shouldn’t have bothered, Bourne’s resurrection sadly nothing to get excited about.