It’s December 23, and Max Engel (Emjay Anthony) isn’t happy. Not only is he belittled by his schoolmates thanks to his unwavering belief in Santa Claus, his older sister Beth (Stefania LaVie Owen) finds it pretty darn silly as well. He’s also noticed that his parents Tom (Adam Scott) and Sarah (Toni Collette) are having difficulties, and while neither of them say so out loud to him the signs of their marital dysfunction are obvious. Only Grandma Omi (Krista Stadler) can see what Max is going through, quietly urging him in her native German tongue to keep his Christmas spirit intact no matter how horrible things might on the outside appear. 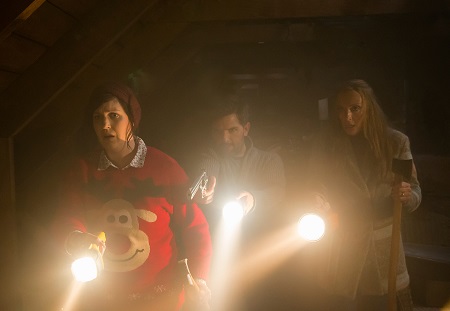 This proves impossible with the arrival of Aunt Linda (Allison Tolman) and her bellicose and belligerent husband Howard (David Koechner). Not only do they get on his parents’ nerves, they’ve also brought along his cousins Howie Jr. (Maverick Flack), Stevie (Lolo Owen) and Jordan (Queenie Samuel), all of whom love badgering and playing pranks on their impressionable relative. Throw in the presence of Great Aunt Dorothy (Conchata Ferrell), a notorious boozehound if there ever was one, and the stage is set to ruin Christmas all but good, Max so distraught by it all he’s tempted give up on his family – let along this holiday – once and for all.

Back in 2007, veteran screenwriter Michael Dougherty (Superman Returns, X-Men 2) made his feature directorial debut with the horror anthology Trick ‘r Treat. The film was unceremoniously dumped by Warner Bros, almost as if they had no idea what to do with it, barely releasing it before shuffling it off to DVD and Blu-ray with zero fanfare whatsoever. Funny thing? Movie was terrific, and over time it’s garnered a substantial cult following, one large enough that there’s talk of a sequel, one the filmmaker hopes to get into production soon.

With that being so, it should shock relatively few that his second directorial effort, the Christmas-themed horror-comedy Krampus, is wonderful, this freaky Yule tide frolic an insidious creature-feature that plays out like the devilish lovechild spawned from the mating of Gremlins and National Lampoon’s Christmas Vacation. Dougherty, working with fellow screenwriters Todd Casey and Zach Shields, has composed a gem of a thriller, crafting a genuinely entertaining rollercoaster of suspense, tension and laughter that only gets better as it moves along. It builds to a final scene genre aficionados will uneasily chuckle over as if they were insane, the closing sequences an ingenious melding of “The Twilight Zone,” It’s a Wonderful Life and A Christmas Carol bordering on divine.

It all revolves around a demonic force, an anti-Santa Claus, that does not take kindly to Max giving up on his Christmas spirit, even for a passing second,  and decides to give him exactly what it was he momentarily wished for. But, as the old proverb says, one better be careful making careless wishes because they just might come true, this supernatural creature eager to pick off all those gathered in the Engel family home one-by-one, eager to drag them off into the underworld as punishment for forgetting the true meaning behind the holiday.

Beautifully shot by Jules O’Loughlin (Wish You Were Here), featuring crackerjack production design by Jules Cook (Chappie), the real star are the superb practical creature and puppet effects, Dougherty pulling from a bag of visual tricks Joe Dante, John Carpenter and John Landis would likely stand up and applaud. Better, he takes his time unleashing them, using the viewer’s imagination as his primary weapon of anxiety. He keeps the focus on the creepy situations at hand, the characters’ growing terror planting seeds that will grow into solid thrills and chills later on.

But what makes the film work is that Dougherty refuses to play things as farce, doesn’t allow the actors to take any of their characters into the realm of larger-than-life superficiality. Sure, Howard is an uncouth oaf but he’s actually also a solid family man who adores his wife and passionately loves his children, the mistakes he’s made ones he’s somehow learned to live with. As for Tom and Sarah, they know their marriage is in trouble, but they equally understand what it is going to take for them to find a way to fix it, and while the fight will be difficult and long it is also one they are starting to realize they are willing to wage.

The same could be said for everyone trying to survive until Christmas. All have their flaws. Each battles their own insecurity. Yet, at the end of the day, when all is said and done, they’re still a family, and as such they’re willing to do whatever it takes to keep one another safe. When one of their own is absconded with by the devilish creatures knocking at the door there is real weight to the loss, and as such I found myself becoming more and more invested in the outcome as things progressed towards a conclusion.

There are moments of stupidity, to be sure, twins Stevie and Jordan falling for an exceedingly obvious trick that had me rolling my eyes, while Howie Jr. hungrily reaching for a sugary snack that had mysteriously appeared as if out of thin air is dumb with a capital “D.” Yet somehow Dougherty manages to make these sequences work far better than they have any right to, mainly because the reactions on the parts of the parents are so heartbreakingly genuine. The tension that rises as each of them slowly but surely falls to the pesky demons assaulting the house is palpable, all of which makes Max’s understanding of the situation and what it will take to stop it all the more rousing.

Krampus is a naughty little movie, and I mean that in a good way, and once again Dougherty proves himself to be crafty genre-bending filmmaker willing to make old school high-concept thrillers the likes of which studios are now reticent to put into production. As Christmas miracles for horror fans go, this is one stocking stuffer certain to be enjoyed for many years to come.