Latest Tarzan Dangles from a Vine of Pointless Indifference

The good news in regards to director David Yates’ (Harry Potter and the Deathly Hallows) African adventure The Legend of Tarzan is that it doesn’t spend a heck of a lot of time going through the famous character’s backstory. Instead, screenwriters Adam Cozad (Jack Ryan: Shadow Recruit) and Craig Brewer (Black Snake Moan) make the assumption most, even if they’ve never read any of Edgar Rice Burroughs’ novels or have seen any of the countless cinematic incarnations (ranging from Johnny Weissmuller, to Christopher Lambert, to an animated Disney version, to numerous additional takes in-between), already know who Tarzan is and what it was that made him that way. While flashbacks to the death of his parents and his being raised by a pod of apes are present, by and large the writers allows the viewer to fill in the blanks all on their own, thus making sure the bulk of the tale’s running time is spent on the central story at hand and precious little else. 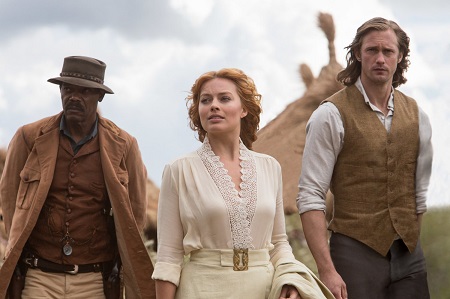 While technical aspects are strong, especially as they pertain to the motion capture effects utilized to bring the African beasts running through the jungle to life, sadly this is the end of the good news. Even though Yates is able to stage some solid chase sequences, while Henry Braham’s (Nanny McPhee) cinematography is lush and electrifyingly alive, none of this is enough to compensate for just how unremarkable this adventure proves to be. Anemically by-the-numbers, blandly plotted to the point excitement becomes nothing less than an endangered species, watching this movie is a shockingly dull way to spend a couple of hours, and I have trouble believing even if I’d seen it as a child I still would have cared whether or not this Lord of the Apes would save his lady-love while also making sure his beloved Africa was not destroyed by unscrupulous European invaders.

British Lord John Clayton (Alexander Skarsgård), known the world over as Tarzan, is invited by Belgian King Leopold II to revisit his former home in the African Congo, ostensibly to see all of the good his regime is claiming to be doing there. But American George Washington Williams (Samuel L. Jackson) believes otherwise, convincing Clayton it is worthwhile to return to the place of his birth and see what is happening to the indigenous peoples residing there for himself.

So with wife Jane (Margot Robbie) joining them, the two men set out on this adventure. But things are far from what they’ve been told, the dastardly mercenary Leon Rom (Christoph Waltz) fooling Clayton with an offer from King Leopold in order to fulfill a bargain with warlord Chief Mbonga (Djimon Hounsou). His people rule a secluded land sitting on top of a gigantic diamond mine, and in order for him to grant the Belgians access to it he wants Tarzan’s head on a spike. Rom intends to give it to him, and in doing so unleash a terrible genocidal plague across the African continent the likes of which the world has never seen before.

That all actually has the makings for a pretty solid adventure, and one I’d like to think Yates is more than capable of bringing to life. But the movie never finds its dramatic feet, lurching around uncomfortably as it desperately tries to romanticize its Caucasian hero without belittling or marginalizing the Africans, whose continent it obviously is, in the process. Yet this line proves to be impossible for the filmmaker or his screenwriters to be able to walk upon, and even by adding Jackson to the mix as an American haunted by his days hunting Native Americans in the western frontier, the story’s inherent “White Savior” problem still bites them all in the butt all the same.

Even so, that’s not the most obnoxious or glaring issue. The simple truth here is, The Legend of Tarzan just isn’t any fun. It’s all just so mundane and pedestrian, maintaining interest for anything longer than a couple of minutes proves to be an almost insurmountable chore. If I’d have been at home watching this play out on television it is likely I’d have either turned the channel or fallen asleep, the latter the more likely outcome. The story wanders around with little to no urgency, and even after Rom gets his hands on Jane in order to trick Tarzan into saving her, I honestly could have cared less if the two jungle love birds ever got back intertwined within one another’s loving arms.

Skarsgård looks terrific, his abs doing almost all of his talking for him, and Jackson is in fine, if familiar, form as his new compatriot tromping through the jungle right alongside him. Robbie is maybe the best of the central trio, adding a spunky, energetic element to the proceedings that’s absent whenever she isn’t around. Problem is, even though her character proclaims herself to be anything but a damsel in distress that is exactly what Jane turns out to be, Tarzan’s beloved pretty nothing more than fetching eye-candy he has to go to ever-greater extremes in order to save.

It does not help that Waltz, for all his talent and charm, phones in his villain, and other than a couple of novel turns of phrase that almost feel as if they were lifted from Django Unchained or Inglourious Basterds, the majority of the time he looks incredibly bored. Which is more than can be said for Hounsou, the two-time Academy Award-nominee once again stranded with a one-dimensional heavy that’s as stereotypical as it is a waste of talent. The actor deserves better, no question, and the fact Hollywood seemingly refuses to make good use of him is a travesty of monumental proportions.

There is a pretty good fight between Tarzan and one of his simian family members; and a flashback showcasing what happened to his mother while he was still a young man learning the ways of the jungle is overflowing in the kind of emotional maturity and intimate complexities the rest of the picture is sadly lacking in. But the final battle itself is a shocking letdown, a sound and fury onslaught that represents nothing long-lasting or substantive. The Legend of Tarzan isn’t so much bad as it is forgettable, Burroughs’ iconic character left dangling from a vine of pointless indifference the likes of which he’s never had the misfortune to grapple with until now.