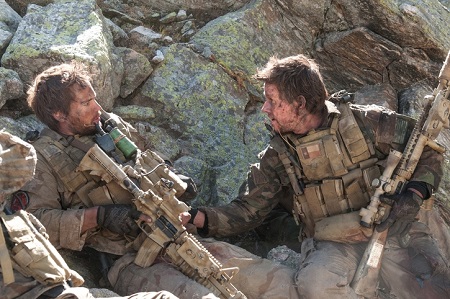 The team finds him, but he is not supported by a handful of soldiers but instead a whole legion of them. Worse, Murph and his unit, Leading Petty Officer Marcus Luttrell (Mark Wahlberg), Sonar Technician Second Class Petty Officer Matthew Gene “Axe” Axelson (Ben Foster) and Gunner’s Mate Second Class Danny P. Dietz, Jr. (Emile Hirsch), have stumbled on a trio of goat herders and are suddenly faced with a crippling moral dilemma. Kill them, even though they’re innocent, and their hiding place, as well as the mission itself remains secure. Let them go, do the morally correct thing, and not only is their immediate safety jeopardized but the task itself becomes impossible, a known terrorist allowed to go free thanks to the unexpected arrival of a trio of farmers.

It’s no secret what happens next, the title of the film giving that away. But based on Luttrell’s best-selling memoir, co-written with Patrick Robinson, Peter Berg’s Lone Survivor is easily the actor-turned-director’s best effort yet. The Friday Night Lights and The Kingdom filmmaker takes things to a new level with this thought-provoking, emotionally complex saga of sacrifice, brotherhood and heroism. While the tragic aspects are never in doubt, while many of the central dynamics are hardly heartwarming, the movie nonetheless remains an inspiring marvel of courage and humanism speaking to the very best of who we all wish we could be.

Not that this makes any of what transpires easier to watch. Once the SEAL unit makes the decision to release their captives and from the moment the bullets start to fly my throat was in my gut and there was never a doubt it was going to stay there until the bitter, tragically complex end. Berg refuses to let the audience off the hook, doesn’t let us shy away from the violence or sacrifices being showcased, and much like Ridley Scott did with Black Hawk Down and Kathryn Bigelow managed with so many aspects of Zero Dark Thirty he gives the audience a bird’s eye look into military darkness and despair rarely glimpsed by civilian eyes.

The core ensemble is terrific, Wahlberg, Kitsch and Hirsch digging inside their real life personas full-bore freeing themselves from artifice. There is no move star glamor in what they are doing, no attempt to sensationalize aspects of their personas. Best of all, they refrain from making any of their characters saints devoid of flaws or frailty, instead showcasing them as they were, intent on laying it all on the line for the man next to them giving everything for a cause greater than themselves in the hope that, if they don’t survive, the brother fighting alongside them hopefully will. 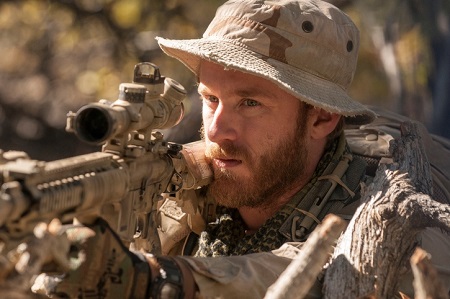 Then there is Foster. This is the actor’s second superlative performance of 2013 (the first coming in the Midwestern crime-noir Ain’t Them Bodies Saints), and it’s either deeply disappointing or a testament to the strength of the year’s acting triumphs that his name hasn’t been bandied about in the Best Supporting Actor conversation. There is a ferocious complexity to Axelson that comes as a surprise, Foster deftly exploring all of his idiosyncrasies in the briefest brushstrokes. His disagreements in regards to what the unit should do with the farmers does not stop him from having any acrimony towards what transpires, the actor embodying things with ease in a way that feel intimately vigorous.

For those unfamiliar with the mission and what happened I’m not going to go into great detail as to how Luttrell survived to recount his and his SEAL team’s actions. Just know that this isn’t just their heroic story but also one that celebrates the Afghani people and culture. What could have been nothing more than a jingoistic parable of U.S. moral superiority even in the face of unforeseen, maybe unavoidable, tragedy becomes something much more satisfying. Berg, while not shying away from the rah-rah nature inherent to many of the film’s more basic elements, doesn’t revel in them, either. He instead looks at things with an objective lens allowing the most important themes to come to the forefront with clarity even when the cluttered, frenzied atmosphere of chaos and bloodshed threatens to overwhelm things.

I can’t say Berg avoids all his action filmmaker trademarks, a pair of mountainside dives too reminiscent of The Rundown for my taste, while a couple of slo-mo shots feel like he’s still on the deck of the ill-conceived Battleship. But overall this is a giant leap into the first tier for the director, make no mistake there, Love Survivor not just a touching testament to the soldiers who fight and die for the country they love but also a rousing aria speaking to the better angels all over the world hoping to make it a better place to live for each and every one of us.