Asked to come to Paris by her beloved Aunt Martha (Emmanuelle Riva), a former dancer currently waltzing away from nurses and doctors intent on placing her in a retirement home, Canadian librarian Fiona (Fiona Gordon) grabs her gigantic bright red backpack and quickly makes her way to Europe. Once she gets there things quickly spiral out of control leaving her literally wet behind the ears. If losing all her identification, money and belongings wasn’t bad enough, it also turns out that Martha herself is missing, maybe even dead. With only a flibbertigibbet homeless man named Dom (Dominique Abel) to assist her, Fiona makes her way through Paris in a desperate search for her Aunt, never losing an ounce of the hope in her heart as one catastrophe after another is arbitrarily tossed in her direction. 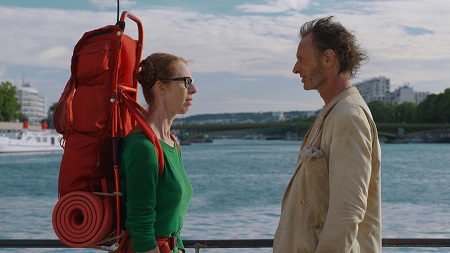 From the minds of idiosyncratic filmmakers Gordon and Abel (The Fairy, Rumba), the pair’s latest absurdist frolic Lost in Paris is as close to a modern Jacques Tati comedy as any I am likely ever to see. Blatantly calling to mind that French genius’ finest works like Monsieur Hulot’s Holiday or Mon Oncle, this comedy is a whimsical whirligig of nonsense and insight, real life and fantasy crashing into one another with witty abandon. It’s a joyous lark, and while character development is minimal, the gleefully ridiculous ebullience of the narrative is so intoxicating one almost doesn’t notice there’s precious little in the way of substance to any of the lunacy.

Almost. It did take me a little time to get into the swing of what Gordon and Abel were doing, and as talented as the filmmakers might be they struggle to maintain a consistent comedic tone. Also, unlike Tati their stabs at delivering any sort of social or political commentary rarely hit their targets, and as such the level of emotional authenticity that films like Playtime always seemed to manufacture with such effortless ease seldom materializes here. Instead, it all plays like a series of expertly staged vignettes working towards a common goal, the connective tissue holding these scenes together so tenuous it’s a moderately large surprise things end up working near as well as they ultimately do.

It certainly helps that both Gordon and Abel are deft physical comedians, both so willing to throw themselves headfirst into any sort of gag the chance the viewer won’t find at least a small handful of things to chortle boisterously over is practically nonexistent. More, as directors the duo are so good at generating a sense of merry contentment that even moments of supposed tragedy, disappointment or anger have a craftily manufactured edge of delectable delight to them, my smile never leaving my face for even a second of the film’s 83 minutes. 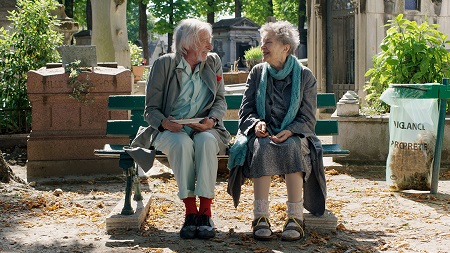 But the ace in the hole is the late, great Emmanuelle Riva. The legendary actress appears to be having an outright blast, and her continued sense of elation as she walks around wearing her flip-flops throughout the streets of Paris is giddily palpable. Gordon and Abel stage as perfect a musical number as anything I could have dreamt of, Riva and fellow French icon Pierre Richard dancing with pretty much their feet and their feet alone as they sit on a quiet bench, the beatific energy of this sequence sending my heart soaring into the stratosphere to the point I might have shed a couple of jubilant tears.

That’s Lost in Paris in a nutshell. While not particularly deep, while not too profound, Gordon and Abel are so intent on making the viewer smile, so obsessed with having each person sitting in the audience fill their hearts with happiness and love, coming up with something bad to say about the film proves to be impossible. As bits of fluffy fun are concerned this motion picture is a dance of delicious amusements, watching it an absolute pleasure I’m certain to indulge in whenever the opportunity to do so might fortuitously arise.