In 1958, longtime couple Richard (Joel Edgerton) and Mildred Loving (Ruth Negga) made the decision to get married. Driving into Washington, DC, they stood before a justice of the peace, declared their love, signed the proper papers and left with a license declaring them husband and wife. Returning to their small hometown of Central Point, Virginia, they continue to live their lives as they always have, together and openly, and while they technically do not live together in the same house it’s no secret to anyone where the two of them are spending their nights.

And that’s the problem. People know who they are. People know they are together. Most importantly, authorities know that they are married, and as Richard is White and Mildred is Black, as far as the State of Virginia is concerned, that’s not just a no-no, it’s also illegal. They want the pair out of the State, immediately and without delay, and if they ever return together, both will be sent to prison for as long as the laws on the books will allow.

What follows is a nine-year legal fight that will take the pair all the way to the Supreme Court, there historic case Loving v. Virginia leading to a unanimous decision where laws banning interracial marriage were deemed unconstitutional and where Chief Justice Earl Warren famously wrote, “Under our Constitution, the freedom to marry, or not marry, a person of another race resides with the individual, and cannot be infringed by the State.” This is the story that acclaimed writer/director Jeff Nichols’ (Mud, Take Shelter) latest masterwork Loving purports to tell, the care, restraint and authority on display as he brings it to life positively beyond compare.

What’s most remarkable is how refined the film is. Nichols follows the example set by his quietly heroic protagonists. He does not preach. He doesn’t pound a desk. He doesn’t allow intrusive musical cues to overwhelm the inherent emotions at the heart of Richard and Mildred’s ordeal, refusing to play up the inherently melodramatic nature of their journey at any point during his feature’s breathlessly paced 123 minutes. Instead, Nichols presents things as plainly and as clearly as he can, almost in a documentary-like way yet one that still runs on the passions and affections that clearly pass between the couple struggling to hang on to everything the hold dear.

What’s fascinating is how personal the movie feels. One imagines, had this film been made in the 1980s, it likely would have resembled the overblown histrionics of something like Alan Parker’s Mississippi Burning or the simplistic didacticism of Bruce Beresford’s Driving Miss Daisy. In the 1990’s, it would have resembled long-winded sermons like Steven Spielberg’s Amistad or Jonathan Kaplan’s simplistically obvious Love Field. While I actually like all of those films on one level or another, none get the job done as they should. More, they are decidedly whitewashed affairs, looking at the Black experience in America through exceedingly White eyes, and as such not nearly enough of the story ends up resonating as deeply or as passionately as it theoretically could have.

Here, Nichols ends up walking a remarkably fine line, and even though one of his principals is decidedly Caucasian, the way he allows the Black experience of the 1960s to come to life in ways that feel honest, pure and unfiltered is refreshingly genuine. Delicately, and with precision, he allows Mildred to take center stage, her apparent fragility masking a gritty determination that allows the Lovings to both return to Virginia in secret as well as become involved in the legal fight that will see their marriage validated.

As such, Negga, a wondrous young actress who has made an indelible mark in projects as diverse as Warcraft, “Agents of S.H.I.E.L.D.” and Jimi: All Is by My Side, is sublime, delivering a performance of resonance and depth that grows in scope and magnitude as the film progresses towards its triumphant conclusion. The dignity that she brings to this role, the way I could see her become more and more emboldened to do what was right for both her marriage as well as her children watching them live in constant fear, it’s just extraordinary. Negga never raises her voice, never explodes, yet this woman’s fierce tenacity is not for a single second ever in doubt, and as such it was impossible to for me to take my eyes off of her anytime she was up on the screen.

Edgerton is excellent as well, shuffling into Richard’s shoes with stunning ease, the differences between his last collaboration with Nichols, the science fiction sensation Midnight Special, released earlier this year, and this motion picture beyond night and day. There’s also able support provided by the likes of Marton Csokas as the racist county sheriff intent on seeing the Lovings’ marriage destroyed, Michael Shannon as Life magazine photographer Grey Villet, Terri Abney as Mildred’s sister Garnet and especially Sharon Blackwood as Richard’s quietly concerned midwife mother Lola. But they’re all just the tip of the iceberg, Nichols casting the film with his typically perceptive eye, making sure little feels out of place or unrealistic. 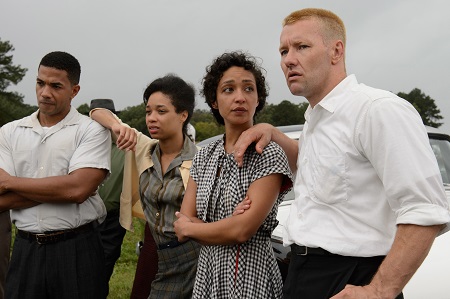 While I quite liked how the focus on lawyers Bernie Cohen (Nick Kroll) and Philip Hirschkop (Jon Bass) is downplayed, my reaction to the pair standing in front of the Supreme Court pleading the case for the Lovings was admittedly muted. The two men are never as fully developed as they maybe should have been, coming across as more of a pair of muddled, well-meaning comedic buffoons at times then they do whip-smart, up-and-coming young lawyers driven to make their mark and, hopefully, do some historic good for their clients. But Nichols knows this isn’t their story, not even partially, and while they play a massive hand in the outcome keeping the focus on Richard and Mildred gives the movie a refreshingly intimate candor that’s oftentimes all encompassing.

With all that’s happening in the world right now, Loving could not be coming out at a better time. Its story needs to be shouted from the rooftops and spread to every corner of the globe, the fight Richard and Mildred Loving calmly waged against injustice an important and vital reminder of what can be accomplished when fairness and equality are threatened and good people stand up to do what is right. See it at once.