For five years sisters Victoria (Megan Charpentier) and Lily (Isabelle Nélisse) have been missing, their father Jeffrey (Nikolaj Coster-Waldau) abducting them after committing of series of shockingly violent acts. Long presumed dead, they have been found in the middle of the woods holed up in secluded cabin apparently eating nothing but cherries and coming up with a bizarre fantasy involving a malevolent parental figure they adoringly nicknamed, “Mama.” 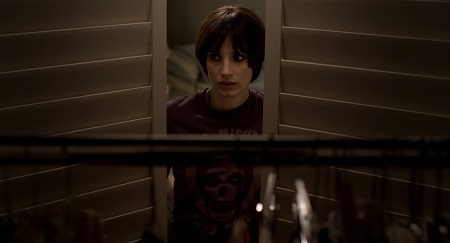 Their Uncle Lucas (also Coster-Waldau) has taken them in, assuming guardianship alongside his hard-rocking, bass-playing girlfriend Annabel (Jessica Chastain). Things are difficult, the girls having trouble assimilating back into normal everyday life. Victoria, being the oldest, has memories of what it was to have real parents, to have an adult looking out for her, but for Lily being out of the woods and away from Mama is both alien and horrific. As for Annabel, she was still in the throw of dreams involving musical superstardom, being a mother the last thing in the world she felt she was prepared for.

That’s the basics of what is going on in Mama. To know more, and that includes taking a peak at the film’s trailers or commercials so don’t do it, wouldn’t be fair, this film far too easy to reveal the secrets of. Yes, something supernatural is going on, that pretty much goes without saying. But how this presence affects Annabel and Lucas, the hold this entity has over Victoria and Lily, these things are best experienced with as little foreknowledge as possible, the twists and turns leading up to the shockingly emotional climax close to wonderful.

Not that the movie makes all the right moves. Based on their acclaimed short film, co-writer/director Andrés Muschietti and co-writer Barbara Muschietti, working alongside fellow writer Neil Cross (creator of BBC’s “Luther”), do a great job of developing the family dynamic, in showing how Annabel must evolve alongside Victoria and Lily in order to become the motherly protector they so desperately need. It’s the other stuff, the material dealing with the pompous psychologist (Daniel Kash) looking to make his name chronicling the girls’ story or the bits involving Lucas’ sister-in-law Jean (Jane Moffat), where problems arise. These drop into cliché far too easily, and where the majority of the film eschews cheap scares or maudlin theatrics almost all the segments involving them sadly revel in them.

Thankfully the good stuff outweighs the bad to such an extent I’m able to forgive these, and a few other, missteps with far more ease than I probably should admit. Muschietti crafts a Polanski-like atmosphere recalling Repulsion and Rosemary’s Baby, he and cinematographer Antonio Riestra (Black Bread) showcasing a series of eerie elongated takes where the frame is never completely visible and what is going on just to the side of the periphery is enough to send shivers down even the heartiest of spines. They use their sets to perfection, achieving a visual majesty that had me shifting uncomfortably in my seat while my palms slowly sweat. 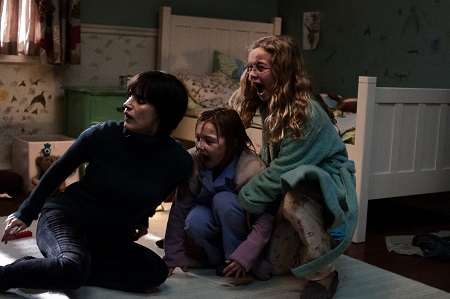 Even better, the filmmakers aren’t afraid of the material, don’t feel the need to coddle their audience or deliver comforting emotional platitudes. They take things to their ultimate breaking point, going with an otherworldly finale that’s one part Tim Burton and two parts Guillermo del Toro (which obviously makes sense considering the latter is an executive producer on the project). The gothic, unsettling fairy tale-like atmosphere, driven by Fernando Velázquez’s (The Impossible) elegant, Danny Elfman-esque score, is sublime, the insidious final images more than enough to make up for the film’s anachronistic, slightly pedestrian shortcomings.

There’s more to be said but, as I’ve already stated, to know too much about the specifics of Mama would be to ruin the haunting, atmospheric highs levied by the climax. Andrés Muschietti shows talent, both behind the camera and as a writer, same going for his sister, Barbara, and I’m incredibly eager to see what the pair might have up their respective sleeves next. This movie delivers the goods and goes for the jugular, and I have a feeling this is one ending I’m going to be debating, discussing and savoring for the rest of 2013.